Racial justice groups around the country are bailing black women out of jail so they can spend Mother’s Day with their families. For the third year in a row, Black Mama’s Bail Out Day is raising money to bail out as many black women from jail as possible. The effort is taking place in dozens of cities to call attention to the injustice of cash bail. We speak to Mary Hooks, the co-director of Southerners on New Ground, which is part of the National Bail Out collective.

StoryDec 15, 2020As COVID Surges Behind Bars in California, Why Is San Quentin Transferring Hundreds of Prisoners?

AMY GOODMAN: This is Democracy Now! I’m Amy Goodman. It’s Mother’s Day this weekend. Racial justice groups around the country are bailing out black women out of jail so they can spend the holiday with their families. For the third year in a row, Black Mama’s Bail Out Day is raising money to bail out as many black women from jail as possible. The effort is taking place in dozens of cities to call attention to the injustice of cash bail. On Thursday afternoon, two organizers, Kyla Hartsfield and Serena Sebring, chained themselves to a gate at the Durham County Jail to protest cash bail policies. One of their supporters, Grace Nichols, spoke to local station WNCN.

GRACE NICHOLS: Folks are stuck in jails because they can’t afford to get out, not because they’ve actually been convicted of a crime. So, we would like to bring attention to this ransom and show folks that it is unjust.

AMY GOODMAN: That was North Carolina. The National Bail Out collective has helped post bail for more than 300 individuals across the country. Since Black Mama’s Bail Out Day launched, there has been a growing national movement to eliminate cash bail from the criminal justice system.

For more, we’re going to Atlanta, Georgia, where we’re joined once again by Mary Hooks, the co-director of Southerners on New Ground, or SONG, which is part of the National Bail Out collective and the Movement for Black Lives.

Mary Hooks, welcome back to Democracy Now! Talk about Mother’s Day and what you’re doing.

MARY HOOKS: Hi, friend. Yeah, so we’re excited to kick off our third annual Black Mother’s Day Bail Out to continue to highlight the crisis of what’s happening to black women who are stuffed in cages because they don’t have money to pay their bail. We see that this growing movement is an indication that so many people want to see changes happen as it relates to pretrial detention. And this opportunity to bail out people and to collectivize our resources in order to do it is also an indication that many people are seeing that the solutions to the issues that are happening in our community actually lie within our communities.

We have been able to do so much over the last few years together through the National Bail Out collective and several organizations who have built political alignment around what we mean when we say we want to end cash bail and pretrial detention. So we want to see a needs-based approach to ending cash bail and to make sure that people can get back to court.

And it continues to floor me, the ways in which people continue to show up for this initiative. And yeah, we’re looking to change policy, but we’re also looking to change hearts and minds as we continue to move through this process of bailing mothers out and continuing to build the infrastructure we need in our communities to get our people out of cages and support our people as they go through the court system.

AMY GOODMAN: You’ve certainly kicked off a national movement. Reality television star Kim Kardashian West has reportedly helped release 17 people from prison in the last three months. As part of a 90 Days of Freedom campaign, Kardashian West quietly helped fund a team of female attorneys working to free first-time nonviolent drug offenders. She is also reportedly studying 18 hours a week to take the bar exam and become a lawyer herself. Talk about the significance of this. And, of course, Kim Kardashian has the ear of President Trump, was in the White House.

MARY HOOKS: Well, you know, I think, as you stated, Kim Kardashian has quietly done this, and it’s the media, however, that continues to draw attention to her efforts. But I want to take the time to shout out Miss Cody and Miss Barnett, who has been doing this work for years. And those are the two black women lawyers who have put a lot of sweat in the game in order to continue to free folk from cages. And so, shoutout to Kim for continuing to cash in her white privilege to do what must be done for the sake of other folks’ liberation. And efforts like that should continue to happen, and we should see other entertainers and celebrities get up under grassroots movements and the work that’s being led by black women, queer and trans people to free our people.

AMY GOODMAN: Talk about what happened in Durham, North Carolina.

MARY HOOKS: Yeah, so, Durham was engaged in a Mother’s Day Bail Out, as well. And as we continue to bail our people out, because we, again, must do what—we have to do what must be done, we oftentimes see local policymakers, judges, etc., who continue to shell out small solutions to a very big problem. In Durham right now, there are judges who want to implement risk assessment, want to continue to use bail schedules. None of those things benefit our communities. And so, part of our work is to agitate and escalate the crisis.

And so what my two comrades did yesterday, enchained themselves to the gates of the jail, was to say “not today, not today,” that these attacks are happening daily on our communities, and if we can intervene and interrupt that violence that’s taking place, then that’s what we’re going to do. And so, you know, the brave comrades there and all of those allies who did a sit-in inside of the jail—folks took to the street and shut down the street—like, yes, we want to bail out black mothers and continue to show love in that way, and we also show our love through the resistance that we bring to the streets and we bring to this issue to continue to push policymakers—locally, statewide, nationally— to continue to listen to what we have to say and really take heed to the solutions and the community-based solutions, as we call for divestment from the courts, cops and cages, and an investment in community-based resources and community-based support for our people.

“We Have No Reason to Trust the Police”: Sandra Bland Arrest Video Reignites Anger over Her Death

NEXT“We Have No Reason to Trust the Police”: Sandra Bland Arrest Video Reignites Anger over Her Death 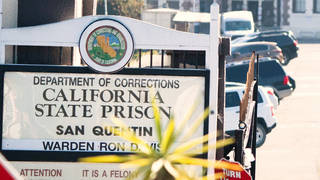