In the latest attempt by the Trump administration to squeeze the Cuban economy, the Treasury Department announced Tuesday that it is ending the people-to-people program, which has been the most popular way for Americans to visit the country, through organized group trips in spite of the embargo. Private cruises to the island will also be banned. On Wednesday, the cruise companies Carnival Corporation, Royal Caribbean and Norwegian all said they will no longer travel to Cuba, affecting nearly 800,000 bookings. In a statement, Treasury Secretary Steven Mnuchin claimed the ban is in retaliation for Cuba “providing a communist foothold in the region and propping up U.S. adversaries in places like Venezuela and Nicaragua.” Cuba supports the government of Venezuelan President Nicolás Maduro, while the U.S. has backed opposition leader Juan Guaidó and demands to overthrow the Maduro government. In April, the administration also moved to allow U.S. nationals to sue any company that does business in Cuba using private property seized during the Cuban revolution. Cuban President Miguel Díaz-Canel responded to the news by saying, “Cuba will not be frightened or distracted with new threats and restrictions. Work, creativity, efforts and resistance is our response. They haven’t been able to suffocate us. They won’t be able to stop us.” We speak with Cuban political science professor Arturo Lopez-Levy, co-author of the book “Raúl Castro and the New Cuba: A Close-Up View of Change.”

NERMEEN SHAIKH: We turn now to look at the Trump administration’s crackdown on American travel to Cuba, after the Treasury Department announced Tuesday that it’s ending the people-to-people program, the most popular way for Americans to visit the country, through organized group trips in spite of the embargo. Private cruises to the island will also be banned. On Wednesday, the cruise companies Carnival Corporation, Royal Caribbean and Norwegian all announced they will no longer travel to Cuba. The new regulations affect nearly 800,000 bookings.

In a statement, Treasury Secretary Steven Mnuchin claimed the ban is in retaliation for Cuba, quote, “providing a communist foothold in the region and propping up U.S. adversaries in places like Venezuela and Nicaragua.” Cuba supports the government of Venezuelan President Nicolás Maduro, while the U.S. has backed opposition leader Juan Guaidó and calls to overthrow the Maduro government. On Tuesday, national security adviser John Bolton tweeted, quote, “The Administration has advanced the President’s Cuba policy by ending 'veiled tourism' to Cuba and imposing restrictions on vessels. … Cuba has continued to prop up the illegitimate Maduro regime in Venezuela and will be held responsible for this ongoing man-made crisis. President Trump has made it clear that we stand with the Cuban and Venezuelan people as they fight for freedom,” Bolton tweeted.

AMY GOODMAN: The move is just the latest attempt by the Trump administration to squeeze the Cuban economy. In April, the administration moved to allow U.S. nationals to sue any company that does business in Cuba using private property seized during the Cuban revolution. The president of Cuba, Miguel Díaz-Canel, responded to the news by saying, quote, “Cuba will not be frightened or distracted with new threats and restrictions. Work, creativity, efforts and resistance is our response. They haven’t been able to suffocate us. They won’t be able to stop us,” he said.

Many Cubans were also critical of the move. This is artisan Angel Millo.

ANGEL MILLO: [translated] I think Trump’s policy is wrong, because it’s just like what other United States presidents have done. And the reality is that it affects the Cuban population and not the government. The Cuban people are affected by these arbitrary measures, that not only affect us, but I imagine it also irritates Americans, because it’s limiting them from getting to know the culture in our country.

AMY GOODMAN: For more on the impact of the Trump administration’s policies, we go to Charlottesville, Virginia, to speak with Cuban political science professor Arturo Lopez-Levy. He teaches at Gustavus Adolphus College in Minnesota. He’s co-author of the book Raúl Castro and the New Cuba: A Close-Up View of Change.

Welcome to Democracy Now!, Professor. Can you start off by talking about this latest crackdown on Cuba, what exactly it means for your country?

ARTURO LOPEZ-LEVY: Amy, this crackdown basically means banning educational and cultural group trips to Cuba. The purpose is, according to the administration, to stop what they call “veiled tourism.” But, in reality, what they are trying to do is to stop contacts between the peoples of Cuba and the people of the United States.

NERMEEN SHAIKH: And what impact do you think this will have on people in Cuba, not just the ban on travel, but the other policies put in place by the Trump administration, including the sanctions, of course?

ARTURO LOPEZ-LEVY: Yeah. Well, the first is a very negative impact all over the board. First, it will reduce the contacts in a moment when the country is at a critical juncture. The country is currently going through an important process of reform. Recently, the country approved a constitutional reform. And there are very important issues, such as a transition to a mixed economy, with an important interaction between state government property and the nonstate sector, that it’s basically creating a new country, in the sense that private people cooperatives are having an impact in an economy that has been stalled because of the command structure that it used to have.

Second, it’s also—you know, it is a moment of a great debate of ideas, because the Castro era is ending. And although the successor or the new generation in the leadership has claimed that it’s basically about continuity, together with this continuity there is a lot of change. And in a more tangible way—in a more tangible way, a very important issue is that it’s reducing the hard currency that the country is receiving, particularly this emerging private sector.

AMY GOODMAN: In an interview with PBS NewsHour in April, national security adviser John Bolton was asked why he tweeted that the Monroe Doctrine was, quote, “alive and well.” This was his response.

JOHN BOLTON: Many U.S. allies in this region, in this hemisphere, those closest to us, welcome the U.S. leadership here, under President Trump, to keep foreign powers from extending their influence, particularly in Venezuela, which is what I was referring to when I said the Monroe Doctrine is alive and well. It’s intended to throw a shield around the hemisphere. It’s worked for a long time. And I think it’s an important doctrine to keep in mind as we work for the objective that President Trump seeks here, which is the first completely free hemisphere in human history. We’re not embarrassed by that.

AMY GOODMAN: And in November, Bolton said Cuba was part of a “troika of tyranny.”

JOHN BOLTON: The troika of tyranny in this hemisphere—Cuba, Venezuela and Nicaragua—has finally met its match. … This troika of tyranny, this triangle of terror stretching from Havana to Caracas to Managua, is the cause of immense human suffering, the impetus of enormous regional instability and the genesis of a sordid cradle of communism in the Western Hemisphere.

AMY GOODMAN: So, that’s the national security adviser, John Bolton. Arturo Lopez-Levy, if you can respond to what he has said, as he talks about trying to stop communism, having a first free hemisphere in the world? Can you respond to all of this and this troika of tyranny that he is talking about, putting together Cuba with Nicaragua and Venezuela?

ARTURO LOPEZ-LEVY: Well, this reference to the Monroe Doctrine and this reference to a troika of tyranny is simply red meat to a crowd that was in Miami when he made those speeches. This is the use of American foreign policy for electoral purposes, 100%.

And obviously, the Monroe Doctrine is a reference in history to a lot of bad things that has happened in the relationship between the United States and the hemisphere. And it is part of a history that doesn’t exist anymore, because the United States is not anymore the only country that—or the country which almost all trade of Latin American countries is oriented. China is the first trade partner of Brazil, of Peru, of Chile. And in the case of Cuba, I think that there are 60 years that has demonstrated that the decisions in Cuba are taken in Havana, not in Washington.

NERMEEN SHAIKH: Well, earlier this year, The Wall Street Journal reported the U.S.-backed effort to oust Venezuelan President Nicolás Maduro is just the first step in the Trump administration’s plan to reshape Latin America, with Cuba next on its radar. The report suggested the U.S. would announce new measures against Cuba, including new sanctions, and would also restore Cuba’s designation as a state sponsor of terrorism. According to The Wall Street Journal, the U.S. then plans to target Nicaragua. In November, national security adviser John Bolton dubbed the three nations the “troika of tyranny.” In January, Vice President Mike Pence said that President Trump is, quote, “not a fan” of U.S. interventions abroad, except for in “this hemisphere.” So, Arturo, could you respond to that, and what you see happening next?

John Bolton is a protégé of Jesse Helms. And he had been—it’s also that it’s fair to say that he has followed on the steps of his mentor. He has a vision about left and right, that it’s very, very much on the right—I would say, to the right of Genghis Khan—in the vision that he has about the political forces in Latin America. And, obviously, they have tried to push as much as possible for policies that are not clear to me that they are in line with international law or even with the purpose of—the national interests and the values of the United States.

There is now this tape of Mr. Pompeo talking to some leaders of Jewish organizations, in which he even admits that those ideas about using the Venezuelan opposition to put the Maduro government out of the game were excessively optimistic.

AMY GOODMAN: Arturo Lopez-Levy, we want to thank you for being with us, Cuban political science professor at Gustavus Adolphus College, co-author of the book Raúl Castro and the New Cuba: A Close-Up View of Change.

When we come back from break, nearly a hundred animal rights activists are free today after being arrested for carrying out what they call a rescue mission at a [Northern California] duck farm they say tortures animals. We’ll speak with leading animal rights activists Priya Sawhney and Wayne Hsiung. He was just released from jail. They both face years in prison for different actions. Stay with us. 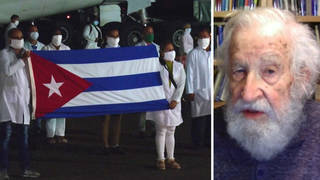