The missiles were launched from inside Iran. Iraq says Iran warned them ahead of the attacks, which struck the Al Asad Airbase in the western province of Anbar and a base near Erbil in northern Iraq. Senior Iraqi officials say there were no American or Iraqi casualties in the strikes.

This is Iranian Foreign Minister Javad Zarif speaking after the missile attacks.

Only hours after the launch of the missiles, a Boeing 737 jet crashed shortly after takeoff from Tehran’s international airport, headed to the Ukrainian capital Kiev. The crash killed all 176 people on board, including 82 Iranians and 63 Canadians. Iranian media reported the crash was due to technical difficulties. The jet was a predecessor to Boeing’s flawed 737 MAX passenger jet, which has been grounded worldwide following two deadly crashes that killed 346 people.

This all comes as the United States is deploying about 4,000 U.S. soldiers from the 82nd Airborne Division based out of Fort Bragg, North Carolina, to Kuwait. This is military spouse Katie Fernandez.

Katie Fernandez: “So, the thought of my husband being on a plane to a war zone by the end of the day is — it’s shocking, even to us, even though it’s his job. Technically, this is not. It’s not the job that we’re used to. So, it is very sudden and unexpected and traumatic to the military families and the community here, because this is not something that we have seen, at least in the last 10 years or so.”

We’ll have more on the latest on the U.S., Iraq and Iran after headlines. 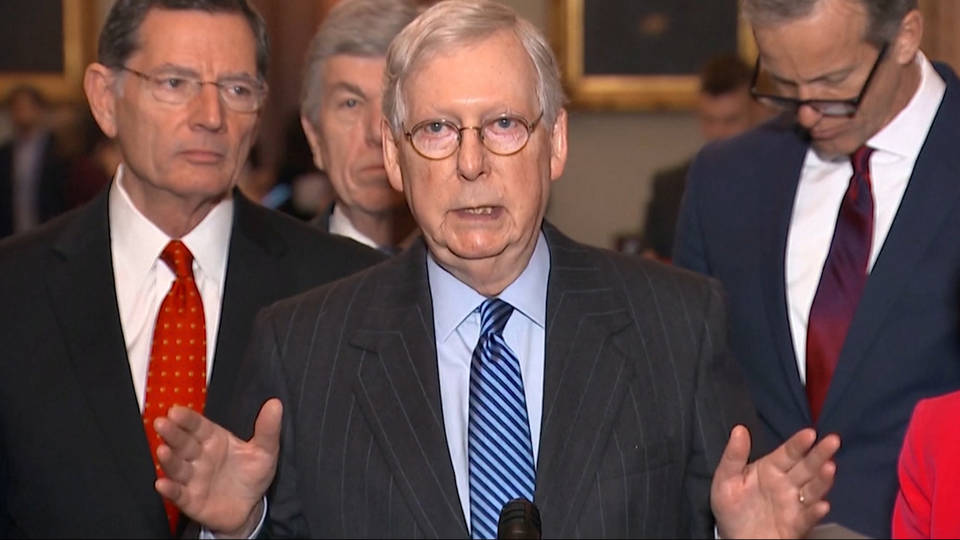 On Capitol Hill, Senate Majority Leader Mitch McConnell says he has enough votes from Senate Republicans to begin President Trump’s impeachment trial without the support of Senate Democrats. McConnell is pushing to open the trial with only an initial agreement to hear arguments from the prosecution and defense — not a guarantee to hear witnesses. Democratic lawmakers are demanding McConnell and Senate Republicans agree to call witnesses in the Senate trial, because some high-level witnesses called by the House during its impeachment process refused to comply with the congressional subpoenas to testify, at the direction of the White House. Former national security adviser John Bolton now says he would comply with a subpoena to testify in the Senate trial, if he is called to do so. House Speaker Nancy Pelosi is continuing to withhold the articles of impeachment in efforts to pressure Senate Republicans to call witnesses, although there is speculation McConnell could try to open the trial without the articles. President Trump has signed an emergency declaration for Puerto Rico, after a 6.4 magnitude earthquake killed at least one person and sparked a massive power outage that plunged nearly the entire population into darkness Tuesday. It’s the largest earthquake to hit Puerto Rico in more than 100 years and follows a series of strong quakes that have rattled the island in recent days. Flattened homes and inoperable power plants have left nearly 350 people homeless and at least 300,000 without drinking water. This is one Puerto Rico resident, Josefina Betancourt Pacheco.

Josefina Betancourt Pacheco: “Horrible, horrible, horrible, horrible. Everything fell on top of us. We went out to the street, and getting there was an odyssey because everything had fallen on the road. It’s really hard to see so many houses around you on the ground. It’s not easy, but, to the glory of God, we’re alive.” In Spain, lawmakers are poised to form Spain’s first progressive coalition government since the 1930s, after a narrow Parliament vote Tuesday. The leader of Spain’s Socialist Party, Prime Minister Pedro Sánchez, has agreed to form a coalition government with Pablo Iglesias, the head of the leftist Podemos party. A group of pro-independence legislators from Catalonia made it possible by abstaining. The Nation magazine reports Spain’s new coalition government has promised to strengthen job security and unions, raise the minimum wage, pass legislation to curb climate change, and introduce universal public child care. In Argentina, the leftist government of President Alberto Fernández has withdrawn credentials for the Venezuelan ambassador of U.S.-backed opposition figure Juan Guaidó — reversing the stance of former right-wing President Mauricio Macri. Elisa Trotta Gamus was recognized as the legitimate ambassador of Venezuela by Macri last year, as Guaidó self-appointed himself as president and attempted to overthrow elected Venezuelan President Nicolás Maduro. In a two-sentence letter addressed to Trotta Gamus, the Fernández government notified it was “putting an end to your special mission in the Argentine Republic.” 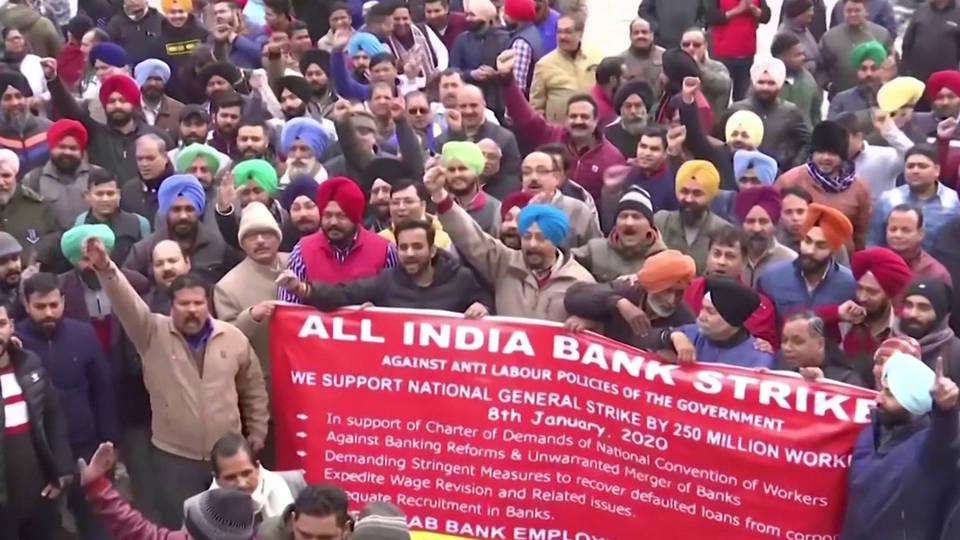 In India, hundreds of thousands of unionized workers and students took to the streets today for a strike to demand a rise in the minimum wage and to protest the privatization of natural resources. Many students are also boycotting classes in solidarity with violent attacks on students at Delhi’s Jawaharlal Nehru University, who blamed the attack on a right-wing student group linked to Prime Minister Narendra Modi’s ruling BJP party. This is one of the protesters today, Rajbir Singh.

Rajbir Singh: “Today, the whole of India is observing a shutdown. All the banks of the country are shut. This is against the central federal government’s privatization and anti-employee policies.” 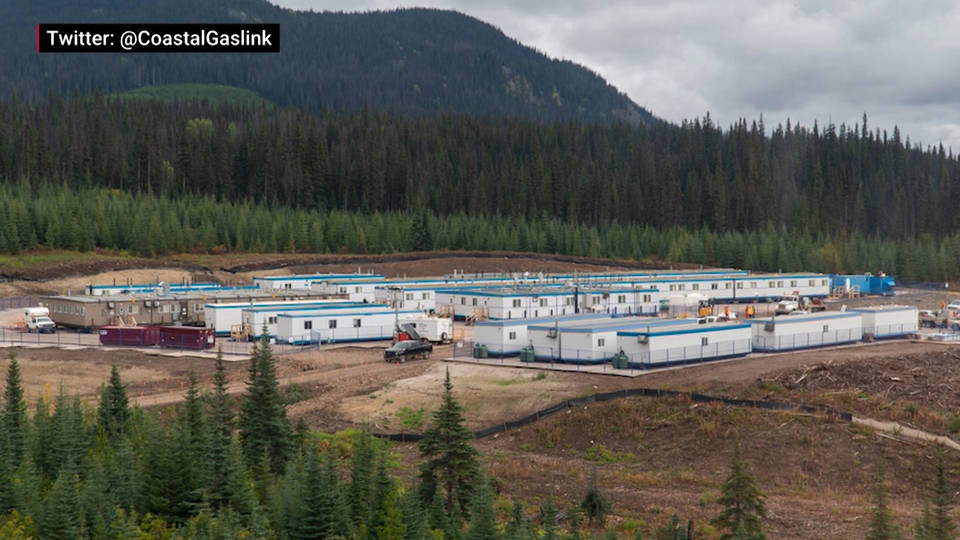 In Canada, indigenous leaders issued an eviction notice to the workers of a pipeline company seeking to build a $6.6 billion gas pipeline through First Nations territory in British Columbia. In a press release, five clans of the Wet’suwet’en Nation said Coastal GasLink had violated the nation’s trespassing law and “has bulldozed through our territories, destroyed our archaeological sites, and occupied our land with industrial man-camps. … The ongoing criminalization of our laws by Canada’s courts and industrial police is an attempt at genocide.” On Saturday, Coastal GasLink workers reportedly complied with the eviction notice and vacated the worksites. But Reuters reports construction of the pipeline resumed Tuesday. In Delaware, a teenager reportedly threw an incendiary device at a Planned Parenthood building early Friday morning, sparking a fire at the clinic. Authorities have charged 18-year-old Samuel James Gulick with three criminal counts, including intentionally damaging a facility that provides reproductive health services. He faces up to 20 years in prison.

NYT: More Than 20 Shootings at After School Sports Events in Last 6 Months A New York Times analysis reveals there have been shootings at or around after-school sporting events nearly once a week across the country this academic year. The more than 20 shootings at football, basketball and other games have largely gone overlooked in the discussion around the epidemic of school shootings in the United States. Among the victims was Micah Tennant, who was fatally shot in November while attending a high school football game in Pleasantville, New Jersey. He was 10 years old.