Hundreds protested outside the Senate Monday against the confirmation hearing for President Trump’s Supreme Court nominee, Judge Amy Coney Barrett. At least 21 were arrested after staging a sit-in to oppose the Senate pushing through Barrett’s nomination in the middle of the presidential election. Senate Democrats warn the federal judge’s record suggests she would overturn the Affordable Care Act and threaten reproductive rights if she takes the seat left vacant by the late Justice Ruth Bader Ginsburg. “Trump and the Republicans are trying to execute a power grab,” says Ana María Archila, co-executive director of the Center for Popular Democracy, who joins us from the steps of the U.S. Supreme Court ahead of another day of protests. Amid the coronavirus pandemic, she says lawmakers should instead focus on doing “everything they can to provide urgent relief to millions of people.”

AMY GOODMAN: We’re beginning today’s show in Washington, D.C., in front of the Supreme Court, where hundreds protested outside the Senate Monday against the confirmation hearing for President Trump’s Supreme Court nominee, Judge Amy Coney Barrett. At least 21 people were arrested after staging a sit-in to oppose the Senate pushing through Barrett’s nomination in the middle of the presidential election. Some held signs reading “No COVID test, no hearing,” as they faced off with pro-Amy Coney Barrett protesters who had also gathered outside the Senate. Chants of “Let the people decide” rang out from the Senate steps.

Meanwhile, inside the hearing, as members of the Senate Judiciary Committee made their opening statements, Democrats argued Amy Coney Barrett’s nomination poses a threat to the Affordable Care Act, which will be considered by the Supreme Court on November 10th. In a united front, many Democrats spoke alongside large posters showing the faces of people who rely on the Affordable Care Act for coverage, arguing Barrett’s confirmation could mean the end of healthcare for millions during the pandemic.

Barrett’s four-day hearing is taking place in person, even after the White House ceremony where her nomination, announced less than two weeks ago, was labeled a coronavirus superspreader event. Republican Senator Mike Lee, who recently tested positive for COVID-19 after attending the White House celebration, spoke at the hearing without wearing a mask. And the Senate Judiciary Committee Chair Lindsey Graham, who refused to take a test right before this hearing, presided.

For more, we go to the steps of the Supreme Court in Washington, D.C., where we’re joined by Ana María Archila. She is co-executive director of the Center for Popular Democracy. She joined Monday’s protest and will be protesting again today.

Welcome back to Democracy Now!, Ana María. One of the times we had you on was when you weighed in heavily in the Brett Kavanaugh Supreme Court nomination hearings, as you stuck your foot in that door of the elevator that Senator, at the time, Flake was traveling in, to demand that a man who was accused of sexual assault would not move forward until that was investigated. But you’re out there again. Can you explain why?

ANA MARÍA ARCHILA: Thank you so much for having me, Amy. Good morning.

Well, we are here again because Trump and the Republicans are trying to execute a power grab. They are rushing to confirm a Supreme Court justice now even though people are voting right now. Over 10 million people have already voted, and millions more are voting every single day. And even though we are less than a month away from the end of election season, Trump is trying to install a Supreme Court justice.

And he has told us why. He has said that he wants a majority in the Supreme Court when he challenges the ballots, when he challenges the results of the elections. And he’s trying to also finish — complete the promise that he made to his donors and his base at the beginning of his administration. He said he wanted to end the ACA, Obamacare. And guess what. Having a majority, a conservative majority, on the Supreme Court will allow him to do that. In fact, the Supreme Court is scheduled to do hearings or to hear oral arguments on the ACA on November 10th.

So, this is an incredible power grab that has terrible consequences for people across this country, especially people who rely on the ACA and who need access to healthcare in the middle of a pandemic.

JUAN GONZÁLEZ: Well, Ana María, what about, though, the argument of the Republicans that, one, that the president is in office until the end of the year, and the Senate can still legally act on a nomination to Supreme Court? It’s true it is, as you say, a naked power grab. But what do you say to their argument and also to the issue that, so far at least, both Kamala Harris and Joe Biden have dodged in the debate questions? Do you believe, if this moves forward, that the Democrats should, if they seize control of both the White House and the Congress, expand or democratize the Supreme Court by adding more seats?

ANA MARÍA ARCHILA: Well, the Republicans are not concerned at all with their hypocrisy, because in 2016 they themselves staged a very fierce opposition to Obama’s effort to fill an empty Supreme Court seat and prevented him from doing so and said that they weren’t going to allow that confirmation because it was election year, even though it was many, many months before Election Day. And, in fact, Amy Coney Barrett has some clips where she appears and she’s herself presenting that argument to the American people.

What they are doing every single day is nominating judges and confirming conservative judges. And they have taken over the courts, up and down the federal bench, in an effort that has been incredibly steady and incredibly aggressive. And, of course, like, the courts are an essential part of our democracy. They need to be places where people can bring their quarrels and they can be resolved in favor of people. With courts — the kind of takeover of the courts that the Republicans have maneuvered and achieved over the last four years is incredibly dangerous for the rights of women to control what we do with our bodies and to decide our destiny. It’s dangerous for workers. It’s dangerous for people who want government to be a source of support.

And so, we think that it is actually absolutely necessary for Democrats to be thinking about how to rebalance the courts, how to democratize the courts and how to make them a place where people can bring their demands and where they can find justice, which right now with a conservative majority up and down the federal bench will be extremely hard.

AMY GOODMAN: The Affordable Care Act is up for oral arguments at the Supreme Court on November 10th. If the schedule for this vote goes forward, the Senate Judiciary Committee will be — the Senate Judiciary is on September 22nd, and then, on September 29th, the full Senate, supposedly with people pulled back. It looks like it could move forward at that point, barring any surprises.

I think we’ve actually just lost Ana María Archila, so we’re going to put that question to our next guest when we come back from break. Ana María Archila is co-executive director of the Center for Popular Democracy. She’s standing on the steps of the Supreme Court. Also, there have been protests in front of the Senate. We’ll be back with Lisa Graves in a moment. 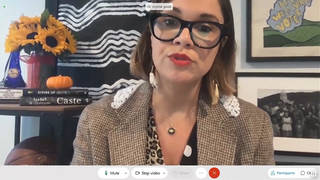