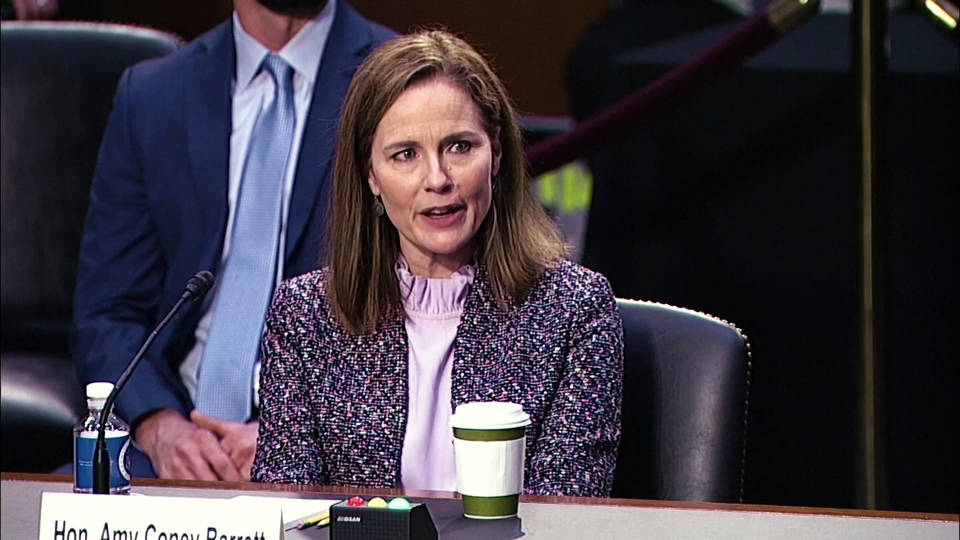 Back in the United States, Supreme Court justice nominee Amy Coney Barrett faced eight more hours of questioning on Wednesday as Republicans race to confirm her before the election. Barrett is a right-wing judge who once clerked for Antonin Scalia. If confirmed, Barrett will give conservatives a 6-3 majority. On Wednesday, Barrett refused to say if she thinks climate change is happening, when questioned by Democratic Senator Kamala Harris, Joe Biden’s running mate.

Sen. Kamala Harris: “And do you believe that climate change is happening and is threatening the air we breathe and the water we drink?”

Judge Amy Coney Barrett: “Senator, again, I was wondering where you were going with that. You have asked me a series of questions, like, that are completely uncontroversial, like whether COVID-19 is infectious, whether smoking causes cancer, and then trying to analogize that to eliciting an opinion on me that is a very contentious matter — opinion from me that is on a very contentious matter of public debate. And I will not do that. I will not express a view on a matter of public policy, especially one that is politically controversial, because that’s inconsistent with the judicial role, as I have explained.”

Sen. Kamala Harris: “Thank you. Thank you, Judge Barrett. And you’ve made your point clear that you believe it’s a debatable point.”