Two members of a Kentucky grand jury convened after the Louisville police killing of Breonna Taylor have spoken on camera for the first time, calling the actions of the Louisville officers responsible for Taylor’s death “criminal” and saying the state’s Republican Attorney General Daniel Cameron never gave them the option to consider murder or manslaughter charges against the police officers involved. “From the very beginning, we have seen a campaign of prevarication, of dishonesty, of outright neglect of any semblance of justice for Breonna Taylor or for her family,” responds Marc Lamont Hill, professor of media studies and urban education at Temple University, who notes that in lieu of justice, her family at least deserves accountability.

StorySep 24, 2020An Indictment of the System: Protests Erupt as Cops Cleared for Killing Breonna Taylor in Her Home

AMY GOODMAN: I wanted to end our discussion not in Pennsylvania, Marc, but you cover police brutality issues all over the country. And I wanted to end in Louisville with this latest development. You have a judge ruling that members of the grand jury can speak. And so, two members of the grand jury convened after the police killing of Breonna Taylor have spoken on camera for the first time, calling the actions of the Louisville officers responsible for Taylor’s death “criminal.” The two jurors say Kentucky’s Republican Attorney General Daniel Cameron never gave them the option to consider murder or manslaughter charges against the Louisville police officers involved in Taylor’s killing. The pair had their identities concealed as they spoke to CBS’s Gayle King in an interview that’s airing today.

GAYLE KING: Can I ask you what you both think of the police behavior and actions that night?

JUROR 1: They couldn’t even provide a risk assessment. And it sounded like they hadn’t done one. So their organization leading up to this was lacking. That’s what I mean by they were negligent in the operation.

JUROR 2: They were criminal. Leading up to this, in everything that they — the way they moved forward on it, including the warrant, was deception.

AMY GOODMAN: So, Professor Marc Lamont Hill, can you talk about the significance of this, given that Daniel Cameron, Kentucky’s attorney general, who spoke at the Republican convention, when he held his news conference, he said this was an independent grand jury, they made the decision. The only charges that were brought were against one of the white police officers, not for the death of Breonna Taylor, but because some of his bullets went into the apartment of the neighbors, who were white.

MARC LAMONT HILL: Neighbor, yeah. It’s disturbing, and it’s disgusting, but, unfortunately, it’s not surprising. From the very beginning, we have seen a campaign of prevarication, of dishonesty, of outright just, you know, neglect of any semblance of justice for Breonna Taylor or for her family.

When Daniel Cameron came out after the decision was made not to do anything, he had the crocodile tears. He had the explanation that he did all that he could. And he gave us the impression that the grand jury was acting independently, that they were simply acting on their own volition and that they looked at all the evidence and made the best choice that they could. And we always had skepticism. No one believed him. And now what we have is evidence, hardcore evidence, that proves that.

But this does stand to reason, given that Daniel Cameron is a Republican prosecutor who is attempting to leverage this moment into a bigger moment. And the way to leverage a bigger moment as a Black Republican, quite frankly, is to show that you’re willing to lock up Black people, that you’re indifferent to their suffering, and that you’re willing to support the state, and specifically law enforcement, in cases like this. So he will ascend very quickly if, God forbid, there were another Trump administration. I wouldn’t be surprised to see him as an AG. I mean, that’s how far he could go, given this process.

And so, again, I’m not saying it’s a conspiracy. I’m saying that there’s a very clear — there’s a very clear angle here politically. And there’s hardcore evidence to suggest that Breonna Taylor should have gotten — let’s not call it “justice.” Justice would be her being alive. But at the very least, there should be some sense of accountability for those who killed her, that even the grand jurors are saying. And I think the more we unravel this, the more ugliness we’re going to find. And hopefully we can get another crack at this, because this is one of the most sort of gross and disturbing public demonstrations of injustice in the so-called criminal justice system.

AMY GOODMAN: Marc Lamont Hill, we want to thank you for being with us, professor of media studies and urban education at Temple University in Philadelphia, his forthcoming book, We Still Here: Pandemic, Policing, Protest, and Possibility.

When we come back, we will go to Chile to talk about the precedent-setting vote that just took place for a new constitution. Stay with us. 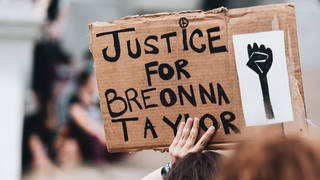 An Indictment of the System: Protests Erupt as Cops Cleared for Killing Breonna Taylor in Her Home