Pandemic Poverty: The CARES Act Kept Millions from Going Hungry. Why Won’t the Senate Renew It?

The massive $2 trillion CARES Act — which sent households one-time payments and boosted unemployment checks with an additional $600 a week through July — helped keep millions afloat, but more than 8 million people have been forced into poverty since the aid ended. “The relief was temporary, and much of it has now expired, so now we’re seeing poverty rise again,” says Megan Curran, a researcher at the Center on Poverty and Social Policy at Columbia University. “We know that families can be protected again, but it does require action at the federal level.”

AMY GOODMAN: This is Democracy Now! The Quarantine Report. I’m Amy Goodman, with Nermeen Shaikh, as we continue to look at growing poverty in the United States. This week, Majority Leader Mitch McConnell adjourned the Senate without a new stimulus bill and won’t reconvene until November 9th. President Trump said Tuesday any deal on a new relief package would have to wait until after the election.

This comes as more than 54 million U.S. residents are struggling to afford food, according to the hunger relief organization Feeding America, and a new report finds more than 8 million people have been forced into poverty just since May. That’s when the additional federal aid that kept millions afloat during the early months of the pandemic ended. Black and Latinx people, as well as children, have been particularly impacted. A new report finds the massive $2 trillion CARES Act, which sent households one-time payments and boosted unemployment checks with $600 additional a week through July, helped keep millions out of poverty. But since the additional aid has ended, the number of poor people has surged.

For more, we’re joined by Megan Curran with the Center on Poverty and Social Policy at Columbia University. She has co-authored the report on increasing poverty rates in the U.S. during the pandemic.

Welcome to Democracy Now!, Megan. It’s great to have you with us. Just lay out the report’s horrific findings.

MEGAN CURRAN: Sure. Thanks very much for having me.

What myself and my colleagues at the Columbia Center on Poverty have been trying to do is track the real-time effect on families of the continuing crisis. One of the biggest challenges is that the way we traditionally measure poverty in this country is on an annual basis, and there’s usually a time delay. So, that’s imperfect in normal times, but we know that 2020 is far from normal, and so it’s something that calls for new tools.

What we’ve tried to do most recently is estimate the monthly poverty rates in the U.S., so trying to look at what happened when families went out of work very sharply, but also what happened when the federal relief came in. And we found three main things.

The first is that Congress did the right thing early on, with the CARES Act, in particular — the stimulus checks and the expanded unemployment benefits. The combination prevented what could have basically been the worst spike in poverty in 50 years.

The second thing, however, is the bad news, which is that these successes are quickly being lost. The relief was temporary, and much of it has now expired. And so now we’re seeing poverty rise again.

But the third piece is kind of a silver lining in that we know what works now, you know, getting cash out to households directly, and so we know that families can be protected again, but it does require action at the federal level.

NERMEEN SHAIKH: And, Megan, can you talk specifically about the impact of this poverty on children? Two-and-a-half million children have been pushed into poverty since May. Is that right?

MEGAN CURRAN: Yeah. So, you know, the important thing to note is that child poverty in the U.S. even before the crisis hit was high and, you know, arguably much too high for as wealthy a nation as we are. You know, in the years coming up to it, even when the economy appeared strong, we had more than 13 million children living below the poverty line. And just to put that in context, we’re talking about trying to get by on about $28,000 a year for a family of four if you’re in sort of an average-cost city. And so, it’s not a generous level that we’re talking about, but so many children were already living below that number. And we have now seen yet another two-and-a-half million children fall below that income level just since May. And we know that also it’s not hitting all kids equally. The gap in poverty is stark between — for Black and Latino children, it’s two-and-a-half times higher than it is for whites, for white children. And so, we need to recognize that this was a problem beforehand, but it has been seriously exasperated — excuse me, it has been seriously magnified by this crisis.

NERMEEN SHAIKH: And, Megan, as you mentioned, Congress made the right decision early on in passing the CARES Act, which was the largest economic stimulus package in U.S. history, but there were a number of people who were excluded from the CARES Act. Could you talk about who was excluded and what the impact of that exclusion has been on them?

MEGAN CURRAN: Yeah, the CARES Act, in our analysis and other researchers who have been looking at this, is found to be, you know, so important and really temporarily successful for families that were able to receive it. But we know that, unfortunately, some, even though they were technically eligible, were at risk of not receiving it. There were about 12 million individuals identified who were at risk of maybe not receiving the stimulus check even though they were eligible for it. And that’s because they may not have filed taxes recently, because they have such low incomes that they were not required to do so, that it required a lot of extra steps and the onus on the families themselves to figure out that they actually needed to apply for it. That put them at risk for not receiving it.

But there were also a number of folks who were just explicitly left out of the legislation when it was passed. So, that ranged across a couple different population groups. We saw high school and college students left out of the stimulus checks. If they were over the age of 17 and still claimed as a dependents for tax purposes, which most of them were because they’re still in school, by their families, they were left out of the checks, right at the same time that they were facing rapidly increasing costs with having to switch to virtual learning overnight and all of these things. We know some — and that was about 10 million 17-to-24-year-olds across the country who were left out.

We know another 5 million older adults with serious health issues also were left out of the stimulus checks, again because they’re claimed as dependents. They can’t live alone, in many instances. They and their carers did not receive emergency assistance for them.

And one of the biggest populations that was excluded was children and adults in immigrant families. And about 15 million, it’s estimated, individuals in immigrant families were left out. And, you know, most of these kids would have been U.S. citizen children. But the exclusions were particularly harsh here, because if just one adult in the family did not have a Social Security number, no one in the family, regardless of citizenship status or green card status, were able to receive the payment. And so, that has huge applications for families in every state.

AMY GOODMAN: What should a new stimulus package look like? And we only have a minute, Megan Curran. I mean, you have, since the beginning of the pandemic, enormous wealth inequality. The wealth of U.S. billionaires has surged $931 billion. And yet, when you look at the number of people who have not only plunged into poverty, but hunger, how do you correct this? And we’ve seen also an enormous corporate bailout.

MEGAN CURRAN: Yeah, I think what we need to recognize is that we need to get more cash to families, and it needs to be accessible to as many families as possible, without exclusions, and it needs to be consistent. We know that another one-time check, while very welcome for many families, isn’t going to be enough. Continuing unemployment benefits, the $600 top-up weekly payments, along with the expansions that included those who are usually not covered, need to be continued. We need to get regular cash assistance on a monthly basis, if not more frequent, if possible, to families who are not covered by unemployment. And we need to make sure that there are other protections in place, increased access to food for kids. You know, you can increase the SNAP benefit levels. You can put in more housing protections so that there’s rent relief and protections against evictions. And basically, you just need to make sure that families know that they can count on this for the duration of the crisis, because we’re seeing, with continued unemployment claims and continued surges in cases, this crisis is not going away right now, and so the relief needs to be in place for as long as families need it.

AMY GOODMAN: Megan Curran, we want to thank you for being with us, at the Center on Poverty and Social Policy at Columbia University. We’ll link to your report on increasing poverty in the U.S. during the pandemic.

And a reminder: This Tuesday, November 3rd, election night, Democracy Now! will air a three-hour election night special from 9 p.m. Eastern to midnight. We’ll be covering results from the presidential election to congressional and state races, as well as ballot initiatives. You can watch it at democracynow.org, or you can ask your station to run it, as many are across the country.

That does it for our broadcast. Special thanks to Julie Crosby, Renée Feltz, Mike Burke, Deena Guzder, Libby Rainey, Nermeen Shaikh. I’m Amy Goodman, with Nermeen Shaikh. Thanks so much for joining us. 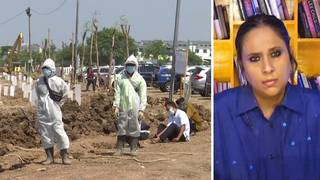