Republicans have aligned behind President Trump as he continues to make baseless accusations of widespread voter fraud and refuses to concede that he lost the presidential election to Joe Biden. Senate Majority Leader Mitch McConnell defended President Trump’s decision not to concede, and Attorney General William Barr upended long-standing Justice Department policy by announcing federal prosecutors could investigate “specific allegations” of voter fraud, a move that led to the resignation of Richard Pilger, the director of the Justice Department’s Election Crimes Branch. The Trump campaign has launched a barrage of lawsuits seeking to invalidate last week’s election results, including one in Pennsylvania attempting to block state officials from certifying Joe Biden’s election victory. So far no evidence has emerged of voter fraud as alleged by the Trump campaign. “This is an unprecedented attack on democracy,” says Kristen Clarke, president and executive director of the Lawyers’ Committee for Civil Rights Under Law. “The voters have spoken, and what we’re seeing is a president who refuses to recognize and embrace the will of the people.”

MAJORITY LEADER MITCH McCONNELL: And President Trump is 100% within his rights to look into allegations of irregularities and weigh his legal options.

AMY GOODMAN: The Trump campaign has so far filed suits in Pennsylvania, Georgia, Wisconsin, Michigan, Arizona and Nevada. Many of them have been thrown out, but no evidence of widespread voter fraud has emerged. In Pennsylvania, a group of Republican legislators are demanding the state not certify the election or seat electors until a legislative-led audit of the 2020 election is completed.

We’re joined now by Kristen Clarke, president and executive director of the Lawyers’ Committee for Civil Rights Under Law.

Kristen, welcome back to Democracy Now! Can you talk about the significance of what’s taking place right now?

KRISTEN CLARKE: This is an unprecedented attack on democracy. The voters have spoken, and what we’re seeing is a president who refuses to recognize and embrace the will of the people.

There are a number of lawsuits, as you have observed, that have been filed in a handful of states across the country. Many of these cases are dead on arrival, meaning they are dismissed as quickly as they are filed. They are quietly withdrawn. None of these cases have borne out. And many of these cases are filed without proof, without documentation to substantiate these claims of fraud. In Arizona, we saw a case a few days ago that was filed alleging that the use of a Sharpie pen by voters should disqualify a ballot cast by an eligible voter. That case was quickly withdrawn, repackaged and filed in another court. We saw a case filed in federal court yesterday in the Middle District of Pennsylvania. This case cherry-picks a few counties and alleges that things like the curing of ballots, where voters may have made minor errors on an absentee ballot envelope, for example, should disqualify the voices of eligible voters, again, in these cherry-picked counties.

We’re kind of nearing very close to the brink of a constitutional crisis. The Bush v. Gore situation was very different. There, we were focused on one state where there was a differential of just a few hundred ballots. But here we’re talking about several states where the popular vote margin nationally is widening by the day. So, at this point, we’re really standing in the way of a smooth transfer of power, because each day that these baseless and unsubstantiated claims of fraud are allowed to go forward, it stands in the way of President-elect Biden being able to move forward with his transition, which we know is incredibly important given the current state of crises that we face in the country with respect to the pandemic, the economic crisis and more.

JUAN GONZÁLEZ: And, Kristen, I wanted to ask you in particular about Pennsylvania, which was the state, obviously, that put Joe Biden over the top in terms of Electoral College votes. A coalition of 10 Republican attorneys general filed an amicus brief Monday asking the Supreme Court to hear the case regarding the dispute over the deadline of mail-in ballots. And the Supreme Court had previously sort of kicked this down the road, because it was tied 4-4 at the time in terms of whether they would actually hear the merits of this case. But there’s questions as to whether there are even, in the mail-in ballots, sufficient numbers to actually affect the results. Could you talk about the specifics of that case?

KRISTEN CLARKE: Yes. Justice Alito and the Supreme Court seem to have left the door just slightly cracked to entertain the claims in this case. And my sense was that the court — Justice Alito, Justice Kavanaugh and others — would only be inclined to do so if there was some sense that the interjection of their voice would change the outcome. But what we’re seeing is that that’s not the case. And what we’re seeing is that there is no evidence of fraud in the way that Pennsylvania or in the way in which any state carried out its elections. My organization, the Lawyers’ Committee for Civil Rights Under Law, runs a nationwide, nonpartisan election protection program. We have been following and observing the way that this election has been carried out from day one. And not a single instance — not one, not a single instance — of fraud has come forward.

And it’s remarkable, because what we have seen are documented instances of voter suppression, voters who could not access the one drop box per county in Pennsylvania. What we saw were voters who couldn’t vote because of lines that stretched for hours, particularly during the primary season in Philadelphia — and silence, deafening silence, from our federal government, from the Justice Department. So, this is, you know, again, theater, being used to delay the inevitable. The voters have spoken. And we know that we have President-elect Biden who has prevailed. And it really is time for these lawsuits to be put to rest.

JUAN GONZÁLEZ: And your reaction to the decision by Attorney General Barr, to his memo authorizing federal prosecutors to begin to pursue substantial investigations of voting and vote tabulation irregularities prior to the certification of elections? It caused Richard Pilger, the career official in charge of voter fraud, to resign — of investigating voter fraud. This is unprecedented, isn’t it, for an attorney general to act even before votes are fully tabulated?

KRISTEN CLARKE: It certainly is unprecedented. The Justice Department has long abided by cardinal rules of not taking action that could be perceived to be in favor of a particular political party or a particular candidate — or, here, a particular former candidate. And we have seen Attorney General Barr ignore these rules at every step of the way. Several weeks ago, he publicly announced an investigation into a handful of ballots in Pennsylvania, and it was clear that this intervention was designed to put his thumb on the scales in favor of President Trump, to breathe life into these false, baseless claims of widespread vote fraud. And this directive issued to prosecutors all across our country last night is breathtaking. It’s unprecedented and deeply troubling, because it’s intended to incite prosecutors, criminal prosecutors, across our country to now go on a fishing expedition, leading nowhere.

But what the impact will be is that it will cast doubt, sow confusion and chaos in our electoral process. We want a democracy that has good standing. There are people all across the globe who are watching this fiasco that’s playing out in these United States. And we are becoming the laughingstock for the world. And so, to have an attorney general, who should be neutral and independent and fair, kind of weighing in to this kind of chaotic strategy that’s underway by President Trump of using litigation to delay the inevitable, to suggest that the outcome is not right or fair, is deeply, deeply troubling.

At the end of the day, you know, we are weighing in on some of these cases, where we deem appropriate. When we look at the pattern, the kind of cherry-picked pattern where these suits are being filed, we’re finding that these suits are being filed in places that are home to large numbers of voters of color. And so, we are weighing in on these cases when appropriate, but we expect that they will all fail at the end of the day, and that —

KRISTEN CLARKE: — what we would have lost is time for a smooth transition.

AMY GOODMAN: We have to leave it there. I thank you for being with us, president and executive director of the Lawyers’ Committee for Civil Rights Under Law.

That does it for our show. I’m Amy Goodman, with Juan González. Be safe. Save lives. Wear a mask. 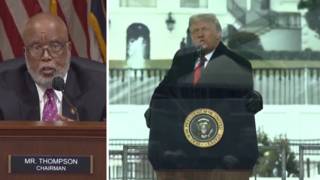