We speak with Democracy Now! co-host Juan González about the deaths of two leading figures he reported on: New York City Mayor David Dinkins and beloved Puerto Rican social leader Carlos “Taso” Zenón. “Most people forget [Dinkins] was a Democratic Socialist before democratic socialism was in vogue,” notes González. He also recalls how Dinkins backed the movement against apartheid in South Africa, ordering the city to divest its pension fund from companies doing business there, and brought Nelson Mandela to the city right after he was freed. González also recalls how Zenón was a longtime activist who for decades led the fight against the U.S. Navy’s occupation of the island of Vieques, his hometown, where the U.S. government tested weapons and held military training exercises.

AMY GOODMAN: And former New York City Mayor David Dinkins has died at the age of 93. Dinkins was elected New York’s 106th mayor in 1989, defeating Republican challenger Rudy Giuliani to become the only African American ever to hold the position. During his four years in office, Dinkins expanded the size of New York’s police force to record levels. He also backed the movement against apartheid in South Africa, ordering the city to divest its pension fund from companies doing business there.

And those are some of the headlines. This is Democracy Now!, democracynow.org, The Quarantine Report. I’m Amy Goodman in New York, joined by my co-host Juan González in New Brunswick, New Jersey. In New Jersey, as in so many other places around the country, COVID is exponentially spreading. Hi, Juan.

AMY GOODMAN: Well, before we move on with our first story, I just wanted to get comment from you on the last two obits we brought people in the headlines. I want to start with Mayor David Dinkins, a Howard graduate who became the first and only African American mayor of New York.

JUAN GONZÁLEZ: Yes, Amy. Well, as you know, I knew David Dinkins pretty well over the years, covered him during — before his administration and then afterward, as well. He was — what you could say about David Dinkins is he practiced an old style of politics in New York City, the politics of civility, which is rare in many political leaders. He was, of course, the first African American mayor, in the ’80s, where all the big cities of America suddenly had African American mayors — Tom Bradley in Los Angeles, Harold Washington in Chicago, Wilson Goode in Philadelphia. And Dinkins was the last of this group to come to office. He only served one term.

Most people forget that he was a Democratic Socialist before democratic socialism was in vogue. He was a member of Democratic Socialists of America. And he had a liberal brand of politics. But what a lot of people don’t realize also about David Dinkins is that he was a reluctant mayor. He never really wanted to be mayor of New York City, but he was thrust into that position by the Rainbow Coalition movement of the day. Jesse Jackson in 1988 had really won New York City through his Rainbow Coalition in his second quest for president, and it was that coalition that sort of propelled Dinkins into office.

I’ll never forget New Year’s Day of 1989. I flew to Puerto Rico to cover the inauguration of a new governor in Puerto Rico, and Dinkins and several other politicians were on the plane, the same plane, that day. He was the Manhattan borough president at the time. And at one point he comes up to me in the back of the plane — because he was up there in first class, I’m down in coach — and he sits next to me, and he says, “Well, you know, they want me to run for mayor, and I’m not sure if I’d want to do this, because I’d have to give up my seat as Manhattan borough president. And this is the job I always wanted, Manhattan borough president.” And he says to me, “What do you think I should do?” And I said, “Well, Mr. Dinkins, you know, I’m a journalist. I’m not involved in politics. But one thing I’ve learned is, if you’re going to accomplish any great thing in life, you have to be willing to sacrifice a lot. And so, that’s the only advice I can give you.” And about three weeks later, he decided he was going to throw his hat in, and he won.

But he only served one term. And I think the problem with David Dinkins is — he did a lot of good, and I think the most — you mentioned the battle against apartheid, but people forget he brought Nelson Mandela to New York City right after Mandela had been freed, gave him a ticker-tape parade and really associated New York with supporting the battle to end minority rule in South Africa.

But he was felled, in large part, by the Crown Heights riot, by the surge in crime and the crack cocaine epidemic, and by the refusal of the police department really to work for him. They did everything possible to undermine him. And as a result, he only served one term, with Rudy Giuliani coming in as mayor. And, of course, we all know who Rudy Giuliani is now. But back then, a lot of people considered Giuliani almost a mythic figure in big-city politics. And we’ve now seen, toward the end of Giuliani’s career, what he’s really like. So, David Dinkins is a refreshing — was a refreshing figure in New York City politics.

AMY GOODMAN: And in that battle against apartheid, he took on the nation’s banks in fighting to have the city divest of its like half a billion dollars’ worth of pension fund stock invested in companies that did business in South Africa, and passed a bill that allowed the city to rate banks on their opposition to apartheid.

JUAN GONZÁLEZ: Yes, yes. And New York’s decision to divest was a big blow and, really, I think, really propelled the divestment movement and really forced corporate America, in large extent, to turn more and more against the South African government.

AMY GOODMAN: And finally, another obit today. In Puerto Rico, the beloved social leader Carlos “Taso” Zenón died at the age of 84 last Friday, the longtime activist, who, among many other actions, fought against the U.S. Navy’s occupation and constant bombing of the island of Vieques. The significance of Zenón, Juan?

JUAN GONZÁLEZ: Yes. Well, Zenón was another major figure, certainly in the Puerto Rican community, not only in Puerto Rico, but in the United States. I met him for the first time in 1979 in Philadelphia because, it turns out, many of the Viequense fishermen who had been dislocated from their lands ended up migrating to the United States primarily in Philadelphia, so there was a large community of Puerto Ricans from Vieques in the Philadelphia-Camden area. And Zenón would go back there often to raise funds and support for the efforts of the fishermen to block the Navy blockades.

They actually interrupted over 30, 35 naval exercises with their boats repeatedly from 1978 through 1983. And this was way before Vieques was known as an international symbol of a battle against colonialism. And so, Zenón really was a mythic figure. And later on, years later, his sons and other members of his family would continue the fight, which eventually ended in forcing the U.S. Navy out of Vieques in the early 2000s. So, this was a battle that went on for 25, 30 years, and Zenón was a person who touched it off back in the late 1970s.

AMY GOODMAN: And for people who aren’t familiar with what the military did for decades, they bombed Vieques with napalm, with depleted uranium and many other toxic explosives. Well, Juan, thanks so much for explaining the significance of both losses today, as we remember not only Zenón, but the first African American mayor of New York, David Dinkins.

When we come back, with some 54 million Americans going hungry, the food lines — people in lines, cars in lines for miles — are seen across this country. Stay with us

AMY GOODMAN: “Can I Kick It” by A Tribe Called Quest. The song includes a famous shoutout to vote for David Dinkins, who died last night at his home in New York about a month after his wife, Joyce Dinkins, died. 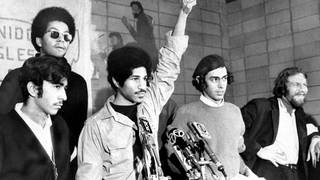