President Trump’s pardon of four former Blackwater contractors has sparked outrage in Iraq and in the United States. Nicholas Slatten, Paul Slough, Evan Liberty and Dustin Heard were convicted in the killing of 14 Iraqis in 2007, when contractors for the mercenary firm opened fire on civilians in Baghdad’s Nisoor Square. The four Blackwater guards were convicted in 2014 after years of painstaking work by investigators and prosecutors to address one of the most infamous chapters of the U.S. occupation of Iraq. Paul Dickinson, who was the lawyer for several victims of the Blackwater massacre, says Trump’s pardons are a fresh insult to Iraqis who lost loved ones and who were promised justice would be served. “Now, after the promises that we made to each one of these victims that we were going to hold people accountable for their criminal actions abroad, that has been taken away from them,” he says.

AMY GOODMAN: Last week, President Trump pardoned the four former Blackwater mercenaries involved in the 2007 Nisoor Square massacre, where 17 Iraqi civilians died. The pardoned men include Nicholas Slatten, who had been sentenced to life in prison after being convicted of first-degree murder for his role in the massacre. The other three Blackwater contractors were convicted of involuntary manslaughter and given sentences of 12 to 15 years.

The pardons have sparked outrage in Iraq and here in the United States. The father of 9-year-old victim Ali Kinani told the Middle East Eye, quote, “No one is above the law is what we learn in America, but now there’s someone above the law. I don’t know how this is allowed,” he said.

Blackwater was founded by Erik Prince, a close ally of President Trump. Prince’s sister, Betsy DeVos, serves as education secretary. Supporters of the Blackwater guards refer to the men as “the Biden Four.” In 2010, then-Vice President Joe Biden announced the Justice Department would appeal the dismissal of a criminal case against the Blackwater mercenaries involved in the Nisoor Square massacre. The men would later be tried and convicted.

For more, we’re joined by Paul Dickinson in Charlotte, North Carolina. He served as the lawyer for the family of Ali Kinani and five other victims of the Blackwater contractors who were convicted of killing at least 14 innocent Iraqi citizens in the attack. Dickinson’s recent piece for The Intercept is headlined “I Sued Blackwater for the Massacre of Iraqi Civilians. Trump Just Pardoned Those Convicted Killers.”

Paul Dickinson, welcome to Democracy Now! Can you respond to the pardon, and its significance?

PAUL DICKINSON: Good morning, Amy. Thank you for having me.

I will admit it’s been quite a while since I’ve listened to that gripping interview with Mohammed. I was sitting in the room when he gave that story and explained what happened that day. And sitting here listening to it again through my headset, I’m reminded of the horror that he and others faced that day.

My response to the pardon is that these four men were tried and convicted by the U.S. legal system, that there were difficulties with prosecution — as you mentioned, the indictment was dismissed on New Year’s Eve 2009. Joe Biden gave a press conference and said that we were going to pursue — U.S. government was going to pursue the prosecution. Each step of the way, Mohammed and others, including my other five clients, were promised by the U.S. Justice Department that we were going to hold those men accountable. And that’s what we did. Nicholas Slatten was tried with the other three. The court of appeals made a decision that he should have been tried separately. He was tried separately.

The important thing to note from this is not that there was some extraordinary effort to try these men or to make an example of them, but, however, that they were given fair trials; that the U.S. court system, the U.S. justice system, worked for these men and for their victims to ensure justice was given fairly, that they received fair trials; and now, after the promises that we made to each one of these victims that we were going to hold people accountable for their criminal actions abroad, that that has been taken away from them. And I cannot imagine the feelings that Mohammed and the others have for feeling that justice has been taken from them by the U.S. government, after it had been promised to them. We have gone back on our word to these victims, and that is sad and unfortunate.

AMY GOODMAN: In fact, Slatten was convicted of first-degree murder, actually, not for the killing of Ali Kinani — is that right? — but the 19-year-old medical student who was driving his mom.

AMY GOODMAN: And so, what at this point happens next? They’re just freed from prison?

PAUL DICKINSON: The president’s pardon power is absolute. Yes, they are freed from prison. As I recently tweeted about, the four men are given pardons, and the contract that Blackwater had with the Department of State provided the contractors who were working in Iraq and elsewhere under the contract complete immunity from both criminal and civil liability in Iraq, and that the only place that these men could have been charged criminally or held civilly accountable, which is what my lawsuit was about, was in the United States.

But even those steps provided us very difficult legal hurdles to get over to get them in the United States, get jurisdiction over them. We sued them in North Carolina. Case was removed to federal court, then sent back to state court. It was on the 4th Circuit Court of Appeals for a period of time before the case eventually resolved. The Justice Department faced similar difficulties in trying them in the United States. However, the courts of appeals determined that those cases were correct, and the federal court in North Carolina thought that our claim was correct, and state court in North Carolina.

AMY GOODMAN: We want to thank you, Paul Dickinson, for being with us, the lawyer for the family of Ali Kinani and five other victims of the Blackwater mercenaries who were involved with the murders of Iraqi citizens in 2007 in Nisoor Square, Baghdad. We will link to your piece in The Intercept, headlined “I Sued Blackwater for the Massacre of Iraqi Civilians. Trump Just Pardoned Those Convicted Killers: Trump’s pardon of the Blackwater mercenaries who murdered 14 Iraqi civilians at Nisour Square shows the world what justice means in the United States.”

This is Democracy Now! When we come back, we go to Nobel Prize-winning economist Joe Stiglitz. The House just voted to increase stimulus checks from $600 to $2,000. What happens in the Senate today is key. Stay with us.

AMY GOODMAN: “Adoro” by Mexican singer and songwriter Armando Manzanero. He died of COVID Monday at the age of 86. Mexico has the fourth-highest reported COVID death toll in the world. 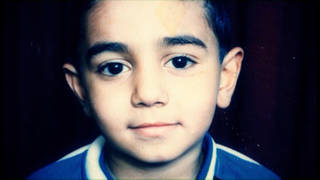