Billionaire Democratic presidential candidate Mike Bloomberg is rising in the polls in the wake of the Iowa caucuses and New Hampshire primary. Democracy Now! co-host Juan González speaks with us about Bloomberg’s approach to campaign spending, the administration’s policies during his three terms as mayor of New York City and the scores of lawsuits filed against Bloomberg and his company. “It’s amazing to me that Michael Bloomberg is getting as much attention as he is,” González says.

AMY GOODMAN: Juan, before we begin our first story, the rise of Bloomberg in the polls to be the next president of the United States. You have long covered him, through his three terms, from stop-and-frisk to this issue now of redlining.

JUAN GONZÁLEZ: Well, it’s amazing to me that Michael Bloomberg has been getting as much attention as he has by the media. But remember this: The media, the commercial media, directly profit from Bloomberg’s rise, because they’re going to be collecting all of the ad revenues that he is putting out across television nationwide. So there is an actual economic interest in continuing to see Bloomberg’s rise in the poll on the part of many of the commercial media.

But I think one thing that strikes me the most, Amy, is that I don’t think any person in American history has ever spent more money cultivating an image in the public of himself as has Michael Bloomberg, because when he ran for mayor three times in New York City, he spent $267 million just running for mayor. I think his last race he spent $108 million, while his opponent, the Democrat Billy Thompson, spent about $9 million. It was 11 times more. During that race, there were an average of 42 commercials a day on New York television throughout the race, Bloomberg commercials. But it wasn’t just the direct contributions. He also, through his foundation, was spending about $100 million a year in donations to nonprofits, much of it to New York City nonprofits, that was cultivating this — sort all these civic organizations that all were getting these huge checks named “anonymous,” that they knew were from Michael Bloomberg. So, the amount of money that this man spent just when he was for mayor of New York, now of course at the level of the national level, is unprecedented in terms of buying an image in the public.

What he never talks about, though, is, he has apologized for his stop-and-frisk policies, but if you look deeper into what happened during that period of time, not only did Bloomberg systematically defend stop-and-frisk for all those years, but his people attempted to smear the judge, the federal judge, Scheindlin, who was on the case, and convinced all of the media, behind the scenes, to write articles that she was biased and that she was unhinged. So, while Trump —

AMY GOODMAN: And to be clear, Judge Scheindlin was the judge who ruled that the stop-and-frisk policy was unconstitutional.

JUAN GONZÁLEZ: Was unconstitutional. And as the Bloomberg administration saw that she was about to rule, they started a clear campaign, quietly. Unlike Trump, who tweets against judges, they tried to convince all the newspapers of the city to write damaging editorials and exposés of the judge as a means to get her removed from the case.

And the other policies of Bloomberg, whether it’s the privatization of the public parks in the city, the massive privatization of public schools through expansion of charter schools, massive subsidies for commercial development in the city while rents skyrocketed, this is classic neoliberalism. And the idea that Democrats and some progressives might actually rally behind him, I find astonishing.

JUAN GONZÁLEZ: Yeah, well, there’s been many historians, urban historians, who have documented that the real wealth gap in America between African Americans, Latinos and the rest of the country is as a result of the systematic discrimination in lending policies for homes, that went on for decades. For decades. And the idea that suddenly trying to provide fair underwriting policies for the African-American and Latino community caused the financial meltdown is really only a viewpoint of the extreme right even of the Republican Party.

AMY GOODMAN: Finally, these scores of lawsuits against Bloomberg and his company around issues of sexual harassment. It was very interesting, on The View, the ABC TV show, when Bloomberg went on it in — I think, just recently, in January, when he was asked about this, he commented that it was — his company was just guilty of fostering bawdy humor, and said he would not take any steps to release women who signed confidentiality agreements, NDA agreements, with his company to speak publicly.

JUAN GONZÁLEZ: Well, that’s especially important these days, given the fact of the — in the #MeToo movement — how many of these companies imposed these nondisclosure agreements as a way to keep their actions hidden from the public view. And I would think that if he’s a candidate for president, he should definitely lift those nondisclosure agreements so we can find out exactly what was going on in his company.

AMY GOODMAN: Well, of course, we’ll continue to cover not only Mayor Bloomberg, but all of the presidential candidates, as this 2020 election season heats up. 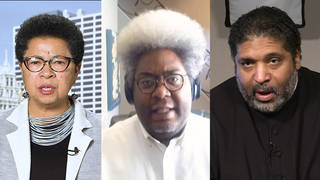