In Yemen, 31 people were killed in U.S.-backed Saudi airstrikes over the weekend, including women and children. The strikes in the northern al-Jawf province came just hours after the Houthis said they had shot down a Saudi fighter jet in the same area. The United Nations called the drone strike “shocking.” The deadly strike follows a recent uptick in violence in northern Yemen and comes as the war there hits a five-year mark. More than 100,000 have died, and far more have been displaced, since the conflict began in 2015. On Sunday, the United Nations said the Houthis and U.S.-backed Saudi and United Arab Emirates coalition had agreed to a major prisoner swap, the first of its kind in the long-running war. We speak with Shireen Al-Adeimi, a Yemeni scholar, activist, and an assistant professor at Michigan State University.

AMY GOODMAN: This is Democracy Now! I’m Amy Goodman, as we look now at Yemen, where 31 people were killed in U.S.-backed Saudi-UAE airstrikes over the weekend, including women and children. The strikes in the northern al-Jawf province came just hours after the Houthis said they had shot down a Saudi fighter jet in the same area. The United Nations called the drone strike “shocking.” This is an unidentified Yemeni man speaking to reporters after the strike.

YEMENI MAN: [translated] So we are here. This is one of the cars that were targeted by the Saudi-American air force last night. And they also targeted villages in Malaha area and residential areas, causing tens of martyrs and injuries. And this is a civilian’s car.

AMY GOODMAN: The deadly strike follows a recent uptick in violence in northern Yemen, comes as the war there hits a five-year mark. More than 100,000 have died, far more have been displaced, since the conflict began in 2015. On Sunday, the United Nations said the Houthis and U.S.-backed Saudi and UAE coalition had agreed to a major prisoner swap, the first of its kind in the long-running war.

Professor Al-Adeimi, welcome back to Democracy Now! Can you talk about exactly what happened this weekend?

SHIREEN AL-ADEIMI: Well, this weekend, Amy, was one of another airstrike, unfortunately, that was targeting civilians in Yemen. This happened, as you mentioned earlier, right after the Houthis had downed a Saudi jet, which is very uncommon in Yemen, given that they don’t have as many capabilities as the Saudi-led coalition does. But there were — reports say that there were some children gathered around that area, you know, around the wreckage, and then there was a strike that targeted those children and some neighboring houses. And so, it’s not unusual for the Saudi-led coalition to strike civilians. We just haven’t heard about, you know, a massacre, really, of 31 individuals in a while, although it’s certainly been common over the last five years.

AMY GOODMAN: And can you talk about the U.S. role in what’s going on right now, and how dire the situation — I mean, I think the U.N. has called it the most dire situation in the world — the situation is now in Yemen?

SHIREEN AL-ADEIMI: There is no crisis on Earth that’s worse than Yemen, according to the U.N. Over 80% of the population is barely able to survive. Many people have already been facing famine and have died of starvation, and diseases like cholera and dengue fever are rampant in Yemen, because — not just because of the airstrikes, of course, that have disabled the Yemeni healthcare system and other systems, but also the blockade that the Saudis and the UAE is enforcing.

The United States has been a partner to the Saudis ever since President Obama’s administration. And they’ve not relented. You know, they’ve continued to support them through hundreds of billions of dollars in weapon sales, but also targeting assistance. And up until November of 2018, they were providing midair refueling. They’re still providing intelligence and updating vehicles and aircraft and training pilots. And so, the U.S. is involved every step of the way. We know that this is unconstitutional. Congress has passed a resolution saying that this is unconstitutional. Yet President Trump’s administration continues to provide extensive support to the Saudis and Emiratis, without which this war will just not be able to continue to the same scale.

SHIREEN AL-ADEIMI: Well, it took a number of years to do this. There was a lot of resistance before. But under the leadership of Senator Sanders in the Senate and Ro Khanna in the House, they were able to pass the War Powers Resolution, which is — you know, invokes the War Powers Act of 1973, that authorizes Congress, and not the president, to go to war. And so, they’ve declared that this is an unconstitutional war. It violates our own laws here. Of course, it causes massive casualties in Yemen, the worst that we’ve seen in recent history. But more importantly, according to Congress, they have been trying to stop this through legislation.

And unfortunately, President Trump has vetoed this bill. And so, you know, there are constant roadblocks. Most recently, they tried to amend the National Defense Authorization Act of 2020 to include certain provisions that would prevent the U.S. from providing targeting assistance and any kind of — allocating any kind of budget toward helping the Saudis and Emiratis in their war on Yemen. And unfortunately, that was dropped at the last minute, as well. And, you know, there have been efforts, but it’s been very difficult to try to get attention, to get to — to try to get sustained effort in this regard. And the reality is that every single day Yemenis are dying, and they’re dying in massive numbers. The numbers that we know now are horrifying, but they don’t even speak to the full extent of the losses that we’re seeing in Yemen.

SEN. BERNIE SANDERS: According to the United Nations, the war in Yemen could lead to the most severe famine in more than 100 years, with some 100 million people at risk of starvation in one of the poorest countries on Earth. As a result of this war, according to the aid organization Save the Children, some 85,000 children in Yemen have already died of starvation. And millions more face death, if this horrible war continues.

AMY GOODMAN: So, what has come of this, Shireen Al-Adeimi?

SHIREEN AL-ADEIMI: You know, there’s just been so much resistance. Once Trump vetoed the bill, we needed a two-thirds majority to overturn the veto, which we’ve not been able to achieve. There has been Republican support and almost a full, unanimous Democratic support now, but it’s going to take a lot more. And at this point, you know, supporting candidates like Bernie Sanders, who have been committed to ending this war, is really important. Millions and millions and millions of Yemeni lives are at stake here. And so, it’s really important to continue to come at this from various angles, because the work can’t stop because of the veto, but it has made things very, very difficult. But the War Powers Act is one of those acts that can be invoked over and over by any member of Congress. And so, we have that to continue to pursue this.

AMY GOODMAN: Now, the relationship between the Trump family and Mohammed bin Salman, the leader of Yemen [sic], is — the leader of Saudi Arabia, is very well known, at the heart of the U.S.-Saudi relationship. Can you talk about how that affects what the U.S. does? You know, Jared Kushner, with others, and Wall Street leaders were at the so-called Davos in the Desert in Saudi Arabia meeting with Mohammed bin Salman. And this is after all the information had come out, of course, around the dismemberment, the murder of The Washington Post columnist Khashoggi. The Guardian wrote a piece saying that House Democrats detailed how top Trump administration officials, including Michael Flynn and Jared Kushner, pushed to provide the Saudi government with technology to build nuclear power plants. That could put Saudi Arabia on the path to developing nuclear weapons and further destabilize the Middle East. Is this a concern of yours?

SHIREEN AL-ADEIMI: Absolutely, and I think it should be a concern for everyone. The Saudi regime has shown to be completely impulsive. And Mohammed bin Salman, in particular, has driven an entire country to the brink of starvation. He is killing and starving Yemenis in the millions, and we continue to support him. He prosecutes and persecutes members of his own country who show any kind of dissidence to him, and we continue to support him. And so, I don’t think that this is a man who needs to be having access to more technology that would cause even more death and destruction.

The Trump Administration has been very clear about why they support Mohammed bin Salman. A number of times, Trump has said that the Saudis pay in cash. And so, we’ve elected a businessman to the White House, and he is operating in a very businessman-like strategy, where he is mostly concerned about how much money this is going to make the United States, at the expense of not only, of course, international law and morality and humanitarian considerations, but also our own legal code and our own Constitution. So, nothing will get in the way of making money through the Saudis, and Mohammed bin Salman has been a very happy participant, you know, with the Trump administration in power.

AMY GOODMAN: Well, Shireen Al-Adeimi, I want to thank you for being with us, Yemeni scholar, activist, assistant professor at Michigan State University, speaking to us from Lansing.

Democracy Now! is now currently accepting applications for a development manager position, as well as our news production fellowship, both here in New York City. To get more information and to apply, go to democracynow.org.

Very Happy Birthday to Neil Shibata and to Brendan Allen! I’m Amy Goodman. Thanks so much for joining us. 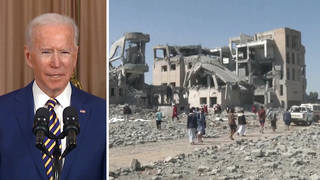