As the Democratic presidential hopefuls prepare to take to the debate stage tonight, we turn to a central issue of the campaign: Medicare for All. In a new study, Yale scholars have found that Medicare for All will save Americans more than $450 billion and prevent 68,000 deaths every year. The study in The Lancet — one of the oldest and most prestigious peer-reviewed medical journals — found that Medicare for All, supported by Bernie Sanders and Elizabeth Warren, will save money and is more cost-effective than “Medicare for All Who Want It, “a model supported by Pete Buttigieg. Sanders referenced the study at a campaign rally in Carson City, Nevada. For more, we go to New Haven, Connecticut, where we’re joined by Alison Galvani, director of the Center for Infectious Disease Modeling and Analysis at Yale’s School of Public Health. She is the lead author of the new Lancet study, “Improving the prognosis of health care in the USA.”

StoryOct 16, 2019Dem Debate: “Disingenuous” Attacks on Medicare for All Distract from Cost of Today’s Broken System

JUAN GONZÁLEZ: Well, as the Democratic presidential hopefuls prepare to take to the debate stage tonight, we turn to a central issue of the campaign: Medicare for All. In a new study, Yale scholars have found that Medicare for All will save Americans more than $450 billion and prevent 68,000 deaths every year. The study in The Lancet, one of the oldest and most prestigious peer-reviewed medical journals, found that Medicare for All, supported by Bernie Sanders and Elizabeth Warren, will save money and is more cost-effective than “Medicare for All Who Want It,” a model supported by Pete Buttigieg. Sanders referenced the study at a campaign rally in Carson City, Nevada.

SEN. BERNIE SANDERS: A study was published by a group of epidemiologists from Yale University on Medicare for All. This is not Bernie Sanders; this is Yale scholars publishing in a prestigious medical journal. This is what they said in that article, and I quote: “Taking into account both the costs of coverage expansion” — in other words, under Medicare for All, more people are starting, going to get the healthcare they need — “and the savings that would be achieved through the Medicare for All Act, we calculate that a single-payer, universal health-care system is likely to lead to a 13% savings in national health-care expenditure, equivalent to more than $450 billion annually.” …

In other words, if we end the profiteering of the insurance companies and the drug companies — and they made $100 billion in profits last year — if we end the absurdity of having thousands of different healthcare plans and the hundreds of billions it takes to administer these thousands of plans. All of you have had the experience of getting on the phone, arguing with some insurance company. You thought you were covered, and they’re telling you — you’re paying for the other guy at the end of the line who’s telling you you’re not covered, when you paid for it and you thought you were covered. We can save $500 billion a year by ending the administrative nightmare that currently exists in healthcare.

AMY GOODMAN: That was presidential candidate Bernie Sanders. For more, we go to New Haven, Connecticut, where we’re joined by Alison Galvani, director of the Center for Infectious Disease Modeling and Analysis at Yale’s School of Public Health. She’s the lead author of the new medical journal Lancet study called “Improving the prognosis of health care in the USA.”

Thanks so much for being with us, Alison. If you could start off by responding to the way in this country — we certainly see it in all of the debates, what the moderators ask. Is Medicare for All going to increase taxes, as opposed to the overall cost of healthcare? Lay out what you found.

ALISON GALVANI: Well, on the one hand, Medicare for All will increase taxes for households and employers. I think the important point is that, overall, it will reduce costs for both the taxpayer households as well as the employer, because it will eliminate the even higher costs of healthcare premiums paid by individuals and employers. It will also eliminate pharmaceutical prices, deductibles, copays and all these other fees.

JUAN GONZÁLEZ: And in terms of Joe Biden, Vice President Joe Biden has said repeatedly that Medicare for All would cost more than the entire federal budget. Could you respond to that?

ALISON GALVANI: Well, we found that Medicare for All would save over $450 billion compared to what the country is paying now. So, right now the U.S. is paying more than any other country for healthcare, yet we don’t even rank in the top 34, some key public health measures, including infant mortality and overall life expectancy. And at the same time, there’s over 80 million people without adequate health insurance, so either without any health insurance or without health insurance that they can afford.

And the Medicare for All Act identifies a number of ways in which it’s going to save the country money. So, firstly, what people pay right now for hospital services doesn’t correlate with their outcomes, their clinical outcomes, and it varies widely. So, by applying Medicare rates to the entire country, that will save us $100 billion right there. Another important point is that Medicare for All will minimize paperwork and will streamline administration and billing. So, currently, Medicare has an overhead of 2.2%, whereas private insurance, it’s over 12%. So, applying Medicare overhead to the entire country will save us $200 billion.

ALISON GALVANI: Medicare for All will also — oh, sorry, go ahead.

AMY GOODMAN: I wanted to go to Democratic presidential hopeful Pete Buttigieg speaking during the New Hampshire debate earlier this month. He said he supports “Medicare for All Who Want It.”

PETE BUTTIGIEG: There is now a majority ready to act to make sure there is no such thing as an uninsured American and no such thing as an unaffordable prescription, just so long as we don’t command people to accept a public plan if they don’t want to. That’s the idea of Medicare for All Who Want It. My point is, what I am offering is campaigning for all of these things that America wants.

AMY GOODMAN: So, that’s Pete Buttigieg. Can you tell us what you found, if you understand what he means, Medicare for All Who Want It, and what that would cost?

JUAN GONZÁLEZ: And could you talk about your projection that about 68,000 unnecessary deaths per year would be avoided by going to Medicare for All? How did you get that calculation?

AMY GOODMAN: And what do you say to the candidates who say, you know, “You’re hurting people who have healthcare, when you switch them to Medicare for All”? But, of course, you’re helping people who are not insured, who would then be overall insured.

ALISON GALVANI: Well, the premise of the first part of that statement, I think, is a pervasive misconception. We would — people would have more choice. Everyone would have more choice, because with Medicare for All, there would be no distinction between out-of-network and in-network barriers. So, not only would you be able to keep your doctor; if there was a different doctor you preferred, you would be able to switch.

AMY GOODMAN: And what, Alison, surprised you most about this study that you did? What didn’t you expect to find?

JUAN GONZÁLEZ: And, of course, there are critics who say of Bernie Sanders’, Elizabeth Warren’s Medicare for All proposal that this is not possible in America, that this isn’t Denmark or Sweden. What’s your response to that?

ALISON GALVANI: I think it’s absolutely possible. In fact, a Medicare system gives us a real-world test of viability. It succeeded for 54 years, so more than half a century. It has high popularity, bipartisan popularity. And if Medicare can succeed in the age cohort that is the elderly, 65 and above, who access healthcare most often, if it can succeed in that age cohort, it is all the more feasible and cost-effective to be offered to everyone.

AMY GOODMAN: And what about the fact that most people in this country do not realize we are so alone in the industrialized world when it comes to providing healthcare for our population?

AMY GOODMAN: How have the campaigns responded to what you have to say? Certainly, Senator Sanders has repeatedly talked about this study. How has, for example, the Biden campaign and others?

JUAN GONZÁLEZ: And also, you’ve taken the step of making publicly available your calculations, so that others who want to question or delve deeper into your analysis — where is that available?

ALISON GALVANI: That’s available — so, our tool is called Shift. And as you said, it’s an open-access, freely available tool, in which users can adjust the parameters and tailor a financing plan. And that’s available at shift.cidma.us — which is the Center for Infectious Disease Modeling and Analysis. So I encourage members of the public, Congress, presidential candidates even, to try it out. You can adjust your assumptions. If there’s a particular assumption you think is too optimistic, you’re welcome to adjust it and see how you would finance it. There’s —

AMY GOODMAN: And finally, Alison Galvani, if you can talk about being in academia? You’re there at the Yale School for Public Health. The amount of money that goes into studies from the drug, the pharmaceutical, the insurance industry, that skews what’s looked at and what the results are? I mean, your study here is extremely significant and unusual.

ALISON GALVANI: Well, I’m not familiar with how much they’re spending on studies to counter this. I do know, and it’s publicly available, that lobbying and campaign financing is — well, it dwarfs the rest of the industry. So, pharmaceutical companies are spending more than any other industry. And the second most is insurance companies. So, fossil fuels, for instance, or banking, they’re tiny fractions of how much are spent by those two industries.

AMY GOODMAN: Alison Galvani, we want to thank you so much for being with us, director of the Center for Infectious Disease Modeling and Analysis at Yale’s School of Public Health. We will link to your Lancet study, titled “Improving the prognosis of health care in the USA.”

This is Democracy Now! When we come back, the Latinx group Mijente endorses a candidate for the first time in its history. Stay with us. 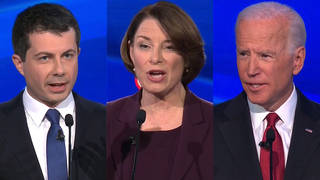 Dem Debate: “Disingenuous” Attacks on Medicare for All Distract from Cost of Today’s Broken System