Months ago, the streets of Santiago and other Chilean cities were alive with a vibrant mass protest movement that drew hundreds of thousands and even led the U.N. climate summit to be relocated to Madrid, Spain, last December. Now the public spaces of Santiago are largely empty as citizens shelter in place to prevent the spread of COVID-19. But the protest movement against austerity and right-wing President Sebastián Piñera lives on as activists find new ways to organize online. We go to Santiago, Chile, to speak with Angela Valenzuela, a 350.org organizer who has been active both in the country’s uprising and in the global youth climate strikes and is a former coordinator with Fridays for Future Chile.

StoryApr 22, 2020Greta Thunberg: Climate Activists Have Not Lost Hope Amid Pandemic. We’re Changing How We Organize.

AMY GOODMAN: This is Democracy Now! I’m Amy Goodman, with Juan González, as we end today’s show in Chile, where nearly 150 people have died from the coronavirus, with almost 11,000 confirmed cases. Mere months ago, the streets of Santiago and other Chilean cities were alive with a vibrant mass protest movement that drew hundreds of thousands and even led the U.N. climate summit to be relocated to Madrid, Spain, last December. Now the public spaces of Santiago are largely empty as citizens shelter in place to prevent the spread of COVID-19. But the protest movement against austerity and the right-wing President Sebastián Piñera lives on as activists find new ways to organize online.

For more, we’re going to Santiago, Chile, to speak with Angela Valenzuela. She has been active both in Chile’s uprising and in the global youth climate strikes, which have also moved online. She’s a climate activist, 350.org organizer, former coordinator with Fridays for Future Chile, and also a singer and songwriter.

Angela, we first spoke with you in Madrid at the U.N. climate summit. Welcome back to Democracy Now! Can you talk about the climate movement, on this 50th anniversary of Earth Day, in the midst of the pandemic in Chile?

ANGELA VALENZUELA: Well, thank you so much for having me. It’s really an honor to be here.

Yeah, so, well, we are adapting to this newest scenario, using online tools and online organizing that we were already working on, but now really moving into this world of creating awareness, with a spark of hope, and using a lot of arts to convey our message, so people can feel empowered still, facing the COVID crisis and the climate crisis. And I think it’s a very interesting moment where we can learn from what it means to confront a crisis like a crisis. Like we are working with this campaign of fighting a crisis like a crisis. And I think the rapid response from many governments of, like, locking down and shutting down entire countries really shows what type of leadership needs to be done in terms of the climate crisis.

JUAN GONZÁLEZ: And, Angela Valenzuela, I wanted to ask you — even before Sebastián Piñera came to power, way back to the period of Pinochet, Chile became an example of privatization, of neoliberal policies in Latin America, of the pension systems, of health and other. How has that affected — this history of privatization, how has that affected the ability of the country to deal with the coronavirus now?

ANGELA VALENZUELA: Well, what it’s really showing and demonstrating is that this system of extreme neoliberal policies and economic system, it’s failing to protect people when a crisis like COVID-19 shows up unexpected, without any expectation. It’s as serious as people don’t have access to water to wash their hands. Like 1.5 million people in Chile don’t have proper access to water. Then, the healthcare system already collapses every winter, without COVID-19. So, we are very soon going to collapse the whole system of healthcare. People won’t be able to have access to even ventilators. Like, we are 18 million people, for example, and we only have 1,500 ventilators. And already, most of them are used. We only have 500 available.

ANGELA VALENZUELA: Well, everything is happening online. And not only climate protesters, but protesters in general, all strikers and the Chilean movement, is saying that, you know, another way to fight is to stay home and to take care of each other, strengthen our networks through online organizing, and to have memory of what has happened in Chile in terms of the environment and, as well, with the human rights violations. We will not forget the people who have been murdered. We won’t forget how we have sacrifice zones and how, like, even pollution in our cities are also making us more vulnerable to the COVID crisis.

So, once we go back to the streets, and this crisis, this health crisis, basically stops, or we stop the — we go out again, we will go stronger. And I think this is a very important moment to reflect on this system that is not working, and also to push forward for the change that is needed.

JUAN GONZÁLEZ: And, Angela, I’m wondering if you could comment on — there’s been this proposal by the Chilean government to possibly issue immunity cards to those Chilean citizens who have already recovered from the virus. What could be the possible effects of that, especially since it’s not really even proven conclusively yet that immunity is established once you have recovered from the virus?

ANGELA VALENZUELA: Well, it’s a very irresponsible measure. As you said, it’s not proven that you can get immune after you recover from the virus. Indeed, in South Korea, more than 140 people that were recovered already got the COVID-19 again as a second time. So I think it’s just irresponsible.

And also, it shows this attitude that the government has of overconfidence. For example, we have more than 10,000 cases already, and the plans that were announced last Sunday is that slowly we will go back to a new normality, which means that public workers this week had to go back to work, which means that, since May, classes — like, students will have to go back to classes slowly, which will put their lives at risk, basically. So, this sense, like, it feels like the decision-making — actually, the decision-making is not putting people’s well-being at the center, but basically trying not to commit the well-being of the economy. And this is really problematic.

AMY GOODMAN: Angela, President Piñera recently sparked outrage for posing in the main plaza in Santiago, where for months was the center of the raging anti-inequality protests that were taking place. The plaza has remained empty since the coronavirus has forced the country to shut down. Your response, the symbolism of what he was doing, and your final comment?

ANGELA VALENZUELA: Well, when he — that action of taking that picture with this heroic posture, it was really outrageous, first of all, and also violent, because, as you said, this square used to be called Plaza Italia, but during the uprising we renamed this space as Plaza Dignidad, which is Dignity Square. And it’s been a very symbolic point. People have died there fighting, like, because of police brutality. And people have lost their sight because of being shot at — very clear — at their eyes, with rubber bullets. So, when you see him, when he takes advantage of people being in quarantine and not allowed to go out, and he goes there, it’s like —

ANGELA VALENZUELA: OK. It’s just showing his lack of empathy to this whole social process that we are leading.

AMY GOODMAN: Angela Valenzuela, we want to thank you so much for being with us, climate activist, 350.org organizer, former coordinator with Fridays for Future Chile, as we wrap up our 50th anniversary of Earth Day special in the midst of this raging pandemic.

Democracy Now! is working with as few people as possible, the majority of our team working from home. I’m Amy Goodman, with Juan González. Be safe. 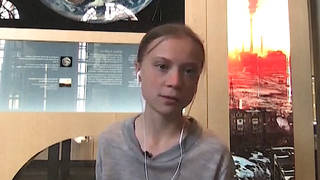