“Nobody Wants to Do This”: Georgia Reopens Nonessential Businesses Despite Public Health Warnings

We go to Georgia, which is reopening nonessential businesses today — hair and nail salons, tattoo parlors and massage therapists — despite a rising number of COVID-19 deaths. The governor is opening the state over the objections of mayors in Savannah, Atlanta and Augusta. “This order has nothing to do with public health. It has everything to do with the financial health of the state,” says George Chidi, columnist for Decaturish, and public policy director for PadSplit, an Atlanta-based affordable housing organization.

StoryJan 19, 2021U.S. Rep. Tlaib: “Israel Is a Racist State That Would Deny Palestinians Like My Grandmother a Vaccine”

AMY GOODMAN: This is Democracy Now!, democracynow.org, The War and Peace Report, as we turn right now to Georgia. That’s right, Georgia. Georgia is opening up for business today. It’s reopening nonessential businesses despite a rising number of COVID-19-related deaths in the state and the objections of the mayors of Savannah, Atlanta, Augusta and many more. As Georgia’s death toll passes 900, the number of confirmed coronavirus cases hits 22,000. Governor Brian Kemp, who beat Stacey [Abrams] in the election, has ordered hair salons, tattoo shops, nail parlors, gyms, barbershops, bowling alleys to reopen. Restaurants and movie theaters are set to reopen Monday. Public health officials warn lifting strict social distancing measures will lead to more deaths. This is Governor Kemp speaking earlier this week.

GOV. BRIAN KEMP: When we have more people moving around, we’re probably going to have — see our cases continue to go up. But we’re a lot better prepared for that now than we were over a month ago. We have the hospital bed capacity.

AMY GOODMAN: The Associated Press reports President Trump and Vice President Pence told Governor Kemp on Tuesday they approved of his aggressive plan to reopen businesses — just one day before Trump reversed course and publicly said he opposed the plan.

On Thursday, the Southern Christian Leadership Conference issued a strong warning to the governors of Georgia, Texas and other states who are considering reopening their economies. SCLC President Dr. Charles Steele Jr. said in a statement, “We cannot use poor people as sacrificial lambs like they did to people during the Tuskegee Experiment. The businesses that are being reopened are the ones where poor people have to work and put their lives at risk.”

Well, for more, we’re going to Pine Lake, Georgia, where we’re joined by George Chidi. He is a public policy director for PadSplit, an Atlanta-based affordable housing organization, former city councilperson for Pine Lake, former reporter for The Atlanta Journal-Constitution.

George, thanks so much for joining us. Can you explain what is happening? If you were going to make a list of the businesses that should not be open right now, I mean, if you asked the public health officials all over this country, including Georgia, I dare say they would make the list of the nonessential businesses that the governor is opening today in Georgia. Why is this happening? Please explain.

GEORGE CHIDI: So, my sense of it is that it doesn’t really have to do with public health at all, because I can’t imagine somebody really needs a mani-pedi right now. And let me preface this by saying that even though massage parlors and bowling alleys are supposed to be able to be open, nobody’s going. There’s widespread skepticism here in Georgia about doing any of this.

I think that this is about reducing the potential unemployment insurance costs to the state. The order to open these businesses supersedes an order that he made to close these specific businesses a few weeks ago. But earlier this week, we started to see projections about what the budget shortfall is going to look like in Georgia. We’re looking at $4 billion that we weren’t going to have before. And the unemployment fund has about $2.6 billion in it. That’s going to be a crisis in about a year. And I think the governor is trying to act now to avert that crisis later.

AMY GOODMAN: But explain what the connection is. Are you saying that if he says you can go back to work, then those people who work in these places can’t file for unemployment; they can’t say, “No, I just decided to stay home,” once he said they can go back to work?

If your restaurant reopens — and some restaurants are going to reopen — and they call back their employees and say, “Hey, we need you to be a server,” but the employees don’t believe that they’ve got enough personal protective equipment or whatever, like, or they just believe that they’re going to be sick, well, they’ll file for unemployment, but then they’ve got to make the case for their unemployment before the Department of Labor. It’s not a slam dunk. If the business is closed, of course they’re going to get unemployment insurance. But if the business is open, well, according to the Department of Labor’s standards right now, fear of infection alone is not a sufficient cause for unemployment coverage.

Basically, it’s setting people up for a fight that might take two weeks, three weeks, four weeks, longer, and, frankly, some people are going to give up. And I think that’s what they want. They want people to give up their attempt to get unemployment, find a job that might be substandard relative to their skills, and keep from hitting the public dime.

AMY GOODMAN: So, can you give us a breakdown, George Chidi, of the people who work in these businesses, an economic and racial demographic breakdown?

AMY GOODMAN: How do you do that without touching people? And, of course, people can wear gloves, but you have to be so close. When we talk about arm’s length, that is far less than six feet.

GEORGE CHIDI: So, the nail technicians, like, there are health and safety guidelines that have been released. And like, it essentially turns a nail technician into a licensed practical nurse. There’s no way they’re going to be — everybody gets a mask. Everybody needs a new mask for each new person. Basically, everything —

AMY GOODMAN: That’s more than doctors and nurses get in this country right now.

GEORGE CHIDI: Right, right. There’s no way they’re going to be able to get their hands on that kind of equipment, that everything’s got to be covered in plastic and then re-covered after every person comes through the nail salon, temperature checks for everybody who walks through the door. It’s absurd. Like, nobody’s actually going to be able to open under —

AMY GOODMAN: So, can you talk about the governor’s relationship — he’s a close ally of President Trump. AP is reporting that both Trump and Pence told Kemp that this is a good idea, and then reversed course after enormous pressure from the top government scientists on President Trump, and now are saying that Kemp is making the wrong decision. Is it possible Kemp will go back, since you haven’t even hit the peak in Georgia right now? The deaths are vastly increasing each day.

GEORGE CHIDI: So, people are arguing that we peaked a week or two ago. I don’t believe that that’s true. Like, our numbers are increasing, and they’re — you know, like, that slope doesn’t look like it’s anything like a decline yet. Trump’s going to Trump. I mean, it’s about — Trump is about what is good for Trump. And honestly, I think he put his finger in the wind. There is massive skepticism of the governor in Georgia right now. Nobody wants to do this. There’s no upswelling of desire to go bowling right now. And frankly, I think he got feedback from the ground and said, “It’s better for me, Trump, to throw Kemp under the bus, so that I don’t look dumb.” Shock.

AMY GOODMAN: So, can you talk about the scheduled protest that was called off to reopen the state, because the governor said, “Don’t worry, I am reopening the state”? You have spent much of your time, George Chidi, following the “alt-right” in Georgia. Talk about the people who make up this pressure group and how powerful they are.

GEORGE CHIDI: So, there are a bunch of yahoos who are — we have a problem with the “alt-right” in Georgia. Let’s start with that. We had a terrorist cell of “alt-right” terrorists arrested about two months or so ago, just about an hour west of Atlanta. They were planning to attempt to assassinate people who were aligned with the antifa movement.

It’s astroturf, though, mostly. This isn’t — the protest movement here in Georgia was being pushed primarily by political groups that have an agenda. And those political groups weren’t — you know, when Trump started to come out and say, “Oh, yeah, no, this isn’t a good idea,” they — like, I could see the pullback happening.

Some of the protest groups — some of the folks who were protesting were anti-vaxxers in Georgia. Like, one of the main protest leaders is an anti-vax person. But the rest were “Three Percent” militia people. And they’re a real problem.

AMY GOODMAN: Very quickly, the CDC, the Centers for Disease Control and Prevention, is headquartered in Georgia, right? In Atlanta.

GEORGE CHIDI: We know better. Just this — whatever you’re seeing from our governor, the people of Georgia know better than this. Like, we’re staying home. Like, we’re not just social distancing; we’re shaming other people who aren’t social distancing. This order is — has nothing to do with public health. It has everything to do with the financial health of the state. And I’m sensitive to that. Like, we’re going to have a real problem in about a year. But I think it’s important right now to deal with the health crisis that we’re looking at right now.

AMY GOODMAN: George Chidi, I want to thank you for being with us, public policy director for PadSplit, an Atlanta-based affordable housing organization, former city councilperson for Pine Lake, former reporter for The —

GEORGE CHIDI: And a columnist for Decaturish. There you go. Thank you.

AMY GOODMAN: And a columnist for Decaturish. Thank you so much.

This is Democracy Now! When we come back, it’s been described as an “open-air prison.” So what does it mean when COVID makes its way there? We’re talking about Gaza. Stay with us.

“We Don’t Have the Capacity to Treat”: Palestinian-Canadian Doctor Says Israel Must Lift Gaza Siege 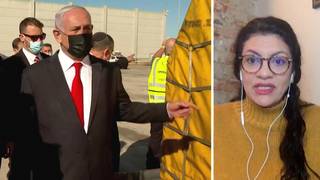 U.S. Rep. Tlaib: “Israel Is a Racist State That Would Deny Palestinians Like My Grandmother a Vaccine”