The Supreme Court heard arguments on Wednesday in a case that could shape the outcome of future presidential elections. The question at hand was whether Electoral College members can “go rogue” and support candidates who did not win the state’s popular vote. In 2016, one of Colorado’s nine electors, Michael Baca, attempted to cast his Electoral College ballot for Republican John Kasich instead of Democrat Hillary Clinton. The Colorado secretary of state at the time — a Republican — removed Baca as an elector. Colorado is one of 31 other states that has a law requiring presidential electors to vote for the candidate who wins the state’s presidential election popular vote. Baca sued Colorado, and the Denver-based 10th U.S. Circuit Court of Appeals ruled his removal was unconstitutional. The case reached the Supreme Court this week. We speak with Colorado Secretary of State Jena Griswold, who says, “What is at stake in this case is the foundation of our democracy.”

StoryOct 29, 2020“Drop Your Ballot Off”: Supreme Court Rulings on Mailed Ballots Sow Doubt on Which Votes Will Count

AMY GOODMAN: This is Democracy Now!, democracynow.org, The Quarantine Report. I’m Amy Goodman. For the first time in its history, the Supreme Court is holding oral arguments remotely by phone, and the audio is available live to the public, leading to some unprecedented moments, including, oh, a live toilet flush.

ROMAN MARTINEZ: And what the FCC has said is that when [toilet flushing] the subject matter of the call ranges to such topics, then the call is transformed.

AMY GOODMAN: Well, on Wednesday, the Supreme Court heard arguments in a case that could shape the outcome of future presidential elections.

Many states have laws requiring members of their Electoral College to pledge that they’ll support the winner of the state’s popular vote. But in 2016, some electors went rogue. One of Colorado’s nine electors, Michael Baca, attempted to cast his Electoral College ballot for Republican John Kasich instead of Democrat Hillary Clinton. Kasich won Colorado’s presidential election over Republican Donald Trump. Then, the Colorado secretary of state at the time, a Republican, removed Baca as an elector.

Colorado is one of 31 other states that has a law requiring presidential electors to vote for the candidate who wins the state’s presidential election popular vote. Baca sued Colorado. The Denver-based 10th U.S. Circuit Court of Appeals ruled his removal was unconstitutional. The case then made its way to the Supreme Court on Wednesday.

This is Supreme Court Justice Clarence Thomas questioning attorney Jason Harrow, who argued on behalf of the Colorado electors.

JUSTICE CLARENCE THOMAS: The elector, who had promised to vote for the winning candidate, could suddenly say, “You know, I’m going to vote for Frodo Baggins. And that’s — I really like Frodo Baggins.” And you’re saying, under your system, you can’t do anything about that.

JASON HARROW: Your Honor, I think there is something to be done, because that would be to vote for a nonperson, you know, no matter how big a fan many people are of Frodo Baggins. That said, I do think the important point is that the framers hashed out these competing concerns. They hashed it out in Philadelphia in 1787. They understood the stakes, and they said, among these competing hypotheticals, electors are best placed to make the ultimate selection. That hasn’t changed, Justice Thomas.

AMY GOODMAN: The Supreme Court also heard a related case Wednesday from Washington state on whether it could issue $1,000 fines for three presidential electors who also tried to block Trump from becoming president by backing former U.S. Secretary of State Colin Powell. Well, to put all of this in perspective, a swing by just 10 electors would have been enough to change the outcomes in five of the previous 58 presidential elections.

For more, we go to Denver, Colorado, where we’re joined by Colorado Secretary of State Jena Griswold.

Welcome back to Democracy Now! Can you start off by talking about what exactly a faithless elector is, and what is at stake with the Supreme Court decision?

SECRETARY OF STATE JENA GRISWOLD: Sure. Good morning. Well, a faithless elector is an elector who decides to vote their own will, following their own agenda, and effectively disenfranchises American citizens. Here in Colorado and in the majority of states, the law says that presidential electors must carry out the will of the people and must cast their electoral ballot for whomever wins the state’s popular vote.

And what is at stake in this case is the foundation of our democracy. Can a couple unelected, unaccountable electors disenfranchise every American in the presidential election? Or do Americans truly have their voices heard in our presidential elections, and their ballots counted? And does that mean something? And as secretary of state, I think it should mean something.

AMY GOODMAN: So, talk about the two cases, your case in Colorado, who Baca is, and also the Washington state case, and how you think they both went.

SECRETARY OF STATE JENA GRISWOLD: I think the cases went extremely well for the states. The Supreme Court really focused on the practical effects of allowing electors to undermine American citizens. And they really honed in on one of my top concerns, and that’s corruption and bribery. Under our current 10th Circuit holding, effectively, as secretary of state, someone could walk up with a bag of money, hand it to the elector right in front of me, and I would not have the power to remove that elector.

And I would just say that these concerns are amplified, knowing that Russia is trying to undermine our democracy. The idea of blackmail — we all know how easy it is to do a deepfake video or search information on folks and blackmail them or coerce them to vote how you want them to vote. So, the ability to enforce state law, the ability to ensure that a state’s electoral ballot goes for whoever wins the state’s actual election, is paramount.

CHIEF JUSTICE JOHN ROBERTS: I take your answer, when I ask for limits, to be that they must be allowed to vote in their discretion, that you don’t have any limits.

JASON HARROW: Your Honor, there are no limits in that voting ballot, so long as the ballot is for a person. The 12th Amendment says they must vote for a person. You can imagine — indeed, you don’t have to imagine that if —

CHIEF JUSTICE JOHN ROBERTS: But what are they supposed to — like, not a giraffe? I mean, of course they have to vote for a person.

JASON HARROW: Your Honor, Congress concluded in 1872 that the Greeley vote wasn’t a vote for a person, because it was a vote for a nonliving person. I’m sorry if I was unclear. That’s the situation that I meant.

AMY GOODMAN: So, if you can explain that, Jena Griswold?

SECRETARY OF STATE JENA GRISWOLD: Sure. I think that really highlights the preposterous nature of the opponents’ argument. The idea that the only requirement on electors is that they cast their ballot for a living person is — and that they can disenfranchise every single American, they can take bribes, and they can throw this country into chaos, is just not reasonable. Not only did the court really hone in on the ridiculousness of possibly voting for Frodo Baggins — by the way, I would vote for She-Ra or Wonder Woman, though I really like The Lord of the Rings — just really highlights the practical effect of this case.

Outside of concerns for bribery, various justices really honed in on what this does to presidential campaigns. If the states were to lose, presidential campaigns and then Americans’ votes would just be advisory. And then we could see a second wave of campaigns just for electors, so presidential candidates and campaigns focused on trying to flip electors. And the justices, rightly or wrongly so, didn’t seem to want that to happen. More campaigning for the president wasn’t something that really seemed to strike well with them.

And then, on top of that, there was a great argument from the Washington solicitor general that basically was along the lines of, once Americans have the right to vote, you cannot take that away by allowing electors to take away all of our voices. So, overall, I was very happy with the Supreme Court justices’ lines of questioning, and I think it bodes well for the states.

AMY GOODMAN: Well, I want to thank you very much, Jena Griswold, for being with us. Jena Griswold is secretary of state of Colorado. But I wanted to ask you to stay with us for this next segment —

SECRETARY OF STATE JENA GRISWOLD: Sure.

AMY GOODMAN: — when we come back, because Colorado plays an interesting role in the elections, especially when it comes to mail-in ballots. “Can Democracy Survive the Pandemic?” We’ll also be joined by New York Times Magazine writer Emily Bazelon. Stay with us.

AMY GOODMAN: “Greenwaves” by Secret Garden. Dancing is longtime Democracy Now! engineer Mike DiFilippo alongside his partner Regina Calandra in quarantine. But like most of the Democracy Now! staff, while they are in isolation, they are still here with us in spirit.

“Can Democracy Survive the Pandemic?”: Election Hangs in the Balance as Trump Attacks Mail-In Voting 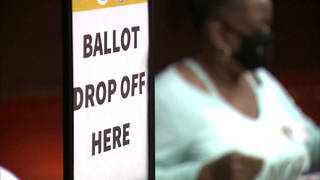 “Drop Your Ballot Off”: Supreme Court Rulings on Mailed Ballots Sow Doubt on Which Votes Will Count