In the Bronx, the second most economically unequal district in New York state, the insurgent primary campaign of former middle school principal Jamaal Bowman threatens to unseat 16-term Democratic congressmember and House Foreign Affairs Committee Chair Eliot Engel. Bowman supports defunding the police, Medicare for All and a Green New Deal. He has also gotten high-profile endorsements from Senators Elizabeth Warren and Bernie Sanders, Representative Alexandria Ocasio-Cortez and The New York Times editorial board. “I’ve worked in this district for the last 10 years as a middle school principal,” Bowman says. “Over that 10 years, I’ve developed thousands of amazing relationships with the children and the families of this community, and I’ve learned intimately the impact of poverty and bad policy on their lives each and every day.”

AMY GOODMAN: This is Democracy Now! I’m Amy Goodman, with Juan González, as we turn to the second most economically unequal district in New York state. That’s the Bronx, where an insurgent campaign for Congress is threatening to upset the Democratic establishment as protests against police and systemic racism continue to roil the country.

Not far from where Alexandria Ocasio-Cortez took down longtime Congressmember Joe Crowley in 2018, former middle school principal Jamaal Bowman is now running to unseat 16-term congressmember, House Foreign Affairs Committee Chair Eliot Engel and represent New York’s 16th Congressional District in the Bronx and Westchester County. Bowman is running on a Green New Deal, Medicare for All platform and has responded to the recent spate of protests across the country by saying he supports defunding the police.

Congressman Engel, meanwhile, has called for police reform. The congressman has also faced criticism for his support of the 1994 crime bill, for spending much of his time in his home in Maryland rather than in his district. Earlier this month, Engel was caught on a News 12 mic asking Bronx Borough President Rubén Díaz Jr. if he could speak at a rally after a night of protests against police violence. He then told Díaz that, quote, “If I didn’t have a primary, I wouldn’t care,” unquote.

Well, he is joining us now from Yonkers, New York, just finished up with a campaign event there.

Jamaal Bowman, thank you for joining us on Democracy Now! Can you talk about why you think your campaign can succeed — you’ve gotten a number of extremely important endorsements — and what you feel is the most important message out of these anti-police-brutality protests around the country, that are also focused very much right here in New York?

JAMAAL BOWMAN: Well, thank you so much for having me. Good morning.

I have worked in this district for the last 10 years as a middle school principal. I actually opened my own community public school right here in the Northeast Bronx. And over that 10 years, I’ve developed thousands of amazing relationships with the children and families of this community, and I’ve learned intimately the impact of poverty and bad policy on their lives each and every day.

And what I also learned was that Congressman Eliot Engel has been incredibly absent and disengaged in most of the district. He does a good job of engaging about 9% of the district, while the rest of the district feels unheard and unsupported in terms of what they’re going through.

With regard to the protests happening across the country, I’m inspired by it. I’m excited by it. If you look throughout American history, it has been protests and mass movements and the people rising up that has moved to this country forward. That’s what’s happening now. Unfortunately, it had to happen at the hands of George Floyd’s death and Ahmaud Arbery’s death and so many others. But it’s good to see the people rising up, and it’s good that so many have galvanized behind our campaign.

JUAN GONZÁLEZ: And, Jamaal Bowman, could you talk about your experience as a teacher and a principal in the Bronx and what made you decide to throw in your hat in this race, which is, again, against one of the Democratic moderate senior officials of the Democratic Party in Congress?

JAMAAL BOWMAN: Yeah. So, I started teaching in 1999 in the South Bronx. I’ve spent 17 of my 20 years in education in the Bronx, both as a teacher and a middle school principal. And as we all know, our schools are chronically underfunded and underresourced, but our communities have been historically neglected through policies like redlining and disinvestment. And we continue to support Wall Street and the wealthy among us. We continue to allow large corporations like Amazon to get away without paying federal taxes. And we continue to support out-of-control spending in our military-industrial complex.

All the while, the kids that I serve struggle with mental health supports — a lack of mental health supports, struggle with housing insecurity, food insecurity, lack of job opportunities, environmental racism. You name it, my kids and families have struggled with it. And I got tired of seeing or not hearing the most vulnerable in our community centered in our political discourse, and our children not at the top of the political agenda. It just became unacceptable to me. And I’ve done a lot of organizing work for education reform, education justice, around trauma-informed schools, fully funding our schools, pushing back against the overuse of standardized testing. And I just felt no sense of urgency around what’s happening with our kids every day, and it just became unacceptable.

AMY GOODMAN: If you could talk about, Jamaal Bowman, your demand to defund the police, joining that growing cry throughout the country, that demand? What does it mean to you? What does it mean in New York? And also, your response to the police commissioner just holding a news conference and saying he’s disbanding the entire 600-person anti-crime unit, that is so often known for being undercover, responsible, I believe, for most of the shootings in New York, police shootings?

JAMAAL BOWMAN: Yeah, I think it’s an excellent first step. And it’s a direct response, as I said before, to the protests and the uprisings happening here in the city and across the country.

We need to defund the police because we need to demilitarize our police. We need to stop sending federal military equipment to local police departments. And we need to focus on accountability and transparency. We need to end qualified immunity at the federal level, where police can violate a person’s civil rights with impunity, which we’ve seen happening time and time again. And we need to reallocate and reinvest those resources in community health and community development, so fully investing in our public schools by hiring more teachers, hiring more nurses in healthcare, investing in job programs and everything that creates the infrastructure for collective and self-actualization and determination in our communities.

Unfortunately, we continue to disinvest in our communities and add more police to communities, so that they feel occupied. That’s unacceptable. It’s been going on far too long. It’s a manifestation of institutional racism through police brutality. And that’s why we call for truth and reconciliation, massive financial investment and massive focus on mental health, social workers and public health overall.

JUAN GONZÁLEZ: And, Jamaal Bowman, I wanted to ask you about the forces arrayed against you on the side of Eliot Engel, from, of course, Hillary Clinton, making one of her first endorsements on a congressional race of this year for Eliot Engel, as well as a major political action committee that receives Republican — a lot of Republican money, and a major lobbying group, a pro-Israel lobbying group, all behind Engel, on top of the Bronx Democratic — the infamous Bronx Democratic machine.

JAMAAL BOWMAN: I mean, that’s fine. I mean, that is what it is. That’s not what we can control. I think what it shows the public and the country is that we’ve been running an incredibly strong campaign. You know, we have an amazing team. We have an amazing campaign manager, comms director. I mean, we’ve been running a strong campaign. And we’re just focused on doing our job and connecting as much with the voters throughout the district as possible. You know, we’ve canvassed the entire district from the very beginning, building strong, authentic relationships, from Scarsdale to Rye to Co-op City to Edenwald to Yonkers and everywhere in between.

And, you know, we’re six days away from bringing home this victory. I don’t know if you saw the recent polling that came out. It has us 10 points ahead. So we’re doing very well, and we have our own supports, from Congresswoman Ocasio-Cortez, Congresswoman Katie Porter, Senator Sanders, Senator Elizabeth Warren and The New York Times, as well as local elected officials, like Senator Gustavo Rivera, state Senator Alessandra Biaggi and New York City Comptroller Scott Stringer, as well as many other grassroots organizations.

AMY GOODMAN: Well, Jamaal Bowman, I want to thank you for being with us. In 10 seconds, can you tell us: How is to campaign on the ground in this area, which has been known as the epicenter of the pandemic, what it means for you? We’re talking to you in Yonkers now, where you just did an event.

JAMAAL BOWMAN: Absolutely. So, it means being safe, so maintaining social distancing, making sure we’re wearing masks, but to still be present and engaged and to still be listening to the needs of the people on the ground.

And that does it for our show. Democracy Now! is produced by an amazing team on the ground. Special thanks to Julie Crosby, produced with Renée Feltz, Mike Burke, Deena Guzder, Libby Rainey, Nermeen Shaikh, Carla Wills. I’m Amy Goodman, with Juan González. Stay safe. 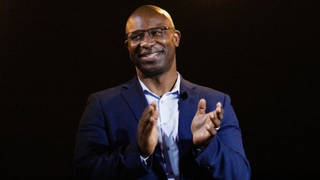