Reverend C. T. Vivian, whom Dr. Martin Luther King Jr. once described as “the greatest preacher to ever live,” died July 17 at age 95. Vivian was a giant of the civil rights movement and a leading proponent of nonviolent struggle against injustice. He spoke to Democracy Now! in 2015 outside the historic Brown Chapel AME Church in Selma, Alabama, on the 50th anniversary of Bloody Sunday in 1965. Vivian describes how he was assaulted on the steps of the courthouse as he tried to escort a group of African Americans inside to register to vote. “There is nothing we haven’t done for this nation,” Vivian said of the civil rights movement and the ongoing fight for voting rights. “But we kept knowing the scriptures. We kept living by faith. We kept understanding that it’s something deeper than politics that makes life worth living.”

AMY GOODMAN: This is Democracy Now! I’m Amy Goodman. The same day Congressmember John Lewis passed away — that was Friday — we lost another civil rights legend, Reverend C. T. Vivian. He died at the age of 95.

Vivian was a leading proponent of nonviolent struggle. He was with the Southern Christian Leadership Conference, close friend of Dr. Martin Luther King Jr., who once described him as “the greatest preacher to ever live.”

In 2015, I spoke to Reverend Vivian outside the historic Brown Chapel AME Church in Selma, Alabama, on the 50th anniversary of Bloody Sunday. On that day in 1965, he was punched in the face by Dallas County Sheriff Jim Clark on the courthouse steps in Selma as he tried to escort a group of African Americans inside to register to vote. The punch was so hard, the sheriff broke his own hand. Reverend Vivian started by talking about the power of nonviolence and the continued fight for voting rights.

AMY GOODMAN: Do you think full voting rights have been achieved at this point?

REV. C. T. VIVIAN: No, because America won’t change that quickly, see? Or if they had of, they would have done it in 1776. There is nothing we haven’t done for this nation. We’ve died for it. But it’s been overlooked, what we’ve done for it. But we kept knowing the scriptures. We kept living by faith. We kept understanding that it’s something deeper than politics that makes life worth living.

AMY GOODMAN: What gave you the courage 50 years ago to stand up at the courthouse, to make that walk?

REV. C. T. VIVIAN: This is a national problem. You can’t keep anyone in the United States from voting without hurting the rights of all other citizens. Democracy is built on this. This is why every man has the right to vote, regardless.

REV. C. T. VIVIAN: Our faith. Our grandmothers and great-grandmothers taught us how to live, right? Even when they couldn’t speak well, as long as what the society was concerned about. What they were telling us about is as old as the universe itself.

AMY GOODMAN: Can you describe what happened to you, the violence against you, even leading up to March 7th, when you stood up for voting rights?

REV. C. T. VIVIAN: It’s the understanding of nonviolent direct action. That’s the change. Look, what we have to see, beyond all things, is that Martin King, right, was our leader. What we have and what was given to us from its very beginnings is an understanding that we could not win by killing. Light doesn’t come because of darkness, all right? We are here to change America, and always have been. America sees it as they are changing us. But, you see, when a Christian church exists that doesn’t want to accept anybody but white people, right, they’ve already denied the faith, all right? Can you be a Christian and a racist at the same time? See, and we refuse to be racist, right? We just want to simply tell America what their faith is about. America talks about democracy, but they’ve kept us from voting for years. And even when they give us the vote on paper, politically, they turn around and take away the important part of what we fought for and what they said they were giving, all right? The truth is that we have to work together to save ourselves politically, save ourselves spiritually and save ourselves physically. We’re not going to be able to do it until we listen to the faith without the hate. When a preacher has to stand at the door and keep people out because of the color of their skin, something’s wrong with their faith.

AMY GOODMAN: Did you stand in front of Sheriff Clark and get punched in the face?

REV. C. T. VIVIAN: Well, yes, but that’s not why I was standing there.

REV. C. T. VIVIAN: We’re willing to be beaten for democracy, and you misuse democracy in the street!

REV. C. T. VIVIAN: The point being is I was standing in front of him because we don’t have to fear the opposition, and we are willing to die for the freedom they say they have, all right?

AMY GOODMAN: And when he attacked you, especially for young people to understand your thoughts at the time, what went through your mind?

REV. C. T. VIVIAN: Is that the problem was him. I wasn’t the problem. He was trying to get rid of us, so that he could act as though that the problem was us. The problem is never the person that’s being beat, all right? It’s the person that doesn’t have a reason to beat people and beats people, who hates people and have no reason for it, right? We’ve done nothing. What have we — what have we done to America that they should hate us so, right? We haven’t done it to America. America is — but you can state 30 or 40 things very quickly about what “American democracy,” quote-unquote, has done to us. And we were just trying to live for the faith. Died in every war — every war, all right? And yet anybody who came here 10 minutes later was accepted.

AMY GOODMAN: Civil rights legend C. T. Vivian. I interviewed him in 2015 in Selma, Alabama. Reverend Vivian died on Friday at the age of 95. His funeral is scheduled for Thursday at Providence Baptist Church in Atlanta. Out of respect for Reverend Vivian, the Lewis family says they’ll wait 'til after his services to announce their plans for Congressmember Lewis's memorial. To see the full interviews, democracynow.org. I’m Amy Goodman. 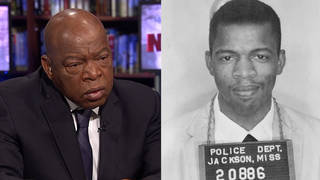