“Prisons Are Not Fit for Human Occupation”: San Quentin Prisoners Speak Out as Virus Deaths Reach 25

California’s notorious San Quentin State Prison is experiencing the worst coronavirus outbreak in the United States. At least 2,200 prisoners have been infected, and 25 have died. More than 260 staff members have also been infected. We hear from two people incarcerated at San Quentin about conditions inside and the punitive measures authorities have taken against prisoners campaigning for better safety measures, and speak with James King, a member of the Stop San Quentin Outbreak Coalition. “The conditions at San Quentin are horrific,” says King, who was incarcerated at San Quentin from 2013 until December 2019. “You have these tightly confined spaces where people are living in close proximity to each other with no ability to physically distance.”

AMY GOODMAN: This is Democracy Now! I’m Amy Goodman, with Juan González, as we turn to California, where the state’s San Quentin prison faces the country’s largest coronavirus outbreak. At least 2,200 prisoners have been infected with the virus. Twenty-five have died. More than 260 staff at San Quentin have also been infected. Prison guard Gilbert Polanco is now the first to die, after he reportedly worked extra shifts when dozens of his fellow guards fell ill with the disease. Executions have been on hold in California since last year, but the latest prisoner to die on Sunday was Pedro Arias, who had been on San Quentin’s death row since 1990.

Democracy Now! spoke by phone with incarcerated journalist Juan Haines, who’s among the thousands at San Quentin who have been infected with COVID-19, about why the prison, which was built in the 1850s, is facing this coronavirus outbreak.

JUAN HAINES: The architectural design of California prisons are not fit for human occupation. It’s just not. But we’re a resilient species, and we adapt to whatever the physical environment is. But the unfortunate thing is that the virus doesn’t care about that adaptation. That’s why so many people in San Quentin are dying, because we can’t physically distance ourselves from each other. And what’s so hurtful about this fact that we can’t physically distance from each other, so any type of contagion that gets inside of this prison is going to spread like wildfire.

Some prisoners report being punished with solitary confinement and squalid conditions for getting sick. This is 52-year-old Michael Adams, who spoke to Democracy Now! producer Libby Rainey by phone last week.

MICHAEL ADAMS: I call it the bowels of San Quentin, because it’s so dark, it’s so dank. There was no electricity. Hot water was sparse. And then the cells are smaller than the ones that are in North Block. And for the 43 days that I was back there, the person that had come in the cell with me had more property than I had, so we’re literally crawling over boxes in a cell that’s smaller than the average 5-by-9, just to be able to use the bathroom and things like that. Absolutely crazy. Showering once a week, phone calls once a week, and no medical attention, save for them coming to the cells and asking for oxygen, meaning an oxygen reading. And then there was a thing where the people that were coming and taking the oxygen readings and the temperature readings — we were trying to figure out: “Why do you need this?” And they were like, “Well, we need statistics. We need data.”

LIBBY RAINEY: Do you know any of the people that have actually died?

MICHAEL ADAMS: I’ve known about two of the people who have died.

For more, we’re joined by James King, state campaigner for the Oakland-based Ella Baker Center for Human Justice, member of the Stop San Quentin Outbreak Coalition, he himself incarcerated at San Quentin from 2013 until last December and has been monitoring the situation there closely.

Welcome to Democracy Now! It’s great to have you with us, James. If you can elaborate on what these prisoners have said? We spoke to Juan when he — before he got COVID-19, when he was saying this place is going to suffer an outbreak like we’ve never seen before, if the state doesn’t do something about this now. Can you explain what happened and what needs to be done now, James?

JAMES KING: Sure. On May 31st, California Department of Corrections and Rehabilitations made the decision to transfer 121 people from California Institution for Men, which at the time was the largest outbreak in the state, to San Quentin State Prison, our oldest prison in the state. It was a horrible —

AMY GOODMAN: That was in Chino?

JAMES KING: That was Chino. And at the time, San Quentin was already well over 120% of capacity. So, to bring in the additional people, many of them actually already showing symptoms on the bus ride to San Quentin, turned out to be a horrific, horrific debacle and mistake.

The conditions at San Quentin are horrific. There, in West Block and in North Block, which are where most of the population is housed, those two buildings are each designed to hold a little bit over 400 people. They both hold close to 800 people within them. There’s no ventilation within the buildings. The windows are in fact welded shut. And the ventilator system hasn’t been turned on in several, several years. There are also like no access to cleaning supplies, or very limited access to basic hygiene products, in addition to everything else. So you have these tightly confined spaces, where people are living in close proximity to each other with no ability to physically distance.

JUAN GONZÁLEZ: And what steps are you calling for officials to take in terms of releasing people from San Quentin? And your reaction to Governor Newsom saying that he will not release any prisoners who have been convicted of violent offenses?

JAMES KING: Well, two things. Number one is, like, we’ve been horrified to note that at San Quentin, 10 weeks after the outbreak, the prison is still at over 100% capacity. Public health officials in mid-June called for a dramatic reduction. They said that at least a 50% reduction needs to happen in the population there and at every prison throughout the state and country, frankly.

In order to get there, you have to stop looking at what a person may have done 20, 30, 40 years ago. Quite frankly, the vast overwhelming majority of people incarcerated at San Quentin are not a threat to public safety. And that idea that they would be still violent or still a threat is contradicted by the California Department of Correction and Rehabilitation’s own data. I think the vast majority can be released safely and urgently in order to bring down the — in order to flatten the curve on the virus.

JUAN GONZÁLEZ: And what’s your sense of how the media coverage of the situation in America’s prisons, in California prisons in particular — how the media is covering this issue?

JAMES KING: I think that it’s been largely problematic in two senses. One is this idea that these are merely prison outbreaks. I understand it’s built off of decades of otherizing and demonizing people who have committed harmful acts in our country. But when we other and think of this as only prison outbreaks, and ignore the fact that hundreds of people are traveling inside and outside of these outbreaks daily and working in them and then returning to their families and to the community, it causes us to create bad policy as it relates to pausing this pandemic.

But then, secondly, there was a headline recently that said that California Department of Corrections and Rehabilitation was releasing murderers. Well, that’s not true. What they’re releasing are people who have dealt with their harmful acts, who have been safe and have not conducted any violence in decades. So, the rhetoric around the labels of people who committed harmful acts like 20, 30, 40 years ago, that is presenting them as static and still a threat to public safety, ignores the larger threat to public safety, which is the pandemic and the virus itself.

AMY GOODMAN: James, this is from the Los Angeles Times: “San Quentin’s death toll translates to a mortality rate of about 767 people dying out of every 100,000.” It would be as if right now the United States had two-and-a-half million deaths from COVID-19. We heard the prisoner Juan Haines, who we’ve had on Democracy Now! several times, who came down with COVID, is suing. We just have 20 seconds. What is this lawsuit?

JAMES KING: This lawsuit, this habeas, is just saying that hospitals are quickly — are not equipped to deal with this pandemic. There’s no way a prison can. And as Juan said earlier, this is a situation where the prison cannot keep people safe, so people need to be released, so that they can safely isolate and quarantine and flatten the curve of this virus.

AMY GOODMAN: Well, I want to thank you so much for being with us. We’ll continue to be on this story. James King, state campaigner for the Oakland-based Ella Baker Center for Human Justice and a member of the Stop San Quentin Outbreak Coalition.

That does it for our show. I’m Amy Goodman, with Juan González. Stay safe. Save lives. Wear a mask. 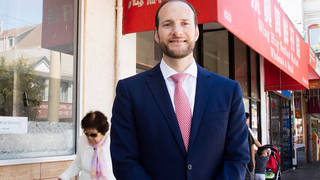