As climate-fueled wildfires engulf California, tens of thousands of firefighters have been deployed across the state to combat the blazes amid a record heat wave and deadly pandemic. We look at how more than 1,300 incarcerated firefighters — who are annually deployed to the frontlines in California for just $1 an hour — are fighting back the blazes as coronavirus outbreaks in state prisons limit how many are available to fight the fires, and lay bare the state’s reliance on prison labor to control its ever-growing wildfire season with an exploitative system many have called slave labor. “What they’re not saying is we lack the incarcerated firefighters … [who] make up the backbone of the firefighting department,” says Rasheed Lockheart, who was a firefighter at San Quentin State Prison until his release in January.

AMY GOODMAN: This is Democracy Now!, breaking with convention. I’m Amy Goodman, with Juan González, as we turn to California, where climate-fueled wildfires are engulfing the state. Crews are battling more than 600 fires, that have killed at least seven people. Governor Gavin Newsom said Monday 300 lightning strikes overnight had sparked 10 new fires. The biggest group of fires, in Northern California around Napa, is now 25% contained. So far this year, 7,000 fires have destroyed 1.4 million acres, compared to 56,000 acres burned at the same time last year. Tens of thousands of firefighters have been deployed across the state to combat the blazes, which are raging as California also battles a record heat wave and the deadly pandemic.

Over the weekend, Democracy Now! reached former incarcerated firefighter Marty Vinson by phone. He was stationed at Delta Camp in 2018, where Democracy Now! first met him. In an interview, Vinson called the prison firefighting program California’s “piggy bank” and spoke out about the conditions firefighters at Delta Conservation Camp are currently facing.

MARTY VINSON: I imagine the worst. I honestly do. I feel like I can imagine them working much longer hours. So, we normally do 24 on, 24 off. I can imagine doing anywhere — because it’s possible, you can do a 48 to 72 hours. There’s just so many things that go on out there, regardless if it’s natural things that can kill you or let alone a human being that’s making a decision that can possibly kill you. But I believe this is probably the worst conditions, and the firefighters are probably going through their worst experience ever.

The prisoner firefighter shortage has laid bare California’s reliance on prison labor to keep its ever-growing wildfire season at bay — an exploitative system many have called slave labor. California saves up to $100 million a year by using prison labor to fight its biggest environmental problem. And once released, it’s nearly impossible for formerly incarcerated firefighters to get jobs with county or city fire departments in California.

For more, we go to Oakland, where we’re joined by activist and formerly incarcerated firefighter Rasheed Lockheart. He’s a firefighter at San Quentin State Prison — he was — was released in January. He is an organizer with the group Planting Justice in Oakland.

Welcome to Democracy Now!, Rasheed. It’s great to have you with this. Can you talk about what’s happening right now? California is talking about a firefighter shortage because prisoner firefighters, a number of them, have been released due to COVID or are sick with COVID. Explain what’s going on and the fact that they make a dollar an hour, if they’re healthy enough to fight the fires.

RASHEED LOCKHEART: Yeah, so, these conditions, they’re just — I mean, they’re implorable. I mean, you have, I believe it’s 600 less firefighters this year, and we’re facing some of the largest wildfires that we’ve ever had in the state. These guys are out 24, 48 hours at a time. That young man came from Delta Camp. That camp, they are — I just talked to somebody there, and they’re leaving at 5:00 in the morning, not getting back 'til 8:00 at night. And this is every day. So they're being overworked, and for, you know, a dollar an hour. I mean, you know, they’re working alongside firefighters that aren’t incarcerated people, that are making — we don’t know how much, and putting their lives on the lines. And it’s just — it’s a little bit of a human tragedy. They’re fighting — they’re battling COVID-19, and they’re battling wildfires at the same time.

JUAN GONZÁLEZ: Rasheed, I wanted to ask you about Kamala Harris, the nominee of the Democratic Party for vice president. When she was attorney general of California, she advocated against early release programs for incarcerated people, because it would reduce the number of incarcerated firefighters. Could you talk about her role and this whole issue of the politics of how to deal with the incarcerated and the fighting of fires in California?

RASHEED LOCKHEART: Yeah, well, the fact is, it impacts our state economy, right? They’re saving $100 million a year on having formerly incarcerated individuals fighting these fires. And it’s a little bit of a slap in the face to those of us who are incarcerated, who are trying to, you know, be the best that we can be and put our lives on the lines to go out here and fight these fires. But, you know, her doing that and being a part of mass incarceration as the district attorney, she essentially is signing people up for slavery, right? You want these guys to go out and fight these fires and do it for only a dollar an hour, and then you’re turning around and saying, “Oh, we don’t want to release anybody, because it’s going to cost the state this much”? It’s deplorable.

AMY GOODMAN: [inaudible] came out. And later, when she became senator, she said that it was her prosecutors who argued this in court. She said she thought it was reprehensible — not at the time. She says she didn’t know about it, but said the buck stops with her, and so she took responsibility. It’s unclear if she knew about it. But this whole issue of firefighters like you, you come out of prison, you’re extremely experienced. Cal Fire sings your praises, because you’re doing the most difficult work. Yet you find it so difficult then to become a firefighter. Like, right now for the many people who are released, even perhaps early because of the COVID pandemic, why don’t they just immediately hire you, since you have the experience, you’ve fought these fires, at Cal Fire salaries, not to mention giving more money to the prisoner firefighters?

RASHEED LOCKHEART: Yeah, that’s the question, right? I mean, you take, like, myself. I was a lead engineer on a Type 1 fire engine and a lead on an ambulance crew. I don’t know what more qualification you would need, right? That should automatically entitle me to go right into a department upon my release. But that’s just not the case. You know, for, like, me being more of a municipal firefighter, they want us to have an EMT certifications, and state law right now currently blocks me from getting that. If there is —

AMY GOODMAN: Because you were formerly in prison?

RASHEED LOCKHEART: Because I was formerly in prison, yes. And right now, like, we’re hearing Cal Fire get on these interviews and say that we just lack resources. Well, what they’re not saying is we lack the incarcerated firefighters. That’s the issue, right? Because we make up the backbone of the firefighting department. And if we’re saving the state $100 million, how much more can we save the state by taking formerly incarcerated people coming out of these fire camps, coming out of these firehouses, and putting them right into employment?

JUAN GONZÁLEZ: I’m wondering: When you were out there fighting these fires, to what degree did you encounter National Guard troops? Because I’ve been surprised, time and again, at how few National Guard are mobilized when these fires spread in California.

RASHEED LOCKHEART: Well, I myself am not qualified to answer that, because I was at any actual functioning firehouse. I wasn’t at a camp. So I didn’t get to go out to a wildland firefighters. I instead was resided to the city of San Quentin, the quote-unquote “city of San Quentin,” and where they had a full residency around there. And so I was doing basically municipal firefighting.

AMY GOODMAN: And can you talk about what you did when you were in prison, or what you’ve heard people are doing, for example, at San Quentin, with the COVID outbreak? I mean, you have, one of the worst outbreaks in this country is in the prison system of this country.

RASHEED LOCKHEART: Yeah. So, what people are doing right now, and what I’m hearing, is they’re essentially just sheltering in fear. Right? The conditions are not — San Quentin is not designed to have an outbreak like COVID-19. It’s impossible to practice social distancing. It’s overcrowded. And then people are being herded off into tents and into — back into gymnasiums that — I don’t know if you remember, about five, 10 years ago, there was an outcry about the way they were housing people in these gymnasiums. And so, San Quentin is just not set up for this type of outbreak. And so, my — incarcerated people that are still there are sheltering in place.

My fire crew that’s there at San Quentin, they’re getting more calls than they can handle. I talked to one of my incarcerated firefighters who had said that, that morning — it was only 11 a.m. in the morning — that they had been on five calls. But they had only been on five calls that morning because they couldn’t get to the other 11 that were happening. So, it’s a human tragedy, what’s happening in San Quentin. And the incarcerated people that are there are living in fear.

AMY GOODMAN: Well, Rasheed Lockheart, we want to thank you so much for being with us. Rasheed worked as an incarcerated firefighter at San Quentin State Prison, was released in January, now an organizer with Planting Justice in Oakland.

And this update in the police shooting in Kenosha, Wisconsin, of Jacob Blake, an unarmed 29-year-old Black man: Blake’s father says his son is now paralyzed from the waist down. Protests continue there and across the country. Blake’s father will also speak at the virtual march on Washington, D.C., this weekend, along with other family members. 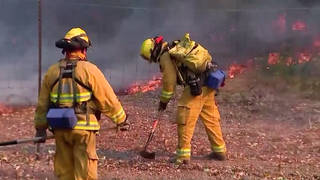