Hurricane Laura has slammed ashore as an extremely dangerous Category 4 storm, bringing sustained winds of 150 miles per hour to the Gulf Coast. The strongest storm to hit Louisiana in over a century, Laura made landfall near the border of Louisiana and Texas. At least six people have been killed. Residents near Lake Charles were told to stay indoors with windows and doors shut when a chemical fire broke out at a BioLab plant. Hilton Kelley, the executive director of the Community In-Power and Development Association, says local communities are dealing with multiple crises amid the devastation of the hurricane. “People are ingesting all of these dangerous toxins and at the same time dealing with COVID-19 and the extreme heat,” he says.

AMY GOODMAN: This is Democracy Now! We’re Breaking with Convention. I’m Amy Goodman, as we go to the Gulf Coast, where Hurricane Laura slammed ashore Wednesday as a Category 4 hurricane, the strongest to hit Louisiana in over a century before it was downgraded to a tropical storm, then tropical depression. Laura made landfall south of the city of Lake Charles near the border of Louisiana and Texas. At least six people were killed.

The Gulf Coast is home to more than half of U.S. refining capacity. And as they shut down ahead of the storm, an analysis by the environmental news outlet Grist showed just nine of the refineries would produce some 4 million pounds of excess hazardous chemicals. Hurricane Laura arrived 15 years after Hurricane Katrina struck Louisiana, and sets a record pace as the seventh named storm to make landfall in the United States so far this year.

For more, we’re joined by Hilton Kelley, who lives in Port Arthur, Texas, which is about an hour from where the eye of the storm passed, home to the largest oil refinery in the Western Hemisphere, the Motiva refinery.

Hilton Kelley, you’re facing five crises all at once: hurricanes, rising sea levels, air pollution, extreme heat and COVID. Lay it out for us.

HILTON KELLEY: Well, hello. Thank you for having me on the show.

Number one, we are dealing with a major, major issue here in the Gulf Coast, particularly with COVID-19 and preexisting conditions that many of the citizens are dealing with here. Of course, with all the refineries and chemical plants in our area, there is a large amount of various toxins that are released into the environment which we live in, in the Port Arthur, Orange, Beaumont, Lake Charles and Cameron, Louisiana, area.

AMY GOODMAN: So, talk about the difficulty of the evacuation. You, too, finally evacuated after NOAA called you and begged you, your wife called you and begged you, because they were talking about 20-foot storm surges. But if you can talk about the difficulty, in a time of COVID, I mean, setting up shelters, how people could be protected, even going in the buses?

HILTON KELLEY: Well, one of the biggest concerns we had, and also the mayor of Port Arthur, Mayor Thurman Bartie, was the fact that here we are, dealing with a disproportionate number of people suffering in the city of Port Arthur in Jefferson County with the COVID-19 virus. I know about three people personally that have succumbed to the coronavirus, and it’s running rampant throughout not only this country, but also in small towns like Port Arthur, Texas, Beaumont and Jefferson County. But yet here we are now faced with these major storms as we look down the barrel of Hurricane Laura, and they talked about the surges. You know, everyone was sort of bewildered on how do we deal with this.

But the only thing you can do is sort of get buses lined up, and you had people sit in every other seat, which basically took away from those people that were dealing with transportation barriers. But yet, at the same time, they had to do something. So they lined up quite a few buses. My wife, she also worked for the Port Arthur Transit, Marie Kelley, and she worked very diligently over time, under time, and to get people lined up, to get people the information they needed. And they had to work well into about 3:00 a.m. or 4:00 a.m. in the morning just answering phones to get all the people that needed rides situated. And they still fell short because there wasn’t enough transportation, because of the situation where they had to separate people.

AMY GOODMAN: And, of course, you’re largely talking about these areas that are overwhelmingly communities of color. Can you talk about the oil industry, the largest refinery in the world there, when you have this kind of hurricane, the combination of the hurricane, the climate crisis and the extreme heat and now a fire?

HILTON KELLEY: Well, when you add it all up, and to add insult to injury, whenever you have a huge storm coming at an industrial community like Port Arthur, Texas, and the Orange, Texas, area, what you find is that many of these industries go into shutdown mode. And whenever they go into shutdown mode, that means they can’t process the oil and make all the products that they ordinarily make. And much of the product that’s left in the pipeline have to be sent to the flares and actually burned, along with a lot of the gases that build up.

So, what you see coming off of the smokestacks or the derricks is these huge, huge plumes of black smoke and soot. And much of it is contaminated with benzene. Much of it is contaminated with sulfur and other toxins that are not being processed, also volatile organic compounds. And so people are ingesting all of these dangerous toxins and at the same time dealing with COVID-19 and the extreme heat. It really exacerbates the respiratory system and also the immune system, making us more prone to be affected by COVID-19.

AMY GOODMAN: Can you talk about the connection between the climate crisis and environmental racism, Hilton Kelley?

It’s time that we do more to assist the world with ending climate change. It’s time for the United States to get back into the Paris Agreement. And I think Trump, instead of rolling back some of these Clean Air Act laws and regulations, we should be looking at ways in which we can place more regulations to ensure the safety of our citizens, not only on the Gulf Coast, but across this country. It’s time that we stand together, and it’s time that all citizens realize that it’s up to us to make sure that our environment is safe and clean for all citizens.

AMY GOODMAN: Hilton Kelley, I want to thank you so much for being with us, winner of the Goldman Environmental Prize, executive director of the Community In-Power and Development Association. Thank you so much. 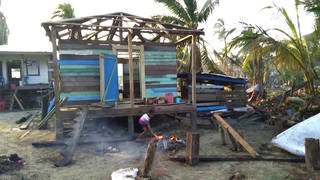