The House of Representatives has voted to impeach President Donald Trump for inciting an insurrection at the U.S. Capitol in a bid to overturn Joe Biden’s Electoral College victory, and Trump will end his term in office with the distinction of being the first U.S. president to be impeached twice. Ten Republicans joined Democrats in the 232-197 vote to impeach, and Trump now faces a trial in the Senate. Constitutional attorney John Bonifaz says the House “did its duty” and that the Senate must move quickly to take up impeachment proceedings. “Those who did not vote to convict last time are responsible, in part, for allowing this president to stay in office, someone who has clearly abused his power time and time again, leading to this violent attack on the U.S. Capitol,” says Bonifaz, co-founder and president of Free Speech for People.

AMY GOODMAN: The House of Representatives has voted to impeach President Donald Trump for inciting an insurrection at the U.S. Capitol in a bid to overturn Joe Biden’s Electoral College victory, making Trump the first U.S. president to be impeached twice. Wednesday’s vote was 232 to 197, with 10 Republicans joining Democrats. It’s the most bipartisan impeachment in history.

It was one week ago today, the morning after the insurrection, that Congressmember Ilhan Omar of Minnesota, a former refugee, the first Somali American to serve in Congress and also the first to wear a hijab in U.S. Congress, first unveiled a resolution to impeach Trump. During Wednesday’s proceedings, she called Trump a “tyrant.”

REP. ILHAN OMAR: Let us not mince words about what happened last week. It was a violent attempt to interrupt our democratic process. It was a targeted blow at the most essential process that makes us a democracy. It was a direct and specifically incited by the president of the United States. For years, we have been asked to turn a blind eye to the criminality, corruption and blatant disregard to the rule of law by the tyrant president we have in the White House. We, as a nation, can no longer look away.

AMY GOODMAN: In 2019, President Trump was also impeached by the House for abuse of power and obstruction of Congress. This is Democratic Congresswoman Diana DeGette of Colorado, who [is serving] as an impeachment manager […] this year, speaking on Wednesday..

REP. DIANA DEGETTE: Just over a year ago, I stood right there, where you’re standing today, as we took the solemn step of impeaching the president of the United States for pressuring a foreign leader to take unlawful actions to help him in his reelection. And now, just one week ago, almost to the hour, I laid right there, on the floor of the gallery above us. I heard gunshots in the speaker’s lobby. I heard the mob pounding on the door. And what they were trying to do, they were all an angry mob, incited by the president, trying to stop certification of a legitimate election. It’s clear the president learned nothing in the last year. Yesterday, the president said again he did nothing wrong. This man is dangerous. He has defied the Constitution. He has incited sedition. And he must be removed.

AMY GOODMAN: President Trump now faces an impeachment trial in the Senate, which Republican leader Mitch McConnell has adjourned until January 19th, making it unlikely the trial will take place before Joe Biden is inaugurated.

For more, we’re joined by John Bonifaz, co-founder and president of Free Speech for People, co-author of The Constitution Demands It: The Case for the Impeachment of Donald Trump.

John, welcome back to Democracy Now! Can you talk about the significance of this second impeachment of Donald Trump and what it means and what will happen in the Senate?

JOHN BONIFAZ: Thank you, Amy, for having me.

This is a significant, historic vote. The House of Representatives did its duty to pass this article of impeachment against Donald Trump for inciting insurrection, a violent, seditious attack on the U.S. Capitol to overthrow constitutional government. And as Speaker Pelosi said, he is a clear and present danger to the nation. He must be removed immediately. So, we do not accept the idea that Senator McConnell has put forward, that somehow the Senate cannot act immediately to hold this impeachment trial and convict and remove him. There is a procedure for enacting emergency rules to reconvene the U.S. Senate, and Senator McConnell ought to do that.

The fact of the matter is that members of the Republican-led Senate are responsible. Those who did not vote to convict last time are responsible, in part, for allowing this president to stay in office, someone who has clearly abused his power time and time again, leading to this violent attack on the U.S. Capitol just last week.

NERMEEN SHAIKH: Well, John Bonifaz, I mean, it seems that McConnell is not likely to reconvene the Senate. Could you talk about what the significance and the effects, consequences, would be of impeaching a president, carrying out a trial in the Senate for a former president? What would be the consequences of that?

JOHN BONIFAZ: Well, the consequences are that there is a basis for disqualifying a member of the public who has held public office before and has been convicted from ever running for office and holding office again. And that disqualification has to happen here. Not only should he be convicted for having engaged in this insurrection, inciting this insurrection, but he should be barred from ever holding future federal office. And that can happen even if he has already left office. And that’s significant because, of course, the president has said that he intends to consider running for office again, has suggested that he might run in 2024. And there’s no basis for him to be able to hold office again if he’s convicted. And, in fact, the 14th Amendment, Section 3, makes clear that anyone who is engaged in insurrection or rebellion against the United States may not hold public office in the future.

NERMEEN SHAIKH: Well, could you elaborate on that, John, the Section 3 of the 14th Amendment? In a recent piece in The Washington Post, American historian Eric Foner advocated invoking that section, Section 3 of the 14th Amendment, as a more expeditious way of getting rid of Trump and also a more appropriate one. He wrote — and I’ll just quote ver briefly — that “Invoking a constitutional provision meant to limit the political power of Confederate leaders would mark an appropriate end to the career of a president who so closely identified himself with the memory of the Confederacy and with a culture of White resentment.” John Bonifaz?

JOHN BONIFAZ: I agree. I agree with Eric Foner and, in fact, you know, with respect to invoking this provision of the 14th Amendment. And, in fact, that provision is cited in the article of impeachment that the House of Representatives passed yesterday.

But it doesn’t mean that we only do that. We have to proceed with this impeachment trial. This president must be held accountable for the charges that have now been issued by the U.S. House of Representatives for inciting insurrection. And impeachment means anything. It means that this president be held accountable for his crimes, his high crimes that he has committed. So, I think we ought to make sure that the Senate does its job, that it holds this impeachment trial immediately, that it convicts and removes this president from public office, while at the same time invoking that provision of the 14th Amendment.

And frankly, it ought to be invoked not only against the president, but against those members of Congress who participated in seeking to overthrow a free and fair election last November. Even after this violent attack on the U.S. Capitol, you had 140 members of the U.S. House, you had seven members of the U.S. Senate, voting, after that attack, to overthrow this free and fair election. They participated in helping to incite this insurrection. They participated in spreading the big lie that somehow this was a fraudulent election. It was not. And the idea that they get to stay in office after having participated in that action is antithetical to our democracy and to that provision of the 14th Amendment.

AMY GOODMAN: John Bonifaz, if President Trump were found guilty in the Senate, and there are serious questions of — with the crises that are being faced, from the economy and COVID, of course, to continue to deal with Donald Trump, it’s not automatic that he wouldn’t be able to run again. Is that right? It would have to be a sanction decided by the Senate, if they found him guilty.

JOHN BONIFAZ: That’s correct. And this has happened in prior impeachments of judges, where, following the conviction vote, there is another vote that is taken, and it only requires a simple majority of the Senate to disqualify the person from ever holding federal office again. And that’s what would have to happen here. First the Senate would have to hold this impeachment trial, convict the president — or, if he’s no longer president, the ex-president — and then pass, by simple majority vote, the disqualification. All of that can take place very quickly, and it should.

And honestly, again, Senator Schumer has called on Senator McConnell to invoke emergency rules to reconvene this Senate now, not to have it stay adjourned until January 19th. And the reason is that we know, as Congressman Jamin Raskin has said, that on right-wing militia sites there are statements being made, discussions of another attack on Washington leading up to the inauguration. And this president has incited all that. And he ought to be held accountable, and he ought not to be in public office any longer.

AMY GOODMAN: John Bonifaz, we want to thank you for being with us, president of Free Speech for People, co-author of The Constitution Demands It: The Case for the Impeachment of Donald Trump.

Next up, Keeanga-Yamahtta Taylor, Princeton University professor, on “The Bitter Fruits of Trump’s White-Power Presidency.” Stay with us. 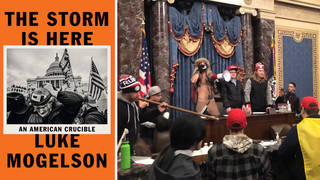