After President Joe Biden issued an executive order on his first day in office canceling the Keystone XL pipeline, pressure is growing from Indigenous leaders and environmental groups for the new administration to do the same with the Dakota Access pipeline, the controversial project that sparked the historic Standing Rock uprising in 2016. “The pipeline is illegal,” says Jodi Archambault, a citizen of the Standing Rock Sioux Tribe and former special assistant to President Barack Obama on Native American affairs. “The best thing that he can do is drop the appeals to this and stop the oil from flowing now.” We also speak with Alex White Plume, a former vice president and president of the Oglala Sioux Tribe of the Pine Ridge Reservation, whose late wife Debra White Plume was a key organizer at Standing Rock.

On his first day in office, President Joe Biden issued an executive order to shut down the Keystone XL pipeline. Indigenous and climate justice groups are now urging him to do the same with the Dakota Access pipeline. DAPL transports 500,000 barrels of crude oil each day.

Still with us, Jodi Archambault, citizen of Standing Rock Sioux Tribe, former special assistant to President Obama for Native American affairs for the White House Domestic Policy Council. Also with us, Alex White Plume, former vice president and president of the Oglala Sioux Tribe of the Pine Ridge Reservation, a Lakota interpreter, who just lost his wife, Deb White Plume, who we’re going to learn about.

Jodi Archambault, can you talk about this distinction, why you understand Keystone XL was stopped, but not Dakota Access pipeline, and what your demands are?

JODI ARCHAMBAULT: I don’t understand the distinction that the Biden administration is making, because the pipeline is illegal. Dakota Access pipeline is an illegal pipeline. It was stated in the lower — the D.C. district court that it violated NEPA. And the easement was revoked. And so, basically, the Energy Transfer Partners and the Dakota Access pipeline, they are trespassing. They’re encroaching on federal lands right now. Joe Biden, President Biden, has the discretion to comply with the law, which is NEPA. He has the grounds to make this decision, and it’s not that hard. He has a lot of — if he’s worried about the legality of it, he’s covered, because this has been litigated. The best thing that he can do is drop the appeals to this and stop the oil from flowing now.

AMY GOODMAN: I wanted to now bring back in Alex White Plume to ask about your wife and her legacy, Lakota water and land defender Debra White Plume, who passed away this past November, born and raised in Pine Ridge Reservation, South Dakota. She helped lead the fight against fossil fuel extraction and oil and gas pipelines. In 2016, we spoke with her at a protest camp in the Standing Rock Reservation in North Dakota, where she joined water defenders fighting the Dakota Access pipeline. This is some of what she said.

DEBRA WHITE PLUME: If the pipeline is put in, it’s going to leak or spill or burst or explode, and that oil is going to get into the water. And Dakota Access pipeline says they’re going to bury it 30 feet under, and they’re assuring everybody that it’s going to be safe. But I think Western science doesn’t really know everything it thinks it knows. And we need to make our decisions based on what’s best for Mother Earth and our coming generations. And that includes protecting our water. Water is under threat all over the world. Right now there are people who have no access to clean drinking water.

AMY GOODMAN: That’s Debra White Plume. We met her at the Standing Rock Reservation. Alex White Plume of the Oglala Sioux Tribe, can you talk about her commitment to stopping the Dakota Access pipeline?

AMY GOODMAN: I’m so sorry on your loss, Alex. It’s hard for me to — I know to play the video, you relive your wife.

ALEX WHITE PLUME: I think — well, I remember a time when she said, “White Plume, come in here. I want to talk to you about something serious.” So, I was outside working on the yard, and I came in. And she says, “You know I’m in a fight against cancer. These mining companies are destroying our water. And I developed a plan. It’s going to take me 25 years to take on the largest uranium mining company in the world” — which was Cameco Incorporated — “and to have a mining company at Crow Butte, Nebraska, just 20 miles from our border.” And she says, “Can I have you support me? I need you to stand by me. This is going to be a long fight.” And so, I agreed, naturally.

And so, what she did was she’d done a lot of research, and she attacked them where they were the weakest. And that is the permitting process. She didn’t just say, “We’re going to go out and fight the mining company and go rabble-rouse and everything.” She’d done studies, and she found out where they were going to apply in their permitting. So, it took her 25 years, but she shut down the uranium mine.

Well, about 10 years before, KXL pipeline was coming down. They were also going through the —

But thank you very much for having me on here.

AMY GOODMAN: Jodi Archambault, can you tell us if the Biden administration is weighing now what to do with DAPL? 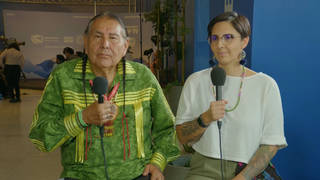