Workers at the Hunts Point Produce Market in New York City have overwhelmingly approved a new three-year contract, ending a week-long strike that captured national attention and galvanized the community behind the essential workers at the Bronx-based business. Some 1,400 members of the Teamsters Local 202 union walked off the job on January 17, demanding a $1 raise and recognition for their work to keep New Yorkers fed during the pandemic, with the Hunts Point Market supplying about 60% of the city’s produce. Management had offered a 32-cent raise instead. But after a week on the picket line and widespread support from the community, workers won raises of $1.85 per hour over three years, as well as improved terms for family health benefits. “They were resolved with each other, and they were standing shoulder to shoulder with each other on the basic premise of being treated decently,” Daniel Kane, president of Teamsters Local 202, says of the workers’ job action. “They fought, and they came away with their dignity.”

AMY GOODMAN: We turn now to look at how over 1,400 essential workers at the largest wholesale produce market in the country won a major victory this weekend after going on strike for nearly week to demand better wages. Before the strike, workers at the Hunts Point Produce Market in the Bronx, here in New York, tried to negotiate with management for a $1-an-hour raise, after keeping the New York City region’s food supply going through the pandemic. They voted to end their strike Saturday after approving a new contract that includes a $1.85 wage increase over three years. This is a striking worker named Hector.

HECTOR: The seven years that I’ve been here, going on eight, I’ve basically felt unappreciated, with supervisors, the way they treat their men, and just with the money situation, as well. Like, we deserve more, and we’re only getting $2 more than minimum wage. And for us to get more money, we have to go to nights. And when you go to nights, you’ve got no life, and you can’t, basically, spend time with your family.

AMY GOODMAN: The victory for the Hunts Point workers comes after an outpouring of solidarity. New York Congressmember Alexandria Ocasio-Cortez skipped President Biden’s inauguration to join the striking workers on their picket line.

Welcome to Democracy Now! It’s great to have you with us. Congratulations on your victory. Can you talk about how you achieved it, what exactly you won this Saturday?

DANIEL KANE: You know, during the strike, about midway through, when — I saw the solidarity, the people, the workers, engaged in a struggle that was obviously harrowing to them, because their livelihoods were on the line, but they were resolved with each other, and they were standing shoulder to shoulder with each other on the basic premise of being treated decently. And I said to them — I said, “No matter what, at the end, we won already, because we fought.”

And that’s the issue. The issue is, I think, that workers — somebody asked me, “Why is it different during the pandemic?” I said, “Well, these workers were always essential. But in our nation, people have been looking past people who do things for them, who actually provide services.” Essential workers, by definition, can’t phone it in. They can’t do what you and I are doing right now. They have to show up. They have to be there. And they provide these kinds of things, like essential things, like medical assistance, feeding us, doing all the stuff that we sort of forget about.

I started here many, many years ago working on the loading docks here at Hunts Point. And I always knew that these folks were special. And they fought, and they came away with their dignity. You know, we use the highlight of the $1-an-hour campaign, as most of the workers — you know, I was listening to Reverend Barber, and he’s right. Most of the workers aren’t even close to $25 an hour. Even the Teamsters union, which has negotiated tremendous contracts, most of our members make between $16 and $22, $23 an hour. And they have good health insurance, and we fight for all those things. But I don’t think the rest of the country realizes that, like, a dollar raise, most Americans never get. They might not get that over three years. So, we’re using that to highlight it for the outside world, for those that are not involved in this type of work.

AMY GOODMAN: I wanted to turn to Leonardo Servedio, vice president of Teamsters Local 202, who described the moment of solidarity last week between Teamsters turning back 21 train cars of merchandise from their Hunts Point Market strike line.

LEONARDO SERVEDIO: As of 7:35 p.m. tonight, CSX tried to deliver 21 freight cars of merchandise into the Hunts Point Market. Our guys, our captains, our union guys, came there, asked them to support our union. The locomotive engineer came out and saw them, said, “We’re Teamsters, too,” turned the freight car right back around, headed back to Ohio.

AMY GOODMAN: So, Daniel Kane, explain exactly what you got, and what lesson you think that people can take, not only around the country, but in other parts of the world.

DANIEL KANE: Yeah. Look, what we got was a decent and fair wage increase. And, you know, we represent working-class people. So, in my mind, it’s never enough that workers — I mean, workers are always battling in this society to get what’s just and fair. We were able to save our healthcare system. We have a pension plan. We have a night differential. All these things are fought for over the last 50, 60 years, long before I was here. Our contract had basic tenets in it, like an eight-hour day. We get overtime after eight. All these things were on the line in this strike, like we have a regular workweek.

Our members can — I’ll give you an example. One of the members said to me — he said, “Danny, you know, with my overtime, I made $64,000 last year.” He goes, “That’s twice the wages my father ever earned.” This type of work, when it’s represented — and they work hard, and they earn every dollar of it. But that’s not too much to ask for a worker who’s put up with a 10-, 12-hour day to feed their families.

AMY GOODMAN: So, can you talk about the importance of Hunts Point, especially for people who don’t live in this area?

So, it’s a very unique place. It was built in the '60s by a public-private partnership. The government built it. It's on city land. It should provide decent jobs. It’s a place of hope. And it does provide hope for these workers and for the city. And it provides [inaudible] —

AMY GOODMAN: And how the workers fare during the pandemic, I mean, getting food to people all over this region, risking their own lives?

DANIEL KANE: Yes. I mean, the pandemic really put it on everybody, meaning they were nervous about coming to work, because, obviously, like all of us, we’re worried about getting sick. We don’t want to infect our families. Yet the work that we do is very — is essential, in that we want to make sure that people understand that they don’t have to worry during a pandemic, that you’re going to have food. The food service will continue. So we took that very seriously, and our members did, even though it was harrowing. It was very — they’re scared to come to work, but they knew that it was important that the rest of the people weren’t scared that they weren’t going to be able to eat.

AMY GOODMAN: Daniel Kane, as Bernie Sanders was going viral with his Vermont mittens, he tweeted, “Essential workers should not have to go on strike for decent pay.”

DANIEL KANE: Bernie is right. And I was listening to Reverend Barber. They’re both right.

What we wanted to highlight in this strike was not only our plight, but that most of the workers, the essential workers that people pass by every day, providing the services for all the rest of the folks, are not getting a fair deal in this society. They’re making farmers — they’re making $14, $13, $12 — in other states, $7. The better-paid jobs are getting $18, $19, $20, $21, $22. And none of those folks — a dollar to some people seems not much. But I can count on my hands how many times a worker who makes less than $25 an hour, which is the vast majority of the people in this country, received a $1-an-hour wage [increase]. It doesn’t happen.

AMY GOODMAN: We just have 10 seconds. As essential workers, are people at Hunts Point — are they prioritized for a vaccine?

DANIEL KANE: Yeah, they are now. We’re, like, in the second phase, according to the guidelines, as essential work. And it’s supposed to be rolling out soon.

AMY GOODMAN: Well, I want to thank you for being with us, Daniel Kane, president of Teamsters Local 202, which organized the nearly week-long Hunts Point Market strike that ended in victory this weekend. That does it for our show. I’m Amy Goodman. Remember, wearing a mask is an act of love. 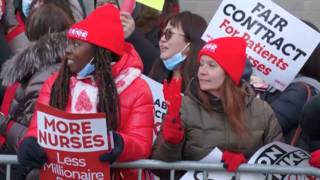