MIA: Where Have All the Vaccines Gone? CDC Says Only Half of Shots Feds Sent to States Were Used

January has become the deadliest month of the pandemic in the United States, with at least 80,000 deaths from COVID-19 so far, and public health experts worry new, more contagious variants of the coronavirus could make things worse. President Joe Biden has announced plans to acquire another 200 million doses of COVID-19 vaccines, aiming to vaccinate most people in the U.S. by summer, but vaccine distribution continues to be a problem. The Daily Beast reports that of the 41 million vaccine doses handed out to states, fewer than 22 million have been administered. Meanwhile, many states report running out of vaccines. “States are telling federal officials that they believe millions of doses are lost in the distribution system,” says reporter Erin Banco. “What the Biden team is trying to do now is sort of do an accounting exercise to figure out where these vaccine doses are located.”

January has become the deadliest month of the pandemic so far, with at least 80,000 deaths in the United States. And the month is not over. The United States has about a fifth of the deaths and infections in the world.

On Tuesday, President Biden announced plans to acquire another 200 million doses of COVID-19 vaccines, with a goal of vaccinating most people in the country by summer. But the Biden White House is facing a crisis, after the Trump administration left no plan for distributing vaccines.

In addition, millions of vaccine dosages have apparently gone missing? The Daily Beast reports about 41 million doses have been handed out to states, but less than 22 million have been administered. This is based on data from the Centers for Disease Control. Meanwhile, many states report running out of vaccines. White House Press Secretary Jen Psaki addressed the issue Tuesday.

PRESS SECRETARY JEN PSAKI: Our team is working right now. We’ve been here for five days to evaluate the supply, so that we can release the maximum amount while also ensuring that everyone can get the second dose on the FDA-recommended schedule.

So, the confusion around this issue, which we acknowledge there is some confusion, is — speaks to a larger problem, which is what we’re inheriting from the prior administration, which is much worse than we could have imagined. So we are assessing now what we have access to and ensuring that we have more of a rapid engagement with states so that they have more of a heads-up on what to expect in the weeks ahead.

Erin, this is an astounding story. It’s not that the U.S. doesn’t have enough vaccines. We’re talking about 20 million vaccines. You have in New York City the canceling of appointments by various hospitals and other places because they just don’t have the vaccines, and that’s just one city in this country. Where have all the vaccines gone?

ERIN BANCO: Hi there. Thanks for having me.

Yeah, this is an incredible moment that we’re in right now. The Biden team has been working really overtime over the last several days to try to figure out why states are reporting shortages while also reporting that their vaccination rates are quite low. So, the CDC’s federal tracker, vaccine tracker, says that about 40 million doses of the COVID-19 vaccine have been distributed to states, but, as you pointed out, only about 20 million of those doses have been administered. That’s a huge gap. Now, some of that gap might be attributed to states holding second dose reserves, doses that are being allocated or earmarked for the federal long-term care facility vaccination program. But apart from those sort of anecdotes of reserve holding and the long-term care facility program, states are telling federal officials that they believe millions of doses are sort of lost in the distribution system, whether they be in warehouses or refrigerators at main distribution hubs.

And so, what the Biden team is trying to do now is sort of do an accounting exercise to figure out where these vaccine doses are located, whether they’re still good, whether they’re expired, or whether they can be put in people’s arms, and how to get them to where they need to be going.

Now, states are saying we have shortages. I talked to a couple of state officials over the past few days who say the demand for the vaccine spiked in recent weeks. They’ve scheduled tens of thousands of appointments, and they just simply do not have enough supply to fill that demand. But the federal government’s problem is, well, you still have vaccine doses out there, according to our data. So where are these doses?

JUAN GONZÁLEZ: And, Erin, what about the potential for an already existing black market? Because, you know, I’ve become increasingly convinced that this is going to become one of the biggest scandals of this entire pandemic, is the distribution of these vaccines, because, clearly, there is a market for these vaccines out there, and people who are wealthy enough or who have the connections can potentially feed a black market in them. Are there any indications that that’s already happened? There’s clearly indications that, with those who have received the vaccines — because I know of personal examples of people who have exaggerated their underlying conditions in order to get to the front of the line, situations of abusing the essential worker designation in order to get to the front of the line. But of the missing vaccines, do you see any indications of siphoning off supplies illegally?

ERIN BANCO: I do not have any anecdotal or concrete evidence that these vaccines are being, quote-unquote, “stolen” or that there’s a black market that exists. But I think you’re right. I think we’ve been hearing — you know, I personally have been hearing a lot of stories about residents in New York who are calling into Jersey City vaccination centers, saying — inflating their comorbidity status and getting in across state lines to get vaccines; other instances out West, where wealthy hospital donors are jumping the line to get the vaccine.

But I think what all of this tells us is that a couple of weeks ago, the Trump administration, in line with the Biden team, transition team, decided to widen the pool of who could qualify to get this vaccine. Part of the fear internally within the Trump administration was that the vaccine rates were super low, and they were afraid of the slow uptake. So, as a way to remedy that, they decided to widen the pool of who could sign up and get the vaccine. Now, that almost sort of worked too well, because we’re at a point now where demand is super high in a lot of states. And states simply just don’t have the infrastructure, the staff or the ability to administer those doses quickly. And they’re also saying we have shortages.

So, I think the black market issue is less apparent right now. I think what’s really happening on a state level is basic accounting problems for where these vaccines have gone and why — the question is: Why can’t we get these into people’s arms more quickly? And, you know, it’s a supply chain issue. And there are sort of different problems at every step of the supply chain. And those problems look different from state to state. So, for the federal government, the question is: How do we get our hands around this problem, and how do we come up with a national plan that encapsulates all these different anecdotal issues that we’re hearing about across the country?

JUAN GONZÁLEZ: And what about this tracking system that the federal government has? I mean, in a world where Google knows exactly where every individual is based on their smartphone and their GPS, what is the tracking system that the federal government is using? Is it relying on the states, once the doses are delivered, to let them know what’s happened, or is it continuing to track the vaccine shipments?

AMY GOODMAN: Erin, we have 20 seconds.

ERIN BANCO: — data from Tiberius, which is the Pentagon tracking system. But there are lags in reporting, and the data that they’re looking at is just not reliable enough to understand what the issue is. And so that’s what they’re working on now: How do we get better data so we can diagnose the issue?

AMY GOODMAN: Erin Banco, we want to thank you so much for being with us. And we will link to your piece, “Millions of Vaccine Doses Are M.I.A. — and Feds Aren’t Sure Why.” I’m Amy Goodman, with Juan González. Wear a mask. Stay safe. 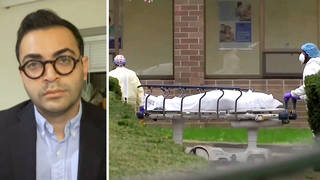