New York City taxi drivers have entered their second week of hunger striking outside City Hall to demand that the mayor grant debt relief for thousands of drivers impacted by the taxi medallion price crash. Many drivers purchased taxi medallions, the permits required to drive a taxi, for upwards of $1 million. After the incursion of ride-sharing apps like Uber and Lyft, as well as more recent plummeting demand for taxis due to the pandemic, they are now only worth about $100,000. Faced with massive debt and financial ruin, at least nine drivers have died by suicide. Taxi driver Augustine Tang, who has been on hunger strike for six days and personally knew one of the drivers who committed suicide, says that he is striking for medallion owners who “went into financial ruin” and saw that “there was no way out.” We also speak with Zohran Mamdani, a New York state assemblymember who joined drivers in the hunger strike. Mamdani says, “It’s important for us as legislators to bring to light what it is that people are suffering from out of view of those in the political elite.”

A group of New York City taxi drivers and allies have entered their second week on hunger strike to demand New York City enact debt relief for thousands of drivers. Many taxi drivers are facing economic devastation after buying taxi medallions from the city at artificially inflated costs. In 2014, the price of medallions soared to around $1 million. Today they’re worth maybe $100,000, leaving drivers in massive debt and financial ruin. At least nine drivers have died by suicide. To compound the problem, taxi ridership has also plummeted in New York due to the pandemic and the rise of ride-sharing apps like Uber and Lyft.

Augustine, let’s begin with you. As you sit in your cab, can you talk about why you went on hunger strike and the kind of devastation you have faced?

AUGUSTINE TANG: Well, I’ve been on hunger strike before the 6,000 families that has been affected by this medallion crisis. These men and women have invested in the city and drove 20, 30, 40 years of their lives, just to have their retirement taken away from them and also having – about to lose their homes and their jobs, as well, too.

AMY GOODMAN: And, Zohran Mamdani, you’re a state legislator in New York. Why are you participating in this hunger strike?

ZOHRAN MAMDANI: I’m participating in solidarity with the Taxi Worker Alliance and to try and bring to light what the consequences are of the city’s inaction for many years and now their completely insufficient plan for debt relief, because, you know, it is — we started this hunger strike last Wednesday. We’ve now completed seven full days of being without food, one of the most basic elements of dignity. And the consequences we have seen in our own bodies — you know, an inability to sleep, unrelenting hunger, moments of blurred vision, stress, headaches — these are the same consequences that I heard drivers talk about when they say what the physical realities are of being hundreds of thousands of dollars in debt, unable to take care of your family and seeing no way out. So, it’s important for us as legislators to bring to light what it is that people are suffering from out of view of those in the political elite, and bring it right front and center in front of City Hall.

ZOHRAN MAMDANI: As of now, we haven’t had any direct contact from the mayor. And that’s despite my many, many requests personally to his staff at City Hall, as well as the very public requests from myself and from the union. But we do hear his responses to questions from the media. And thus far, his stance has still been one of defending a plan which no other elected official will publicly defend.

AMY GOODMAN: Augustine Tang, if you can talk about the deaths by suicide of taxi drivers, as you sit there in your car on day six of your hunger strike? And also, talk about how you got this taxicab that you’re sitting in.

AUGUSTINE TANG: Of course. Well, I started — when I first started driving, I inherited the medallion from my father, who passed away in 2015, and also a $530,000 debt, unfortunately. I had to make a decision to take care of my grandmother, his mother, and I made that decision to move back with her and try to carry on his legacy.

And when I first started, I had met a fellow taxi driver and medallion owner that — his name was Kenny Chow. And, unfortunately, he was one of the nine drivers that died by suicide. And, you know, for me, ever since then, I’ve been actively trying to speak up about this issue and trying to do as much as I can, because I don’t feel like any driver should feel that way ever again. It’s incredibly sad. And the longer I do this, the sadder the stories have become about these medallion drivers — medallion owners, that have just went into financial ruin, and, really, there was no way out.

AMY GOODMAN: Zohran Mamdani, explain how the system worked, how a medallion, worth a few years ago supposedly a million dollars, is now worth maybe $100,000, and the role of the apps Uber and Lyft.

ZOHRAN MAMDANI: Absolutely. So, the medallion, for decades, has been worth between, let’s say, $130,000 to $200,000. The medallion system, for those who don’t know, is the licensing by which cabs are allowed to pick up passengers from across the five boroughs. And this was created in the early 20th century.

The medallion prices started to increase when the Bloomberg administration came into power in 2001 and saw that the city had a $3.1 billion deficit. They pinpointed medallions as a means of making up that revenue, and, over the next decade and some change, made $855 million off of the sale of new medallions, as well as a processing fee they added to all sales of 5%. So, if you bought a medallion for a million dollars, that was an additional $50,000 you would have to pay to New York City. Then, as this price increased because of the need to seek revenue from it, they artificially inflated it, and they did so knowingly, because there was a memo within city agencies that said that the price of the medallion was outstripping its actual worth, because we went from about $200,000 to, as you said, a million dollars, and nothing about the market was fundamentally changing. So the city knew that these drivers simply could not afford the loan terms that they were agreeing to when they put a million dollars down to drive a yellow cab.

And then, as we got into 2012, 2013, 2014, and it became the de Blasio administration, we had the mayoralty allow for Lyft, Uber and ride-share companies, in general, to flood the market, when so much of the worth of the medallion and the ability of these drivers to make a decent living was predicated on the fact that they had an exclusive license to operate as taxis. And now you had 100,000 additional cars operating in that same market. And studies have shown that taxi drivers have lost north of 40% of their income, with inflation accounted for, because of that.

And so, that’s where the city’s culpability comes from. It’s from the fact that they artificially inflated these medallions, that they let Lyft and Uber come into this market, and that they welcomed in lenders, which had been barred from operating in the housing market post-2008, to operate in this medallion market, trapping immigrant drivers in predatory debt agreements.

AMY GOODMAN: Finally, Augustine, can you lay out your day, before the hunger strike, how long you have to work in your car, the example — you’re one example of so many in New York City — and what this means?

AUGUSTINE TANG: Of course. Well, to be honest, driving in the city is not easy, especially with the influx of taxis. And many of us have to drive at least 10 to 12 hours a day, six days a week, in order to manage these medallions. My loan itself is $2,851 before the pandemic. And operating costs of a taxi — you’re talking about maintenance, you’re talking about gas, just credit card fees and surcharges — it amounts to a lot. And it’s difficult to make ends meet. Even having a second driver, you’ll have things like workers’ comp and insurance and things. And it’s incredibly tough driving in a city like New York City. And I’ve got to say, it’s — I give it to the people who’ve been doing it for 20, 30, 40 years. It’s incredibly hard on the body. It’s a very unhealthy job. But for those who wanted to provide for their family, they —

AUGUSTINE TANG: Right, exactly, especially for our senior drivers. Of course, COVID really changed a lot of things, because the senior drivers, you know, didn’t want to take that risk and bring it back to their family or even just get COVID themselves.

AMY GOODMAN: What are your final words to the mayor today?

AUGUSTINE TANG: Well, to the mayor, I tell him to come down to City Hall, over here on Broadway and Murray. For many of us, we have been out here for 39 days straight, 24/7. There has always been a taxi here, always been someone sleeping in their cars. For many of us, we’re tired, but we understand this fight. It’s more important than just a good night’s rest or food in my belly. We understand that this is worth it because of our futures.

AMY GOODMAN: Well, I want to thank you both for being with us. Augustine Tang, he’s a taxi driver here in New York on day six of a hunger strike; before that, a month-long vigil outside City Hall. And Zohran Mamdani, a New York assemblymember on day eight of his hunger strike, he is the son of the great filmmaker Mira Nair and the professor Mahmood Mamdani. We thank you both for being with us. 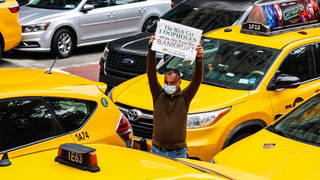