California Governor Gavin Newsom has declared a state of emergency after a devastating oil spill off the coast of Huntington Beach sent up to 144,000 gallons of crude oil into the Pacific Ocean. Investigators say a split in an underwater pipeline, likely damaged by a ship anchor, is the source of the oil spill. The pipeline owner, Texas-based Amplify Energy, didn’t report the leak until 12 hours after the Coast Guard was first notified, and beaches in the area are expected to be closed for months as crews race to minimize the environmental damage. “California’s offshore oil platforms are a ticking time bomb,” says Miyoko Sakashita, oceans program director at the Center for Biological Diversity. “It’s time to shut them down.”

AMY GOODMAN: This is Democracy Now!, democracynow.org, The War and Peace Report. I’m Amy Goodman, with Juan González, as we turn to California to look at this weekend’s devastating oil spill off the coast of Huntington Beach, about 30 miles south of Los Angeles. Authorities say as many as 144,000 gallons of oil have leaked from a pipeline connected to an offshore oil platform. The pipeline is owned by the Texas-based Amplify Energy, which didn’t report the leak until 12 hours after the Coast Guard was first notified. Investigators are looking into whether a ship anchor punctured the pipeline. California Governor Gavin Newsom has declared a state of emergency as cleanup crews race to minimize the environmental damage. Beaches in the area are expected to be closed for months.

We’re joined right now by Miyoko Sakashita. She is the oceans program director at the Center for Biological Diversity, joining us from Oakland, California.

Welcome to Democracy Now! It’s great to have you with us. Miyoko, you have been out there. If you look from Huntington Beach out to the sea, you see a number of oil wells. That one is even further out, that has caused this absolute catastrophe. Explain what you understand happened and what you feel needs to happen now.

MIYOKO SAKASHITA: Yes, this oil spill is just heartbreaking. And, you know, if I were to paint a broad picture, I think there are three key takeaways, that all point to ending offshore drilling off of California and everywhere. First, offshore drilling is just dirty and dangerous. There’s no safe way to do it. Here, you know, you look out at the ocean, and you see just miles of coastline that are oiled. The stench of petroleum is pervasive. And as you said, there are 144,000 gallons of oil that have poured out into the water. And this is more oil than the worst-case scenario discharge from that pipeline in the oil spill response plan.

Secondly, you know, there’s — the second lesson is there’s no way, it’s impossible, to clean up an oil spill. It’s just devastating. There are dead fish and birds washing ashore. And oil is really harmful for birds. They can’t fly. It destroys their insulation. They die of hypothermia. It’s poisoned fish and shellfish, and they’ve closed the fishing off the coast. And out at sea, whales and dolphins are swimming through it, and they’re breathing in the toxic vapors from the oil.

So, the third key takeaway is really that California’s offshore platforms are a ticking time bomb. So, whether it was this accident or another one, they were just waiting to happen. These oil platforms are more than 40 years old, and they’re old and decrepit. And it’s time to shut them down. They’ve outlived their intended lifespan. If you look at the 1978 environmental documents for these platforms, they were supposed to be decommissioned after 35 years. Yet they’re still lingering on and need to be closed down.

So, you know, broad picture, I think this all points to sounding the alarm for President Biden and Governor Newsom, that they need to stop issuing new drilling permits, and they should require all of the platforms off of California to get decommissioned.

JUAN GONZÁLEZ: And, Miyoko, how big is this problem? And when you talk about the platforms, I’m thinking not just of California, but obviously the Gulf of Mexico, where there are so many abandoned former drilling spots, that no one is thinking a hundred years down the pipe, 200 years down the pipe, what is going to happen to these capped wells or these lines. So, how extensive is the problem along California’s coast?

MIYOKO SAKASHITA: The problem along California’s coast is extensive. All of the platforms were built, you know, in the late '60s, ’70s, ’80s. They're old and decrepit. I actually, a few years ago, went on a fact-finding mission on a boat out to inspect the various platforms off of California. And so, we took Zodiacs out and went around, you know, platform Elly, the one that the pipeline is leaking from, and there’s a cluster of platforms there that we went around. And as you look at them, you can see visually that they’re rusted and that they’re aging. They’ve been battered by the sea and the waves and the weather. And so, you know, we went out there with thermal imaging cameras to spot methane leaks, and we did notice a lot of the platforms were flaring. And that’s only supposed to happen if there’s an accident or some sort of upset at the rig. And, you know, all these platforms looked like they should have been shut down long ago.

And I think you point to that there is a much broader issue here, which is we have offshore drilling platforms in the Gulf of Mexico, in Cook Inlet, Alaska, that are all facing this. And government reports recently have stated that a lot of the old pipelines out there have been sort of inadequately regulated and not decommissioned properly. So, there are a lot of risks out in our ocean. And they really point to the fact that we need to stop issuing new drilling permits and decommission a lot of the stuff that’s out there, to phase it out.

JUAN GONZÁLEZ: And are there any estimates of what the cleanup costs would be to remove the dangers from these platforms?

MIYOKO SAKASHITA: I’m not familiar with what the cleanup costs are. They will be expensive. But, you know, the truth is, is that the damage to our environment that they pose is so great that, at any cost, we really need to be looking towards our future and not risking another major catastrophe. You know, we had the BP oil spill in 2010, and I don’t think we learned the lesson that should have been learned then. Hopefully, you know, this Huntington Beach oil spill is another wake-up call that we really need to phase these things out.

It’s not only the oil that we can see that’s a spill risk and is devastating the coast, but also, every day, all of these drilling platforms are contributing to the climate crisis, and they’re taking us in the opposite direction. Both California and President Biden have climate goals that these are the opposite of. So, what they really need to do is figure out a plan for a just transition to phase out existing drilling and decommission all these ticking time bombs.

AMY GOODMAN: Miyoko Sakashita, we want to thank you for being with us, oceans program director at the Center for Biological Diversity.

Next up, Becoming Abolitionists: Police, Protests, and the Pursuit of Freedom. We’ll speak to author Derecka Purnell. Stay with us.

“Becoming Abolitionists”: Derecka Purnell on Why Police Reform Is Not Enough to Protect Black Lives

NEXT“Becoming Abolitionists”: Derecka Purnell on Why Police Reform Is Not Enough to Protect Black Lives 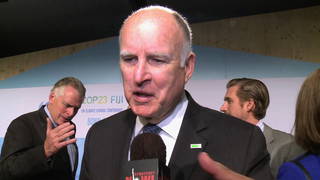