We look at how the fossil fuel industry is shaping children’s education in the United States. The Texas State Board of Education is set to vote on whether or not new science standards for middle schoolers should include climate change. The language they choose will ultimately dictate how textbooks nationwide address the issue. The board already watered down the standards after fierce lobbying by fossil fuel companies, despite urging from climate scientists that school curriculums should reflect how human activity, such as the release of greenhouse gases, has affected the climate. We speak with investigative reporter Katie Worth, who visited schools across the United States and found corporate and political interests are blocking the truth about the climate crisis from being taught in classrooms. Her new book is “Miseducation: How Climate Change Is Taught in America.” “There’s a long history of the fossil fuel industry trying to get their messages to children, because that shapes how future generations will think about their industry and how they will regulate their industry,” says Worth.

AMY GOODMAN: Speaking of education, we reported extensively this month on how students and young people led the push to address the climate crisis at the U.N. climate summit in Glasgow, where the largest contingent was fossil fuel lobbyists. Now we look at how the fossil fuel industry is actually shaping climate education here in the United States. In Texas, the State Board of Education is set to vote as soon as today on whether new science standards for middle schoolers should include climate change. The language they choose will ultimately dictate how textbooks nationwide address the issue. This week, the board watered down the standards after hearing from oil and gas lobbyists. This is member Pam Little.

PAM LITTLE: I would propose that we have 8(c) to say simply “discuss the pros and cons of all sources of energy.”

CHAIR: Do we have a second?

CHAIR: Motion of second. Do you want to speak to your motion?

AMY GOODMAN: Earlier this month, climate scientists across Texas sent a letter to the Texas State Board of Education urging them to revise the proposed curriculum to reflect how human activity, such as the release of greenhouse gases, has affected the climate.

For more, we’re joined in Dallas, Texas, by Katie Worth, an investigative reporter who visited schools across the United States and found corporate and political influences are interfering with students’ climate education. Her new book is just out this week. It’s titled Miseducation: How Climate Change Is Taught in America. She has a new piece out in The Washington Post headlined “Kids are living with climate catastrophe. That doesn’t mean they believe in it.”

Welcome to Democracy Now!, Katie. Congratulations on the publication of your book. Why don’t you start by talking about what’s happening where you are, in Texas?

KATIE WORTH: Yeah. So, this week, the State Board of Education is considering what should be in Texas standards about climate change. Standards are sort of arcane, but they are — ultimately, are kind of a state’s greatest lever of control over what is taught in their schools. So, for example, a standard is just — it’s like their expectation of what a child should learn in a given grade level, so like in third grade math they might learn multiplication tables.

So, what we saw this week is that for the first time they’re considering including climate change in their science standards. And that’s a big deal because, until recently in Texas, kids might not even hear the words “climate change” on school grounds unless they took like an advanced environmental science class. But since they were proposed, there have been a bunch of efforts to water down those standards. So, for example, a standard that said, you know, “describe efforts to mitigate climate change, including a reduction in greenhouse gas emissions,” was stricken and replaced with what you just heard on the tape.

AMY GOODMAN: And tell us more how it played out and what exactly might be voted on as early as today, Katie.

KATIE WORTH: Well, they’re going to be including some information about climate change, both about natural climate change and human-caused climate change. But again, the language has sort of been attenuated by board members who are very sympathetic to the fossil fuel industry, which, as we know, is very powerful here in Texas. So, for example, there was an effort to include the word “can” from the phrase “Describe how human activities can influence climate.” And some of the board members were saying, “Let’s just say, 'Human activities influence climate,'” because that is now an understood truth. But the other board members really wanted to keep that “can” in there, which, you know, it seems really subtle — right? — but they can have a powerful effect when it comes to how teachers teach it. And then, of course, textbook publishers are paying really close attention to these battles, to what happens in these hearings, because they then write that information into the textbooks that are sold all across the country.

AMY GOODMAN: I want to go right now to another clip in another state. This is a children’s storybook produced by the Oklahoma Energy Resource Board, a fossil fuel lobbying group. This one is called Petro Pete’s Big Bad Dream, when he has a nightmare about what life would be like if we didn’t have petroleum.

NARRATOR: Pete runs to the bathroom to brush his teeth and comb his hair for school, but his toothbrush and comb are missing. Pete shakes his head and doesn’t know what to do. “Pete!
You better hurry up! You don’t want to be late for school!” Pete’s mom yells from the kitchen. Pete heads outside in his pajamas to wait for the bus. As the sun comes up, Pete realizes the bus driver must have forgotten about him. He thinks about taking his bike, but the tires are missing. Pete decides that he has to walk to school.

AMY GOODMAN: So, climate miseducation is not just a problem in Texas, Katie Worth. You have traveled this country — I won’t ask you if you used fossil fuels — going to classrooms. But talk about both what’s happening here in Oklahoma with Petro Pete and around the country, what kids are learning.

KATIE WORTH: Yeah. Well, there’s a long history of the fossil fuel industry trying to get their messages to children, because that shapes how kind of future generations will think about their industry and how they will regulate their industry. And so, the latest iteration of this is, as you heard, you know, like getting to students through storybooks, through presentations, through field trips, through teacher trainings. That same state agency that created that storybook offers a training for teachers. If they come to a workshop that’s sponsored by the fossil fuel industry, they walk away with a tub of lab equipment worth $300 to $500, which is a really big deal in a place like Oklahoma, where education is really underfunded. So it’s pretty ubiquitous, and it’s also pretty insidious.

AMY GOODMAN: So, let’s go to your hometown of Chico, California, not far from the town of Paradise that was burned down in California’s deadliest wildfire. And talk about how climate change is being taught in Chico, where many climate refugees from Paradise now go to school.

KATIE WORTH: Yeah. Well, I had the opportunity — right after the megafire burned down Paradise, those schools were almost all displaced into Chico. And the Paradise Intermediate School was displaced into a hardware store, a shuttered hardware store, so basically like a Lowe’s. They turned aisles into classrooms. The checkout counters were where the lunch ladies served the meals. It was all very surreal, but the teachers and the kids made it work.

And I sat in on a classroom as a seventh grade science teacher was teaching the kids about climate change. It was a climate unit that he taught every year. And in the middle of that unit, one little boy raised his hand and said, “You know, hey, I’m confused. My parents say that climate change isn’t real, and so I don’t know what to believe.” And so, it just was pretty gutting. I mean, he was not the only kid in that class that felt that way. There were many. And so, you know, it’s just gutting to see that in this class of children who could legitimately be called climate refugees, because, as we know, these megafires are fueled by climate change, they were still getting climate denial messages from the adults in their lives.

AMY GOODMAN: As we wrap up, can you just tell us what kids in the Marshall Islands have to do with you deciding to write this book, Miseducation?

KATIE WORTH: Yeah, absolutely. So, I was a reporter for Frontline and a colleague and I were assigned a story in the Marshall Islands, which is famously endangered by sea level rise. And we went there, and we started talking to kids there, and we were just stunned by how fluent they were when they were talking about climate change. They could talk about the causes. They could talk about what it would mean for their own future in a way that felt much more informed than a lot of adults that I know can speak about it.

And so, you know, one of those kids that we were talking to, his family was at the time considering moving to Oklahoma, and in part because his parents wanted him to have — you know, make sure that their kids had a really great education. So, the question arose, “OK, well if these kids move to Oklahoma, what might they learn about climate change?” And as you heard with Petro Pete, they may not be learning anything about climate change, but they would almost certainly be getting messages from the fossil fuel industry.

AMY GOODMAN: Well, Katie Worth, I want to thank you so much for your work, investigative reporter. Congratulations on your book, out this week, Miseducation: How Climate Change Is Taught in America.

Next up, we go to British Columbia, where Canadian police have raided a First Nations blockade to prevent construction of a new pipeline on Indigenous lands. Stay with us. 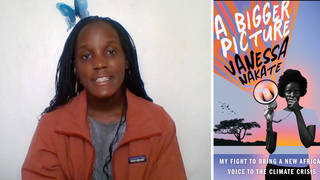