“She Should Be Found Guilty”: Ben Crump on Trial of Ex-Cop Kim Potter for Killing Daunte Wright

The former Minnesota police officer Kim Potter, who faces manslaughter charges for fatally shooting 20-year-old Black man Daunte Wright during a traffic stop, is expected to take the stand in her own defense Friday. Potter claims she reached for her Taser and drew a pistol by mistake. “Black people should not be killed in America over misdemeanor, pretextual traffic stops,” says Benjamin Crump, attorney for Wright’s family.

AMY GOODMAN: I want to go on to another case and then another one. I want to ask you about the Minnesota manslaughter trial of former Brooklyn Center police officer Kimberly Potter. Local media reports Potter is expected to take the stand in her own defense today, on the eighth day of testimony. The white woman is charged with first-degree and second-degree manslaughter in the killing of 20-year-old Black motorist Daunte Wright during a minor traffic stop in April. Bodycam video showed Potter pointing her 9-millimeter pistol at Wright, repeatedly shouting “Taser!” before firing a single bullet into Wright’s chest. Potter claims she drew the pistol by mistake. She’s a [26-year] police veteran who was training other officers when she shot Wright.

Just before Daunte was killed, he called his mother to say he was being pulled over, allegedly because an air freshener was obscuring his rearview mirror and for an expired registration tag. Katie Bryant, Wright’s mom, testified about this phone call in Kim Potter’s trial last week. She was the prosecution’s first witness.

KATIE BRYANT: He just sounded really nervous. But I reassured him that it would be OK.

AMY GOODMAN: The call ended. Katie Bryant later made a video call. A woman, likely Daunte Wright’s partner, Alayna Albrecht-Payton, who was in the car at the time of his killing, answered the phone.

KATIE BRYANT: She said that they shot him. And she faced the phone towards the driver’s seat, and my son was laying there. He was unresponsive, and he looked dead.

AMY GOODMAN: In the end, they ended up handcuffing Daunte Wright’s partner. The prosecution rested its case Thursday. One of its witnesses, Minnesota state investigator Sam McGinnis, testified this week that Potter failed to test her Taser as required on the day she fatally shot Wright. He also laid out the differences between a Glock pistol and a Taser.

SAM McGINNIS: The Taser is yellow; the firearm is black. The Taser has a stocky body to it compared to the Glock handgun. The grip of the Taser is shorter and wider than the Glock.

AMY GOODMAN: Meanwhile, Wednesday, use-of-force expert Seth Stoughton testified for the prosecution that Potter acted unreasonably in shooting Wright. He said, quote, “The use of deadly force was not appropriate. The evidence suggests a reasonable officer in Officer Potter’s position could not have believed it was proportional to the threat at the time,” he said. Stoughton is a professor at University of South Carolina School of Law who also testified for the prosecution at Chauvin’s trial. Ben Crump, your response to Kim Potter’s trial so far? What do you expect the outcome to be? You’re Daunte Wright’s family’s attorney.

BENJAMIN CRUMP: We expect that there will be accountability for another unjustified death of another young Black man. When you think about this excuse that it was an innocent mistake, it wasn’t innocent at all for her and the police officers to yet again have a pretextual stop of a minority in Minneapolis. We know that these pretextual stops, whether you say it’s an air freshener obscuring the view of the driver, whether you say it’s an expired registration — during the pandemic, where they have been given memos that they should not be stopping motorists for expired license plates because they were closed — which leads to them engaging in the most use of force.

She should be found guilty for two reasons, because they were violations of policy irrespective of her plea that it was an innocent mistake. Number one, you never should have violated your policy and used a Taser for a traffic stop. And they tried to offer this justification that, oh, she feared it was a life-or-death situation. But when we look at the video, we must remember, never was anybody in a life-or-death situation based on what we can see with our eyes. And everything that Daunte Wright was accused of was a misdemeanor. So, Black people should not be killed in America over misdemeanor pretextual traffic stops. Secondly, when she employed the Taser, she aimed it at his chest. That again was a violation of the policies of the Brooklyn Center Police Department. So she should be convicted on manslaughter, because she was reckless, she was flagrant, and she was reckless in following the policies that she had been trained on for 26 years. She was the training officer teaching rookie cops on how to interact with citizens. And there cannot be a different standard for when they interact with white citizens versus Black citizens.

We just had the guilty verdict and the plea in Derek Chauvin’s case, and I expect we should get a guilty verdict in Kim Potter’s case. But I will say this: These are great victories in the interest of justice, but at what cost? George Floyd and Daunte Wright should be living today, enjoying the holidays with their families. These young Black fathers have been taken from their children unjustly and unconstitutionally and unnecessarily.

AMY GOODMAN: And I just wanted to clarify, as you said, Kim Potter is a 26-year veteran, not 26-year-old police veteran, and she was training two other officers on the scene. It so much reminds me of the Philando Castile case, because you have a man who is stopped — I mean, remember, in this case, when we talk about air freshener hanging from the mirror, it’s those little Christmas tree-like air fresheners. That’s the kind of thing that we’re talking about, that so many people have. But Philando Castile, who’s shot, and his girlfriend, his partner, films him dying, and she ultimately is arrested, just as the partner of Daunte Wright is arrested. They spend more time arresting her than helping him.

BENJAMIN CRUMP: Yeah. And that’s the tragic circumstance. It seems to be that Black lives don’t matter in the moments when they are trying to justify killing another Black person. And you just see them start to conspire to try to cover up something they know is wrong. We have to continue to shine a light on this, because it’s happening far too often. Even in the aftermath of George Floyd, we continue to see these unjust killings all over America of unarmed Black people. 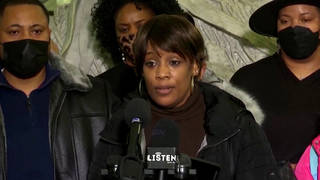