“Work Won’t Love You Back”: Sarah Jaffe on Toxic U.S. Work Culture & the Fight Against Inequality

Amid the economic crisis and precarious working conditions for millions of people during the pandemic, we look at a new book by Sarah Jaffe, an independent journalist and author who covers labor and economic justice. “Work Won’t Love You Back: How Devotion to Our Jobs Keeps Us Exploited, Exhausted, and Alone” looks at the unsustainable expectations of fulfillment around work and how the “labor of love” myth has contributed to the rise of toxic workplaces. Jaffe says the pandemic has shown that work can always get worse, and that more and more people are pushing back. “It’s not just that it’s a bad, grinding, slow, miserable job, but it’s also a bad, grinding, slow, miserable job that could kill you now.”

AMY GOODMAN: As Congress debates whether to raise the federal minimum wage to $15 an hour, fast-food workers in 15 cities held a Black History Month strike Tuesday as part of the Fight for 15 campaign and to emphasize the, quote, “crisis among Black communities who have faced generations of low pay and insufficient protections on the job.” These are some of their voices.

MARK LOGAN: Hi. My name is Mark Logan. I’m from Detroit, Michigan, a fast-food worker at McDonald’s. Minimum wage is $9.45. That’s not enough. I’m going on strike today for $15 an hour and a union job.

SYLCORIA CARROLL: My name is Sylcoria Carrroll. I’m a member of McDonald’s and a member of the NC Fight for 15. I’ve been in this organization for six years. I’m doing this because my kids need me. I’m pregnant with a baby on the way. It’s the third baby, and I already have two kids. I can’t take this no more. There was times when I didn’t have a break. I came in on my day off. And then my own manager didn’t tell me how much I’m getting paid an hour. The highest check I ever got was literally $291. I can’t take it no more. I’m halfway homeless. I need this $15 an hour, not only for me, but for everybody.

ERICA HUNT: I was 16 years old, first day working in fast food. Just like the young lady that spoke today, fresh on the job, I didn’t understand what was going on. … So I learned to put an armor on. I continued to smile and be friendly with my customers. And I teach the crew to put on the same armor that I wear. But this armor gets heavy, real heavy, when you can’t pay your bills.

For more on fast-food workers, teachers, nurses, gig workers, many others organizing to improve conditions, we’re joined by Sarah Jaffe, longtime labor, economic justice reporter, who writes about all of this in her new book, Work Won’t Love You Back: How Devotion to Our Jobs Keeps Us Exploited, Exhausted, and Alone. Her feature in the new issue of The Nation magazine is headlined “First, Nurses Saved Our Lives—Now They’re Saving Our Health Care.”

Sarah, you are following our first discussion about the teachers’ unions fighting for safe workplaces for kids to return to around the country, to their schools. And then we talked about this first-time union vote organizing effort in Bessemer, Alabama, at an Amazon warehouse. Your thoughts on jobs right now?

SARAH JAFFE: I think pretty much everyone’s job has gotten a lot worse in the last year — right? — whether you’re like me and suddenly you’re trapped in this tiny little box here that you see me in pretty much, you know, for 10 hours a day every day, or you’re like those fast-food workers or Amazon workers you were just talking to who have to go into a workplace knowing that that workplace has just gotten a lot more dangerous. I think we’re all realizing how much worse things can get.

AMY GOODMAN: You talk about the irony of the term “Amazon fulfillment centers.”

SARAH JAFFE: Yeah, it’s so interesting, right? Because now we’re all expected, like I write about in this book, to find fulfillment from our jobs. But, actually, you know, when it comes down to it, we don’t work because we’re bored and just need something to do with our day. We work, like that last worker who was just speaking was saying, because we have bills to pay. And when that work isn’t covering the expenses that people have to feed their families, it’s a really big disconnect that we’re still expected to show up.

And what that last fast-food worker was saying about putting on that armor every day was so striking, right? Because, like, you do — I remember from my time working in the service industry — sort of have to go in and push all your feelings down and put on that smile.

AMY GOODMAN: You write in your book, “Once upon a time, it was assumed, to put it bluntly, that work sucked.” What changed? Describe the evolution of the labor of love myth.

SARAH JAFFE: Yeah. So, I trace this in the book through the history of sort of women’s unpaid work in the home and also the creative work of the artists, both of which are sort of always assumed to not be work at all. And as the decline of industrial labor, through outsourcing, through automation, through changes in the shape of capitalism, what we got instead was much more work, like the people that we’ve just been talking about, like those Amazon workers, like those fast-food workers, like the nurses and other healthcare workers that I wrote about in that Nation piece you mentioned, whose job is to provide the services that keep us all going, who are doing that so-called essential work that we’ve heard so much about since the pandemic.

And this is work that often requires you to show up and put on that smile, that requires you to, if not actually enjoy it, at least sort of pretend and project the image that you’re enjoying it, in order to go to work. And so, it’s literally a change in just like the shape of the economy and what jobs people are doing. But then that also spreads into things like the Amazon fulfillment center, where if the narrative we hear over and over again is that we go to work in order to find fulfillment, then even the Amazon billboard that I saw the other day off of the New Jersey Turnpike that says, “Get a job delivering smiles,” is like, well, the conditions that that worker was just describing in the warehouse in Alabama don’t sound terribly fulfilling, and they don’t sound like they’d make me smile.

AMY GOODMAN: So, how about teachers now being asked to risk their lives to go back to school? And then, of course, you have nurses doing the same thing, risking their lives every day, and they’re not only fighting to save their patients, but now the healthcare system, changing it.

SARAH JAFFE: Yeah, yeah. I mean, teachers are, I write the book, sort of the ultimate laborers of love. And we’ve had decades, maybe centuries, of expecting them to make up for all of the gaps in the social safety net, just by loving the kids that they teach more and more and more.

And so, you know, we’re seeing right now sort of the real return of this demonizing teachers rhetoric in yet another way, because teachers are not willing to march back into, in many cases, overcrowded, underfunded schools that haven’t had repairs. In Philadelphia, they were talking about, like, strapping a box fan to a window to create ventilation so that the virus supposedly wouldn’t spread in these school buildings that are overcrowded. In Los Angeles — I think the last time we spoke was when I was in L.A. for the teachers’ strike there, and they were fighting to get class sizes down from 45 students, in a room that is supposed to house 20. And, you know, you can’t socially distance with 25 kids in a room, let alone when you’ve packed 40 of them in a room that is supposed to have 25.

So, the very things that teachers have been demanding, that would have made the schools more safe to reopen in the first place, they’re now getting blamed for not being able to solve that problem. And it’s just this ongoing expectation that teachers can somehow, with their just pure motivation and love and care, overcome all of these obstacles that we have put, as a society, in their way.

AMY GOODMAN: And nurses, let’s end there, since it’s also —

AMY GOODMAN: — what you wrote your Nation piece on.

SARAH JAFFE: Yeah, absolutely, nurses who have been fighting since the beginning of the pandemic just to get enough masks and gowns to keep them safe while they’re trying to save lives. And in between, you know, they’ve been — the nurses’ unions, like National Nurses United, like New York State Nurses Association, have been the loudest voices in this country, saying, again, for decades, that we need a real national healthcare system that would actually prioritize public health, because this pandemic has taught us that we are only as well as the last person to get vaccinated, as the last person to get healthcare.

AMY GOODMAN: We want to thank you, Sarah Jaffe, for being with us, longtime labor and economic justice reporter. Her new book, Work Won’t Love You Back: How Devotion to Our Jobs Keeps Us Exploited, Exhausted, and Alone. 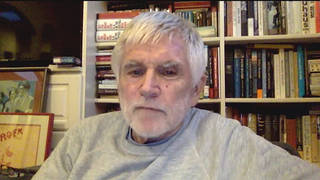