“Not Ready to Give Up”: Democrats Push Senate to Keep Popular $15 Minimum Wage in Stimulus Bill

As the House of Representatives prepares to pass a $1.9 trillion coronavirus relief package, a fight is brewing over the inclusion of an increase to the federal minimum wage to $15 an hour. The measure is at risk in the Senate, where conservative Democrats Joe Manchin of West Virginia and Arizona’s Kyrsten Sinema oppose its inclusion in the relief bill or suggest a lower amount. Congressmember Jan Schakowsky of Illinois says Congress must pass the minimum wage hike to help address inequality in the United States. “The current minimum wage, federally, is $7.25. Now, you can’t live on that. You can’t raise a family on that,” she says. “Those colleagues of mine who think that it is too high, that we have to have perhaps a regional wage, are so disrespectful.”

The House votes Friday on President Biden’s $1.9 trillion coronavirus relief package that includes a $15-an-hour minimum wage increase. The measure remains at risk in the Senate, where it faces opposition from Democrats Joe Manchin of West Virginia and Arizona’s Kyrsten Sinema. Manchin instead proposed an increase to just $11 an hour. If the minimum wage doesn’t survive in this bill, Biden has said he is open to legislation, but that would need 60 votes in the Senate to overcome a filibuster.

This comes as Vice News reports leaked internal documents show how McDonald’s spies on workers who are part of the Fight for $15 campaign: quote, “McDonald’s intelligence analysts have used a social media monitoring tool to collect and scrape data openly available online and to help it monitor social media accounts. The sources told Motherboard that the company’s intelligence analysts have attempted to use the tool to reconstruct the friends lists and networks of workers involved in the labor movement using fake Facebook personas” in order “to figure out their strategy, counter it, and find out where the key players are, and who they know,” unquote.

Congressmember Jan Schakowsky, you’ve pushed to raise the minimum wage to $15 an hour. You’re chair of the Consumer Protection and Commerce Subcommittee. Can you talk about what’s happening right now, what it means that the Senate parliamentarian makes a decision whether or not this will be included, but whether they move ahead with this anyway or make it a separate bill, why $15 an hour is so important?

REP. JAN SCHAKOWSKY: Well, we’ve been pushing for $15 an hour for a very long time. And as you know, it’s phased in. And there are states like Washington state that for a long time have had $15 an hour. The current minimum wage, federally, is $7.25. Now, you can’t live on that. You can’t raise a family on that. You have to have other jobs. That’s about $30,000 a year [sic]. You just can’t really make it. And so, we need to do this now in the United States.

You know, Reverend Barber made a brilliant statement. He said, “You know, the minimum wage during slavery was zero. And in all these years since then, we’ve gotten $7.25?” It is time now, really, to move toward a living wage.

I would say that the — you know, we’re certainly pushing for five and finally going to get to five, I believe, and it should be in this package. In fact, Senator Byrd, when he was in the Congress, made a whole speech about the importance of the minimum wage being raised. And we talk about the Byrd Rule, which we disqualify things like the minimum wage, so it is said. And so, we’re saying that it is perfectly consistent with this package to include the minimum wage.

And those colleagues of mine who think that it is too high, that we have to have perhaps a regional wage, are so disrespectful. And they have the nerve to use the excuse that it’s really going to be bad for people with disabilities, it’s going to be bad for low-income people, because jobs will be lost. There is no evidence of that whatsoever. Raising the minimum wage does nothing but good for millions of Americans.

NERMEEN SHAIKH: And, Congressmember Schakowsky, could you explain who exactly is opposing the inclusion of the $15 minimum wage, and also whether the so-called reconciliation process can be used with this proposal? What is that process?

REP. JAN SCHAKOWSKY: OK, the reconciliation process does allow us, us Democrats right now, to pass a big bill — $1.9 trillion is what’s been on the table — with 51 votes, and that’s it. We would have to break the tie with Kamala Harris, the vice president, coming in and doing that, but we can do that. About 80% of Americans want us to do this.

So, first of all, it’s the Republicans who are against this legislation altogether. There are so many things that they don’t want to see in this bill, but particularly, I would say, raising the minimum wage. And beyond that, there are a couple of Democrats still, in the Senate, that are saying that they don’t want that. And there’s a lot of pressure being directed at them — phone calls from constituents in their district, a mobilization of grassroots people — to try and change their mind.

And we’re not ready to give up yet — I should say, to give up at all. We’re going to press and press for including this as one of the most important aspects, raising the wage, having people be able to be able to take care of themselves and not rely on many of the benefits — which I approve of — that we want to do to help them. But people want to help themselves, and they want to have jobs that actually provide for themselves and their families. So, the reconciliation process would allow us to do that with just 51 votes instead of the 60 that would normally be required, unfortunately, because of the filibuster in the United States Senate.

AMY GOODMAN: Finally, on a different issue, Congressmember Jan Schakowsky, this week, one day after another, there have been hearings on the January 6th insurrection. In our next segment, we’re about to really delve into who was part of that. But I wanted to ask you about the high level of involvement of military, of police and retired police. Today we just reported in headlines about a New York police officer who engaged in one of the most vicious attacks on a Capitol Police officer, trying to rip off his helmet, gouging his eye, and then slamming him with a pole. He has just been arrested. But the percentage of the protesters being from the military or police organizations, your thoughts?

REP. JAN SCHAKOWSKY: Well, we’re going to pass the legislation Justice in Policing Act because this is not a new story about violence, too often, that occurs among law enforcement. We’re also finding out and really seeing every single day, in fact, the disparities between how people of color are treated as opposed to whites. I think this is part of the story of January 6th. And we’re going to have a full investigation and accountability, and we’re going to have to make changes in the law that enforce accountability. There is no question about it. And, you know, we’re going to have to look at the military and the police, who very often have immunity in an unjust way for the kinds of atrocities that are done. So, again, Nancy Pelosi is creating a task force that is going to — and a commission that’s going to be looking into all of these details. And then we will take appropriate actions to make sure —

AMY GOODMAN: And we just —

AMY GOODMAN: We just have 20 seconds, but you recently wrote to Facebook CEO Mark Zuckerberg demanding more information on the company’s anti-extremism measures, citing multiple reports that some of Facebook’s own staff were concerned about the, quote, “rapid spread of extremism and disinformation on Facebook.” What are the responsibility of these social media giants to tackle extremism? And do you favor anti-monopoly legislation against them, breaking them up?

REP. JAN SCHAKOWSKY: I actually do. But mainly what we’re talking about now is, again, accountability for hosting QAnon and other extremist organizations. And, you know, every click is really money for them. And so, you know, we’ve heard lots of apologies. It’s too little, too late. And now we need to have accountability of these platforms, that they take responsibility for what’s on those platforms.

AMY GOODMAN: We want to thank you for being with us, Democratic Congresswoman Jan Schakowsky from Illinois, senior chief deputy whip and chair of the Consumer Protection and Commerce Subcommittee.

Next up, we look at the growing probes into the deadly January 6th insurrection at the Capitol. Stay with us.

“Decades in the Making”: How Mainstream Conservatives & Right-Wing Money Fueled the Capitol Attack

NEXT“Decades in the Making”: How Mainstream Conservatives & Right-Wing Money Fueled the Capitol Attack 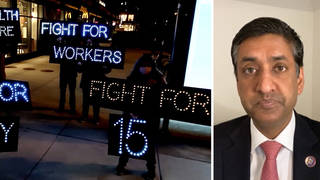