New York Governor Andrew Cuomo is refusing to step down despite growing calls for his resignation after multiple accusations of sexual harassment and misconduct, as well as his cover-up of thousands of COVID-19 nursing home deaths. Alessandra Biaggi, a New York state senator representing parts of the Bronx and Westchester, says it’s long past time for Cuomo to go and that the many scandals surrounding the governor reveal a consistent pattern. “The governor has not only abused his position of power, but he has used it in a way that is political and as a way to have the executive branch essentially protect himself and not the people of New York,” says Biaggi.

StoryAug 11, 2021“A Petty Tyrant with Too Much Power”: Former Cuomo Rival Zephyr Teachout Responds to Resignation

New York Governor Andrew Cuomo is refusing to step down despite growing calls following multiple accusations of sexual harassment and misconduct, as well as his cover-up of thousands of COVID-19 nursing home deaths. Both Senate Majority Leader Chuck Schumer and Senator Kirsten Gillibrand have called for his resignation.

SEN. KIRSTEN GILLIBRAND: Because of the multiple credible sexual harassment and misconduct allegations, it’s clear that Governor Cuomo has lost the confidence of his governing partners, as well as the people of New York. That’s why I believe that the governor has to resign.

AMY GOODMAN: President Biden, who’s a longtime friend of Cuomo’s, has yet to weigh in. He said the investigations should be allowed to happen.

We’re joined by New York state Senator Alessandra Biaggi. She is a Democrat who represents parts of the Bronx and Westchester, one of the first lawmakers to call for Cuomo’s resignation.

So, there are six women who have accused him of sexual misconduct, and then you have the nursing home scandal of the thousands of undercounted deaths in nursing homes. State Senator Biaggi, we had you on talking about the issue of sexual harassment and assault many months ago. What are you demanding now?

SEN. ALESSANDRA BIAGGI: So, I mean, thank you for having me, and good morning.

You know, I think, just zooming out for a second, the totality of the circumstances here are not, frankly, for the faint of heart. I mean, the details of the growing sexual harassment allegations and the nursing home death cover-up, as you’ve mentioned. We also have reports about the governor’s vaccine czar calling county officials to gauge their loyalty to the governor with regard to whether or not a county will receive vaccines. All of this, collectively, and other things that I haven’t mentioned, reveal a same and similar underlying issue and pattern, which is that the governor has not only abused his position of power, but he has used it in a way that is political and as a way to have the executive branch essentially protect himself and not the people of New York.

And so, I am calling for Governor Cuomo to resign. And I also — just, you know, pausing for a second — there are many of us, of course, who are calling for the governor to resign. It does not mean that the governor is going to resign, as I’m sure that the public watching can see. And so, if the governor does not resign, I do believe that the next step has to be starting the process for impeachment. Now, I’m sure also that many people are hearing what I’m saying and thinking to themselves, “Well, I thought that the Assembly actually did start the articles of impeachment or did start he impeachment process.” The Assembly started an investigation through their Judiciary Committee, which is not the same as drafting the articles of impeachment. In fact, there is only one other example in the entire United States history where an investigation begins before the articles of impeachment are drafted. In fact, the investigation piece is actually for the Senate. And so, I do think that is the next prudent step because of what is in front of us in terms of our responsibility as lawmakers and elected officials.

JUAN GONZÁLEZ: Well, Senator Biaggi, I wanted to ask you the — you worked for a time in the governor’s office. Could you talk about your own experiences in that workplace? And you’ve also said that you haven’t met a person in New York City politics who has a good relationship with Andrew Cuomo. Why is that?

SEN. ALESSANDRA BIAGGI: So, I did work for the governor. I worked in his executive chamber right after coming off of the 2016 election, thinking, like many people, that I was going to join an administration that was going to be this progressive beacon of New York and do a lot of good to push back against the Trump administration. Not only was I wrong, but I entered an administration that was part of this culture of fear, of toxicity, of berating people, of yelling at people. Many people that were surrounding me and my colleagues, in things that I personally experienced, were just constantly living day to day in a state of fear and intimidation.

And not only was that, in and of itself, sufficient to think that that is a workplace that not only is toxic, but also abusive, there was a lack of progress happening. So, that behavior and that pattern of abuse by the governor and his top aides is something that actually leads to bad governance. And so, you know, when I look back now, thinking about just what was possible at that time, there was so much more that New York could have done, and yet we were stopped because of the governor’s obsessiveness, frankly, with controlling everything around him. And so, there was not an email that went out the door without his approval, or a press release that went out the door without his or his top aides’ approval. And you might think that that’s a very normal way to operate an office, but when you have an office full of very ambitious, smart people who want to do their job and serve the people of New York but are prevented from doing so because there is one person who wants to have all of the control, you soon find that you cannot actually do your job.

JUAN GONZÁLEZ: And in terms of those who say that the governor should be given the benefit of having an actual investigation verify these allegations, what do you say to them?

SEN. ALESSANDRA BIAGGI: Well, you know, the governor is guaranteed due process under the law, of course. But calling for the governor to resign is absolutely not a judgment about his liability for any alleged criminal acts that we’re talking about here. The formal investigations, right now there are several of them. There are two federal investigations, two for nursing homes — the FBI and the EDNY, Eastern District of New York — and then there’s the attorney general’s investigation with regard to the sexual harassment, assault and misconduct claims. Those are all allegations that can continue to move forward, and should continue to move forward. But there is a very stark difference between investigations, that may lead or end in criminal charges, and the question of confidence in our political leadership.

And that’s why I continue to stand by my call for the governor to resign, especially, again, in this moment that we are in, which is not a moment to take lightly. We are in the midst of budget. We are about to start planning for the recovery of the state of New York. We have a $16 billion deficit. There is a lot of work to do. And I think what we are hearing in the days — as each day goes on, is the governor saying, “We have work to do. We have to get back to work,” as if all of the things that we’re describing here are a distraction that he doesn’t want to think about — and I’m sure that he doesn’t want to think about it. But the point is that these are distractions that have been created because of the behavior of our governor. And the rest of us want to get back to work to be able to do our jobs.

AMY GOODMAN: Do you think that Governor Cuomo, in his hatred for Mayor de Blasio, and also the kind of pressure he’s under now as de Blasio calls also for him to resign, is actually shortchanging the city, de Blasio said, to the tune of hundreds of thousands of vaccines? And do we see this in other places in New York? And also, you shared text messages with New York magazine showing the kind of harassment that one receives, particularly you, from his aide, Melissa DeRosa, who’s often at his side. And just remember, we have to abide by FCC rules on not expressing curses on the air.

SEN. ALESSANDRA BIAGGI: Yes, I will surely not repeat the curse words of members of the governor’s administration, so you have my word on that.

Listen, I think that when we listen to what de Blasio was saying about shortchanging the city, that’s not something that’s an anomaly. It’s not unusual. In fact, the governor’s decisions about how he governs are very political. He oftentimes makes decisions based on those who are loyal to him. So, you know, the stories coming out about his vaccine czar calling people, calling county executives, and trying to gauge their loyalty about their relationship to the governor, and then decisions being made about vaccines, it’s not an unusual thing for those of us who have been working in New York state government under this executive administration. But it’s also not acceptable, because —

SEN. ALESSANDRA BIAGGI: Sure — to make decisions based on politics in a moment where we can save lives is outrageous. And so, you know, I think that there is a lot of work to be done here, and I think that this is a governor who’s not able or fit to do it. 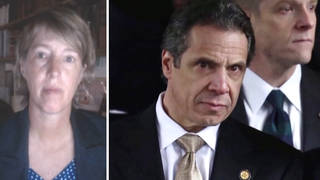