As the world’s worst humanitarian crisis enters its seventh year in Yemen, we look at the toll of the U.S.-backed, Saudi-led air war. A new report by the Yemen Data Project summarizing the impact of air raids over the past six years finds the bombing campaign has killed almost 1,500 civilians every year on average, a quarter of them children. Journalist Iona Craig, who heads up the Yemen Data Project, says there have been almost 23,000 air raids since the war began in 2015. “We’re still seeing mass civilian casualty events,” says Craig. “We’re still seeing a large number of airstrikes on residential areas and, of course, on civilian infrastructure, which has been absolutely decimated over the last six years of the conflict.”

AMY GOODMAN: We move now into our last segment, on Yemen, where the world’s worst humanitarian crisis enters its seventh year this week. The World Food Programme warned this month that Yemen is headed toward the biggest famine in modern history, projecting around 400,000 Yemeni children under the age of 5 could die from acute malnutrition this year as the Saudi war and blockade continues — unfortunately, backed by the United States.

Now a new report by the Yemen Data Project summarizes the impact of the past six years of air raids. It found the bombing campaign has, on average, killed almost 1,500 civilians every year, a quarter of them children.

For more, we’re joined by Iona Craig, award-winning journalist who heads the Yemen Data Project with colleagues in Yemen.

Welcome back to Democracy Now! It’s great to have you with us from Britain now. Can you talk about what’s happening on this, to say the least, sad anniversary?

IONA CRAIG: Well, the data tells us now that there have been almost 23,000 air raids, and that really covers almost 66,000 individual airstrikes since the war began in March 2015. So you’re looking at at least 10 air raids every day, with an average of up to 30 individual airstrikes. And although the rate of air raids has fallen from around 2018 until 2020, we then saw an increase again last year for the first time since then, and an 83% increase in air raids. So, although there has continued to be a decline in civilian casualties, we’re still seeing now an increase in air raids in 2020 despite a 45-day ceasefire.

We’re still seeing a large number of airstrikes on residential areas and, of course, on civilian infrastructure, which has been absolutely decimated over the last six years of the conflict. We’ve seen strikes — we’ve seen 86 strikes on medical facilities, for example. We’ve seen 800 air raids on transport infrastructure, 150 air raids on water and electricity facilities. And the list goes on, really. So, the damage that has been done to civilian infrastructure in the country will go into the hundreds of millions of dollars, as well, of course, impacting the humanitarian crisis that the country is now facing.

IONA CRAIG: Well, we know the United Arab Emirates has been playing a leading role in the air war in particular. It is one of the main nations in the region involved in the air campaign. What we don’t know, from the data that we collected, is which individual states are responsible for individual strikes. We don’t know that from the data that we gather. It is all from open source, so it’s very hard to tell which individual nations, whether it be Saudi Arabia, whether it be the United Arab Emirates or it be other countries, like Jordan, that may be responsible for individual strikes on particular targets.

But this is part of the problem and one of the reasons why the data is being collected. There is a severe lack of accountability and transparency in the airstrikes that are happening, unlike in Syria and Iraq, where you will have Western nations who are part of the coalition carrying out airstrikes at least providing some information on the strikes that they are carrying out, as far as data is concerned. There is nothing in Yemen. This is the only sort of data collection on the air war that gives information on both the targets and the civilian casualties in the conflict as part of the bombing campaign. Saudi Arabia has not given out any regular information on airstrikes at all. They’ve done some self-policing, where there have been claims of violations of international humanitarian law, where there have been mass civilian casualty events as a result of the bombing campaign, but those are only on a handful of incidents. So, this data is really crucial to getting an overall understanding of the state of the air war, the civilian casualties that happened and the damage that has been done to Yemen’s infrastructure.

NERMEEN SHAIKH: And earlier this week, Saudi Arabia actually proposed a ceasefire, but the Houthis rejected the deal, saying it offers nothing new. And Human Rights Watch also recently came out with a report condemning the Houthi rebels, saying they’ve been attacking a displaced people’s camp. And you have said that both Houthis and Saudi Arabia, their de facto blockade, is what’s led to Yemenis starving. So, could you talk about the role that the Houthis have been playing increasingly in recent years and what they’ve been responsible for in terms of the destruction of Yemen’s infrastructure?

And that’s particularly important at the moment, because the Houthis have been pushing this offensive on the city of Marib. And that puts so many people in danger. As we know, there are over a million people who have been displaced to the city of Marib and around there. That then means that you’ll have displaced camps that are being targeted both by ground forces and potentially in airstrikes, as well. So, the concern, particularly at the moment, is for civilians in Marib, that we may see then an increase in civilian casualties, purely because there is increased violence both in the air war and in the ground war, that have been pushed by the Houthis in the last few weeks, because of their uptick in fighting and attempts to take the city of Marib.

But we’ve seen this time and time again in the conflict, when residential areas become a focus of the fighting, whether that be in places like Taiz or in Aden earlier on in the conflict. That’s when you will see more airstrikes in those areas and more civilian casualties. And Taiz is — the city of Taiz and the governorate has been one of the most heavily hit, second most heavily hit governorate in the country, and with civilian casualties reflecting that, as well. And so, for every single air raid there is in a residential area, there are at least three civilian casualties. And this is what the concern is over Marib at the moment.

AMY GOODMAN: Iona, finally, we have a new administration in the United States, right? President Biden was elected, says he’s taking a different approach to Saudi Arabia. Do you see a difference when it comes to Yemen? What do you think the Biden administration should be doing?

But, of course, the hope is that it will have also an impact on the parties to the conflict, particularly in the case at the moment between Saudi Arabia and the Houthis coming to some kind of at least political talks and an attempt to a ceasefire, which the Saudis have already announced. Unfortunately, although the Saudis announced that they wanted a ceasefire, we’ve still seen airstrikes happening in the first 24 hours of that declaration.

AMY GOODMAN: Iona Craig, we’re going to have to leave it there, but we thank you for being with us, and, of course, we’ll continue to cover Yemen. Iona Craig is a journalist who heads up the Yemen Data Project. We’ll link to your latest report.

Before we end, Nermeen, I wanted to wish you a very happy pre-birthday.

AMY GOODMAN: Well, it’s going to end soon, and we will be together. I’m Amy Goodman, with Nermeen Shaikh. Thanks for joining us. 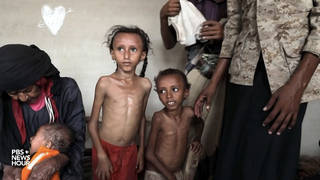