There are about 2.5 million farmworkers around the U.S., many of them undocumented immigrants working under dangerous and exploitive circumstances without sick leave or healthcare. Despite their status as essential workers, however, many farmworkers are facing an uphill battle to get vaccinated against COVID-19. Estella Cisneros, legal director of the Agricultural Worker Program for California Rural Legal Assistance, says an uneven rollout in California as well as technical barriers have left many farmworkers unvaccinated. “There’s been a lot of inequities that we’ve seen,” she says. We also speak with Mary Jo Dudley, director of the Cornell Farmworker Program, who says it’s “puzzling” that farmworkers in New York state were left out of the current phase of vaccine distribution “at a time when we’ve seen an increasing number of COVID cases among the farmworker population.”

AMY GOODMAN: This is Democracy Now!, democracynow.org, The Quarantine Report. I’m Amy Goodman, with Juan González, as we look at the push to vaccinate some two-and-a-half million farmworkers around the country who are essential workers and have continued to labor throughout the pandemic. Farmworkers are mostly Latinx, many undocumented. Their employers do not provide sick leave or healthcare. This is Iris Figueroa of the Farmworker Justice, addressing the House Appropriations Labor Subcommittee Tuesday.

AMY GOODMAN: According to CDC guidelines, farmworkers are part of Phase 1B, the second group to receive the vaccine, after frontline healthcare workers. California Governor Gavin Newsom has still said the state will provide 34,000 vaccines to farmworkers, and thousands are now being vaccinated at pop-up clinics in the fields, hosted by growers and run by the county health department. So far, data shows just 16% of vaccines in California have been given to Latinx residents, even though they account for nearly 40% of the state’s population, and Black and Latinx Californians are suffering the highest rates of COVID deaths in the state.

Meanwhile, here in New York, the news outlet Documented New York reports more than 50,000 farmworkers were removed from the Phase 1B tier at the last minute, just before New York opened up its vaccine rollouts to other workers, including those in the food industry, like grocery, restaurant and food delivery workers.

This comes as Colorado, Idaho, Michigan and Wisconsin say they plan to start vaccinating farmworkers this month. But some states have restrictions that could deter workers, like Florida, which grows much of the nation’s citrus fruit, where people must prove residency to get a vaccine. The New York Times reports some pharmacies in Georgia have turned away immigrants unable to show a Social Security number, and officials in Nebraska say immigrant workers who lack legal status at meatpacking plants will be vaccinated last.

For more, we go to Modesto, California, where we’re joined by Estella Cisneros, Agricultural Worker Program legal director at California Rural Legal Assistance. Also with us, in Ithaca, New York, Mary Jo Dudley, director of the Cornell Farmworker Program, faculty member in the Department of Global Development at Cornell University.

We welcome you both to Democracy Now! Estella Cisneros, let’s begin with you. Lay out the issue in California. Who is getting vaccinated? Who’s not?

There’s been problems, however, with the way that vaccines are distributed statewide. They are run by the different counties, especially the public health departments. And there’s been a lot of inequities that we’ve seen throughout counties, because of the decision by the governor to put people aged 65 or over before individual employment sectors. That was originally the intent that the CDC recommended, but that was a last-minute change in the state, as well.

JUAN GONZÁLEZ: And could you talk about just the issue of being able to schedule a vaccine appointment, since so much of this is being done online and sometimes in extremely complex forms you have to fill out online? The impact that this has on farmworkers that are living basically in rural areas, maybe don’t even have internet accessibility? Could you talk about those who are trying to help farmworkers get on the list of eligible vaccine recipients and to get appointments?

ESTELLA CISNEROS: Definitely. That has been a challenge in a lot of counties. Some counties are only allowing appointments to be made online. Some local pharmacies that are now supplying the COVID vaccine are also only making appointments online. That’s a huge barrier to individuals who have either little technology literacy or who lack access to broadband services or other reliable internet or cellphone services. There’s also been issues with call centers — or, excuse me, where people can make appointments by phone, not having either Spanish-speaking or, in the case of farmworkers in California, individuals who speak Mexican Indigenous languages. So, there’s just the barrier of actually making an appointment, once agricultural workers become aware that they are eligible. There is that challenge that we’ve definitely have seen expressed throughout the different counties in the state.

JUAN GONZÁLEZ: And can you talk about the situation specifically in Riverside County in California, a county that’s nearly 50% Hispanic, and it’s become the first — according to The New York Times, the first in the nation to prioritize farmworkers for vaccination?

ESTELLA CISNEROS: Definitely. So, in that area, what appears to be happening is there appears to be a pretty strong connection between the local public health department and employers in terms of providing either pop-up vaccination efforts or other similar efforts like that to actually bring vaccines into the fields. That’s the first county that I am aware of that is doing a program like that. In most other counties, it falls on the local public health departments. In some other counties, there’s also collaborations between local clinics and other service providers that have deep connections to the farmworker community. But in Riverside, it does appear to be that. That’s certainly being exemplified as a really good example of what we need to do statewide. And that’s certainly something that we would love to see replicated in other counties that are still struggling to vaccinate farmworkers.

Riverside does have significant farmworker population, but, actually, farmworkers — there’s more farmworkers in other counties throughout the state, specifically in the Central Valley. That’s actually where Governor Newsom a week ago made an announcement that more — that he was actually going to allow and promote 11 pop-up vaccination sites in the Central Valley specifically, to address that concern, which is that there, a large — there’s a lot more farmworkers that live there, and they have really struggled with not just vaccine access, but also the distribution of the vaccine.

It did seem like, for some time, the vaccine distribution was being done by the number of healthcare providers in each county. And so, in one county in the Central Valley, for example, they had the second-lowest vaccine distribution numbers, even though they had the fifth-highest number of COVID-related deaths. The change in this provision of pop-up vaccination sites will hopefully address that concern. But also, the governor has said that more vaccines are going to come to that area because it’s essentially a twofold problem. It’s not just do you have enough vaccines, but also do you have the infrastructure to actually be able to provide those vaccines to the population that you’re trying to reach.

AMY GOODMAN: And, Mary Jo Dudley, you’re head of the Cornell Farmworker Program. Can you explain what happened? The CDC guidelines include farmworkers in the list of frontline essential workers now eligible to get the vaccine in Phase 1B. That’s like corrections workers, food and agricultural workers, U.S. Postal Service, grocery store workers, etc., as well as daycare workers. But at the last minute, the state of New York removed farmworkers from that list?

MARY JO DUDLEY: Thank you, Amy. It’s very puzzling, because on February 9th, President Biden set aside an additional 11 million vaccines for underserved and vulnerable populations, among them farmworkers, homeless individuals, limited English proficiency communities and those living in public housing. So this would bring additional vaccines to New York state. It would not diminish the number currently coming.

But the problem right now is that farmworkers are not included on the list of those eligible to receive COVID-19 vaccines in New York state at a time where we see an increasing number of cases of COVID among the farmworker population. And we’ve seen farmworkers, farmworker-led organizations, such as Alianza Agrícola, advocacy groups, healthcare providers and farmers have all been calling upon the governor to add farmworkers to the list of those eligible. And the response is puzzling, that this hasn’t happened yet.

JUAN GONZÁLEZ: And how would these vaccines be distributed to farmworkers in New York state? Are there distribution centers already being set up?

MARY JO DUDLEY: Yes, Juan. Thank you for that question. Because these vaccines would be distributed directly to the federally qualified health centers, and among them are the migrant health centers, so they would go directly to those centers that have the language abilities, cultural competency, 20 or more years of experience in giving vaccines, and the equipment which would allow them to go to farms to administer the vaccines. It’s important that these vaccines would go to those centers, because they are already known and trusted by the farmworker population, and they know where the farmworkers live. So we’ve had a lot of interest, offers of farmers to make their farm a pop-up site. But we don’t have the vaccines. And until farmworkers are added to the list, vaccines cannot be administered to them in New York state.

AMY GOODMAN: You’ve interviewed dozens of farmworkers. What have been their experience with COVID-19, many sick?

MARY JO DUDLEY: Many sick, and it’s very distressing that many of them have experienced long-term symptoms, such as headaches, dizziness. And this long-haul COVID among the farmworker population is very worrisome, since they wouldn’t have any access to a security net, a Social Security net, a backup net, and they continue to feel ill after having recovered from COVID.

AMY GOODMAN: I want to thank you both for being with us. In the U.S., we call it “long haulers”; in the rest of the world, they call it “long COVID,” those that suffer from COVID for many, many months since they have gotten it. Mary Jo Dudley, director of the Cornell Farmworker Program, faculty member at Cornell University’s Department of Global Development, and Estella Cisneros, speaking to us from Modesto, California, legal director of the California Rural Legal Assistance’s Agricultural Worker Program.

Essential or Expendable? Farmworkers Condemn Lack of Protection and Economic Help During Pandemic 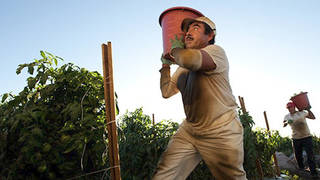 Essential or Expendable? Farmworkers Condemn Lack of Protection and Economic Help During Pandemic