Brazil now accounts for about a quarter of all COVID-19 daily deaths worldwide, more than any other country, and its overall death toll of more than 310,000 is surpassed only by the United States. Far-right Brazilian President Jair Bolsonaro faces intense pressure to abandon his opposition to vaccinations, lockdowns and mask-wearing. Dr. Miguel Nicolelis, professor of neurobiology at Duke University and former coordinator of the largest scientific COVID-19 task force in Brazil, says Bolsonaro “has played on the side of the virus” by opposing any efforts to control the outbreak. “Since the beginning, he downplayed the severity of the pandemic.”

AMY GOODMAN: This is Democracy Now!, democracynow.org, The Quarantine Report. I’m Amy Goodman, with Nermeen Shaikh, as we turn to the mounting public health and political crisis in Brazil, which now accounts for about a quarter of all COVID-19 daily deaths worldwide, more than any other country. About 66,000 people died in the month of March as cases skyrocketed, leaving Brazil’s hospital system on the verge of collapse. Brazil suffered a record close to 4,000 deaths in a single day Tuesday. Its overall death toll of more than 321,000 is surpassed only by the United States. This comes as far-right Brazilian President Jair Bolsonaro faces intense pressure to abandon his opposition to vaccines, lockdowns and mask-wearing.

Brazil is also facing a major political crisis. Earlier this week, the heads of Brazil’s Army, Navy, Air Force all quit in an unprecedented move, a day after Bolsonaro ousted his defense minister as part of a broader Cabinet shake-up.

For more, we go to São Paulo, Brazil, where we’re joined by Dr. Miguel Nicolelis, professor of neurobiology at Duke University, former coordinator of the largest scientific COVID-19 task force in Brazil.

Doctor, welcome to Democracy Now! São Paulo is suffering so horrendously right now, like the rest of Brazil. Can you describe what’s happening?

DR. MIGUEL NICOLELIS: Thank you very much for the invitation. It’s a great pleasure to be with you guys today.

Well, São Paulo is the epicenter of the Brazilian tragedy right now. It’s like being in a battlefield. Hospitals are full to capacity. The governor has tried to manage the crisis unsuccessfully. And today we, you know, woke up with the news the cemeteries are filling up. And basically, you have the sense that you’re in some sort of battlefield back in World War II, because, you know, supplies are running down, doctors are basically at the limit of what they can do right now, and there’s very little hope at the end of the tunnel right now in Brazil.

NERMEEN SHAIKH: Dr. Nicolelis, could you explain, you know, the role of the Bolsonaro administration, the steps that he’s taken, that have made the crisis as bad as it is? You’ve called him public enemy number one.

DR. MIGUEL NICOLELIS: Well, yeah. Basically, he has done nothing. Actually, he has played on the side of the virus down here in Brazil, because, since the beginning, he downplayed the severity of the pandemic and was on TV, on social media, everywhere, talking, you know, every day against any measure of social distancing, mask using, or even against vaccines, throughout the first year of the pandemic in Brazil. So, he basically has transformed this crisis into a political, ideological battle. And according to everyone that is involved in studying the pandemic and trying to see what happened with this crisis in Brazil, he is the main enemy of any attempt to control the pandemic in the country.

NERMEEN SHAIKH: And also, you know, during the course of this one year of this pandemic, Brazil has had no less than four health ministers. But I want to ask about something that’s very striking about the demographics of the people who have been worst affected by the virus in Brazil, namely that there are a lot of young people who are hospitalized and who are dying, which is quite different from what we’ve seen in most parts of the world. So, could you explain what’s happening? Why are so many young people getting sick, and even dying?

DR. MIGUEL NICOLELIS: Yeah. Well, during the first wave, we saw the pandemic being focused on people above 60, 65 years old. But since November last year, the demographics of the — now that we got from hospitals and from ICU analysis, is that much younger people are being admitted to the hospitals and to the ICUs. And, in fact, at the largest ICU facility in Brazil, here in São Paulo at the University of São Paulo, you know, a hospital with more than 230 ICU beds, what you see now is that the age group more affected, and the one that is dying the most, is between 35 and 40 years old. This was a tremendous shock.

And this was compounded by the discovery a couple weeks ago that Brazil is also suffering from an epidemic of premature deliveries. So, pregnant women are being infected at a record rate down here. It’s leading to premature deliveries and babies that need to go to ICUs all over the country So, for the first time in history, we are seeing ICUs for babies, newborn babies, completely full in Brasília, in states in the southern part of Brazil.

So, we have seen a dramatic shift in this demographics. And some people are blaming the new variant. Others are saying that, no, more young people are violating the isolation rules that have been imposed in many states in Brazil. So, it’s basically a combination of both factors, I think.

AMY GOODMAN: Dr. Miguel Nicolelis, earlier this week, six Cabinet ministers resigned, including the foreign minister, who some considered the worst foreign minister in Brazil’s history. Many blamed him for failing to get enough vaccines by compromising ties with China, with Russia and India. Can you talk about the significance of this and how it is that Brazil, that really was a testing site — right? — a place where clinical trials were performed a lot, has so much difficulty getting vaccines?

DR. MIGUEL NICOLELIS: Yeah, this is a crisis that has been created by many fatal mistakes by the Bolsonaro government. And the foreign secretary was one of the worst in the Cabinet, and certainly the worst foreign secretary that Brazil has ever had, probably since imperial times, in the 19th century.

What happened on Monday was unprecedented. You know, the only episode that is close — but not even close — is back in 1977, when the general in charge of the military junta that was governing Brazil fired the defense minister, who was plotting a coup d’état. That was a very particular night in Brazil in 1977. But never in Brazilian history, the heads of the Army, Air Force and Navy were fired on the same day. This was a shock. And for 48 hours down here, we were not sure whether there was a sort of a coup being plotted and put in place by Bolsonaro.

So, the Armed Forces have now strongly denied that they want to support any adventure in that direction and, in fact, have rebutted the president by saying that they will always follow the Constitution. But in a country that has suffered a coup d’état in 1964 that lasted 21 years, a military coup d’état, every Brazilian remembers the disaster and the death toll of that period in the country. So —

AMY GOODMAN: This is the anniversary.

DR. MIGUEL NICOLELIS: Yes. And this was, exactly, on the day of the anniversary of that coup d’état. So, you can imagine how people were feeling for these two days here. And yesterday, the tension reached a very high level, until the new defense minister announced the new heads of the Army, Air Force and Navy. And it’s still unclear what is going to unfold in the next few days.

NERMEEN SHAIKH: And, Dr. Nicolelis, you’ve talked now about the role of the administration, various members of Bolsonaro’s administration, that have led to problems, to say the least, with the handling of the pandemic. And I’d like to ask more about the rate and scale of vaccination there. The news just emerged yesterday that one of the vaccines that Brazil had ordered 20 million doses of, that’s the COVAXIN COVID-19 vaccine developed by India’s Bharat Biotech company, that those 20 million doses — the health regulator in Brazil has said that vaccine doesn’t meet Brazil’s manufacturing standards. Could you explain what happened and what vaccines Brazil has access to?

DR. MIGUEL NICOLELIS: Well, right now the vaccination rollout has been a total disaster. Brazil has always been, in the last four decades, one of the best countries in terms of implementing national vaccination programs. The World Health Organization has always used Brazil as, you know, the poster boy of a good national policy for vaccination. At this moment, Brazil has vaccinated with one dose about 8% of the population. That’s about 17.8 million doses, which is way below the target of the National Immunization Program that was unfolded in December.

Right now Brazil has access only to the CoronaVac, the Chinese vaccine, and the Oxford-AstraZeneca vaccine. However, we heard this morning that about 50% of the doses that were planned for April are now not available. So, we basically have dropped half of the doses that were supposed to be delivered in April.

So, regarding the ANVISA, the Brazilian regulatory agency, Brazil has a very high standard of approval for vaccines. You know, it has followed this policy, as I said, for many decades. And at this point, we are not clear what happened in this latest decision. This has not yet been published, the details. So we are waiting to see what happened in terms of the regulators, because the people involved, at least at a technical level, are really well equipped to make this decision. But we are not sure if there was any political interference at the highest possible level.

AMY GOODMAN: And finally, Dr. Nicolelis, the effect on the Indigenous population of Brazil?

DR. MIGUEL NICOLELIS: Well, that’s a tragedy inside of a tragedy. We started reporting on this in our committee back in May of last year, saying that the numbers were already above the national average of infected people. And still nothing happened. The number of deaths were above the national average, and the government didn’t take any measure or any attitude. So, we reported this nationally and internationally for close to 10 months. And the numbers —

DR. MIGUEL NICOLELIS: Oh. And the numbers, you know, keep growing. So it’s a tragedy inside of a tragedy.

AMY GOODMAN: Dr. Miguel Nicolelis, professor of neurobiology at Duke University, former coordinator of the largest scientific COVID-19 task force in Brazil, has been in Brazil for the last year, speaking to us from São Paulo.

Democracy Now! is currently accepting applications for a senior news producer to join our team here in New York City. Check it out at democracynow.org. I’m Amy Goodman, with Nermeen Shaikh. Thanks so much for joining us. 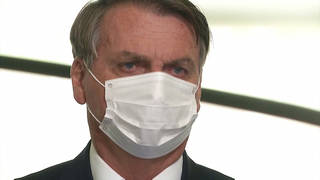