President Biden has moved up the deadline for states to make the COVID-19 vaccine available to all adults by April 19, instead of May 1. This comes as daily cases are on the rise and new variants continue to spread, including the U.K. variant, which has now been reported in every state and could account for 70% of cases in Michigan, which is seeing a major surge. The U.S. has now delivered over 168 million vaccine doses, the highest number in the world. Meanwhile, the World Health Organization says richer countries must urgently combat vast global vaccine inequities.

Tedros Adhanom Ghebreyesus: “Scaling up production and equitable distribution remains the major barrier to ending the acute stage of this pandemic. It is a travesty that in some countries health workers and those at-risk groups remain completely unvaccinated.”

Brazil recorded over 4,000 daily COVID-19 deaths for the first time, bringing its total death toll to nearly 337,000, second only to the U.S.

India reported a record of nearly 116,000 new cases Wednesday, taking its total caseload to 12.8 million, the third highest in the world after Brazil and the U.S. Four witnesses took the stand Tuesday in the trial of former Minneapolis police officer Derek Chauvin, who killed George Floyd last May. Minneapolis Police Department trainer Johnny Mercil testified Chauvin kneeling on Floyd’s neck was not a trained restraint and that officers are instructed to only use force that is proportional to a threat. This is Mercil answering questions from the prosecution.

Steve Schleicher: “So, if there was — say, for example, the subject was under control and handcuffed, would this be authorized?” Arkansas has become the first state to criminalize gender-affirming treatment for transgender youth after state lawmakers voted Tuesday to override Governor Asa Hutchinson’s veto of the highly contested bill. The ACLU is suing over the new law, which it says will have deadly consequences. In Missouri, Tishaura Jones has become the first Black woman ever elected as St. Louis mayor. She addressed supporters yesterday at a victory speech.

Jones has also advocated a shift from incarceration to supporting prevention efforts. She has served as city treasurer since 2013 and was a Missouri state representative for five years. 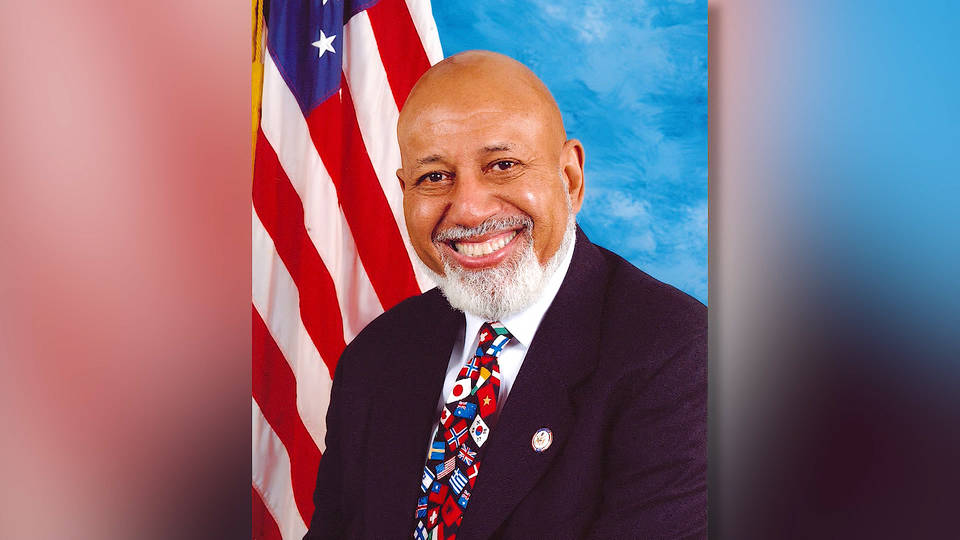 Florida Democratic Congressmember Alcee Hastings has died at the age of 84 after a battle with pancreatic cancer. Hastings, a former lawyer and Florida’s first African American federal judge, had served in Congress for nearly four decades, where he championed civil rights. A special election will be scheduled to fill his seat. In legislative news, the Senate parliamentarian ruled Democrats can use budget reconciliation again during this fiscal year, meaning they can advance more of President Biden’s agenda, such as the recently unveiled $2 trillion infrastructure plan, with a simple majority, bypassing a Republican filibuster. 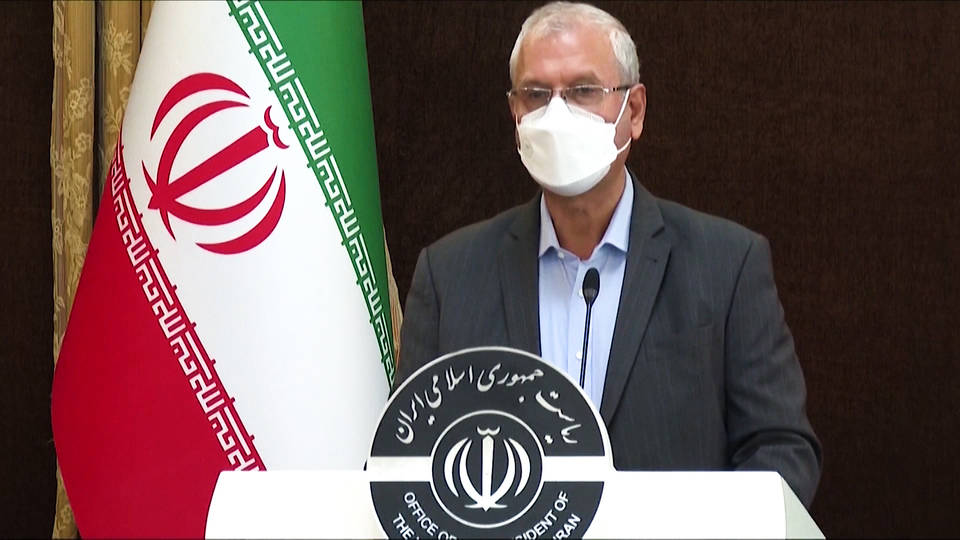 U.S. and Iranian officials expressed optimism following the start of “constructive” talks in Vienna aimed at reviving the landmark 2015 Iran nuclear agreement, from which the U.S. unilaterally withdrew in 2018 under former President Trump, reimposing harsh sanctions on Iran. The two sides are meeting indirectly through the remaining parties in the nuclear accord. This is an Iranian government spokesperson.

Ali Rabiei: “We are confident that we are on the right track. And if America’s will, seriousness and honesty is proven, it could be a good sign for a better future, a future of peace and security for the region and the world.”

Meanwhile, an Iranian military vessel appears to have been attacked Tuesday in the Red Sea by an Israeli mine. The New York Times reports Israeli officials notified the U.S. that Israel was responsible for the attack. It was the latest in a series of naval attacks between Israel and Iran. The U.N. is warning over 27 million people in the Democratic Republic of the Congo — one-third of the population — are facing acute hunger driven by ongoing conflict and the COVID-19 pandemic. The World Food Programme says it needs at least $660 million to maintain its aid to the DRC, which has the highest number of people in urgent need of food assistance in the world. Amnesty International USA is calling on the Biden administration to cease its “outdated and destructive” policy of developing and deploying antipersonnel landmines. The statement was issued after the Pentagon confirmed this week the U.S. would not change its position on landmines. One hundred sixty-four countries have signed on to the 1997 Mine Ban Treaty; the U.S. is not one of them. Over 2,000 people were killed in 2019 by antipersonnel mines. In the occupied West Bank, mourners attended the funeral of Osama Mansour, a 42-year-old Palestinian man who was killed by Israeli soldiers at a checkpoint Tuesday. Soldiers say Mansour tried to ram his vehicle into them, but his wife, who was also in the car and sustained bullet fragment wounds, disputes the claim.

Sumaya Mansour: “They told us to switch off the car and park it. We switched it off and parked there. He only asked us where we are coming from and where we are going. That was it. Then he told us to go, leave. We switched the car on and left. And within seconds, four soldiers started shooting at us from behind.”

The mayor of Biddu village, where Osama Mansour lived, says the shooting may be brought to the International Criminal Court, which is investigating war crimes in the Occupied Palestinian Territories.

Yemeni American Activists on Hunger Strike to Call for End of U.S.-Backed, Saudi-Led War on Yemen 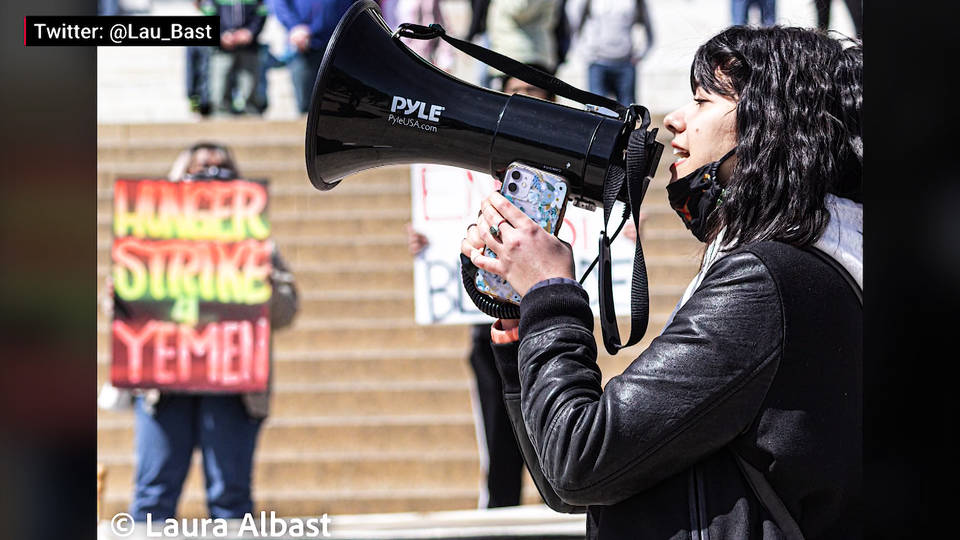 In Washington, D.C., six Yemeni American activists have been on hunger strike for nine days, protesting the U.S.-backed, Saudi-led war and blockade that have crippled Yemen’s economy and created the world’s worst humanitarian disaster. The hunger strikers, who are members of the grassroots group Yemeni Liberation Movement, are demanding an end to all U.S. support for the blockade and for President Biden to pressure Saudi Arabia to end the war.

In Oklahoma, an investigation is underway after a soldier at the Fort Sill Army training base said she was sexually assaulted by 22 servicemembers — sometimes in groups. At least 20 personnel at Fort Sill have been suspended. Speaking to The Intercept, an Army official referred to the case as “Fort Hood 2.0” — referencing the sexual harassment and killing last April of 20-year-old soldier Vanessa Guillén by a fellow servicemember. 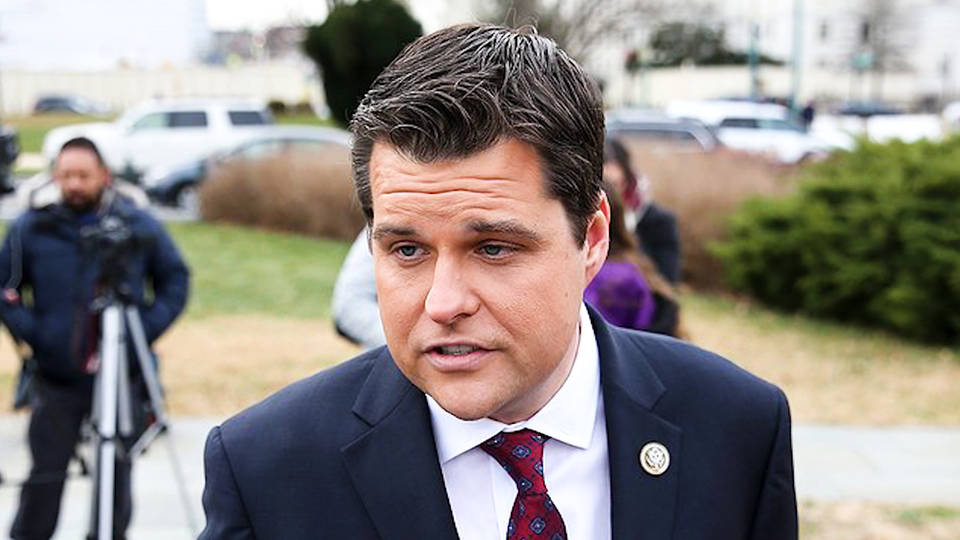 The New York Times is reporting Florida Congressmember Matt Gaetz sought blanket preemptive pardons for himself and congressional allies in the final weeks of President Trump’s term. Gaetz was already under a Justice Department sex trafficking investigation at the time. In climate news, the concentration of carbon dioxide in the atmosphere surpassed 420 parts per million for the first time in recorded history. The measurement puts the planet roughly at the halfway point on the path to doubling preindustrial CO2 levels. The reading was taken at the Mauna Loa Observatory on the Big Island of Hawaii this past weekend. In New York, Governor Andrew Cuomo and lawmakers struck a deal Tuesday to create a $2.1 billion assistance fund for workers excluded from federal benefits during the pandemic, many of them undocumented. Excluded workers organized for months, with some taking part in a hunger strike over the past three weeks to protest the unjust system. Advocates hailed the deal, which is part of the state’s proposed $212 billion budget, as a major victory, but some warn the measure contains burdensome proof-of-employment requirements, which can be harder for undocumented workers and those in informal jobs to provide. Click here to see our interview on the subject.