On Monday, we spoke to writer and poet Mohammed El-Kurd, whose family is facing forceful eviction from the Sheikh Jarrah neighborhood of Jerusalem. He also spoke on CNN and MSNBC. After these interviews, Israeli forces arrested him and forcibly removed him from Sheikh Jarrah. It was captured in a dramatic video shared widely on social media. “They just threw me in the street and told me that I couldn’t come back into the neighborhood,” El-Kurd says. “They’ve done this many times to us, many of my family members, many of my neighbors. They do this routinely.” El-Kurd has been one of the most prominent Palestinian voices in recent weeks describing what is happening in Jerusalem’s Sheikh Jarrah neighborhood, where Israeli authorities’ planned evictions of several Palestinian families to give their homes to Jewish settlers has been widely described as “ethnic cleansing.”

On Monday, we spoke to Mohammed El-Kurd, whose family is facing forceful eviction from the Sheikh Jarrah neighborhood of East Jerusalem. He then spoke on CNN and MSNBC. After these interviews, Israeli forces arrested him and forcibly removed Mohammed from Sheikh Jarrah. It was captured in a dramatic video shared widely on social media.

For more, we go to Jerusalem to speak with Mohammed El-Kurd, writer and poet in occupied Palestine, who is organizing to save his family’s home in the Sheikh Jarrah neighborhood of Jerusalem.

Mohammed, we spoke to you Monday. Describe what happened next.

MOHAMMED EL-KURD: Hi, Amy. Good to be back.

Yeah, I was standing in my neighborhood at night, and Israeli forces, while they were dispersing, violently dispersing, and suppressing the protesters and assaulting them and beating them, landed on me. And although they know that I live in the neighborhood, although they know my face, they forcibly took me out of the neighborhood. I would want to mention also that this has happened to me before, on the same day, in the morning, but there was no cameras to capture it.

I am unsure if this was targeted or not, or if this is because of what I said on national television. What I do know is that Palestinians are targeted constantly by Israeli violence, be they outspoken or not. So, for my Palestinian siblings, our silence will not protect us. We should all be speaking out against Israeli atrocities and [inaudible] —

AMY GOODMAN: But where were they taking you? They were taking you out of your home. I mean, there’s this other viral video of your twin sister who is telling a Jewish settler to leave your home. Where were these Israeli soldiers that we are showing now taking you?

MOHAMMED EL-KURD: They just threw me in the street and told me that I couldn’t come back into the neighborhood. And they’ve done this many times to us, many of my family members, many of my neighbors. They do this routinely.

NERMEEN SHAIKH: And could you talk also, Mohammed, about the reports of quite blatant collusion between settlers and Israeli security forces?

MOHAMMED EL-KURD: Thank God for social media, because not only in Sheikh Jarrah, in Haifa, in Lyd, in Jaffa, in the Gaza Strip, we are seeing the Israeli settlers emboldened by the Israeli state. And there are many videos that have surfaced of Israeli police officers assaulting Palestinians, and doing it with brute force, and doing it with aggression, doing it like they have a personal vendetta against them, which they do. It’s nothing short of terrorism. But again, like I said, thank God for social media, because it appears to me that the world is finally waking up to the fact that Israel is an apartheid state and it treats Palestinians with such dehumanization. It treats Palestinians the way colonizers treat the colonized.

NERMEEN SHAIKH: And also, as you point out, the role of social media, as a result, the whole world knows what’s going on. And there have been protests held in many cities around the world. What is the significance of solidarity from activists and others in these different cities, including many in Europe, as well as some in the U.S.?

MOHAMMED EL-KURD: Absolutely. I think those protests, that are in hundreds of cities, actually, are also spearheaded by Palestinians in the diaspora, much like the protests that are happening all across historic Palestine.

The first significance of these protests is that they’ve indicated to us that these colonial fragmentations that Israel has worked tirelessly, explicitly and implicitly, to implement within Palestinians, these tactics of intimidation, are not working, that we are all the Palestinian people, regardless of geography and regardless of, you know, legal status. We are all the Palestinian people, and we are rising up against this.

I also think grassroots people on the ground all over the world are realizing that they have the tools to end Israeli aggression towards Palestinians, to end the Israeli occupation once and for all, to end Israeli settler colonialism in Palestine. 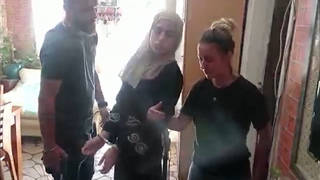