Hard-line cleric Ebrahim Raisi won the Iranian presidential election with about 62% of the vote. Raisi has headed Iran’s judiciary since 2019 and is seen as a protégé and possible successor of Supreme Leader Ayatollah Ali Khamenei. Turnout in the election was just 49% — the lowest since the 1979 Iranian revolution — and dozens of candidates were barred from running in the election, including former President Mahmoud Ahmadinejad. Raisi appears to “have higher ambitions than just [the] presidency,” says Nega Mortazavi, an Iranian American journalist and host of “The Iran Podcast.” “He is preparing to be a potential successor to the supreme leader,” Mortazavi says. “The hard-liners tried to disqualify any serious moderate or reformist rival to Ebrahim Raisi to clear a path to victory for him.”

StoryOct 06, 2022“Complete Dissatisfaction with the Current Order”: Why Mahsa Amini Protests in Iran Are Not Slowing Down

AMY GOODMAN: We begin today’s show in Iran, where hard-line cleric Ebrahim Raisi won Friday’s election with about 62% of the vote. He has headed Iran’s judiciary since 2019, is seen as a protégé and possible successor to Supreme Leader Ayatollah Ali Khamenei. Turnout was just 49%, the lowest since the 1979 Iranian revolution. Dozens of candidates were barred from running in the election, including former President Mahmoud Ahmadinejad. Raisi will take office in August, replacing moderate President Hassan Rouhani, who could not seek reelection after serving two terms.

Many Iranian analysts said U.S. sanctions and Trump’s maximum-pressure policy helped push Iran to the right. Raisi is currently under U.S. sanction for his role in the extrajudicial executions of thousands of political prisoners in 1988. At the time, Raisi was a member of what became known as the “death committee.”

Meanwhile, progress is being made to revive the 2015 Iran nuclear nuclear deal, which Trump abandoned three years ago. A sixth round of talks wrapped up in Vienna this weekend.

Joining us in Washington, D.C., is Negar Mortazavi. She is an Iranian American journalist, political analyst, host of The Iran Podcast.

Welcome back to Democracy Now! It’s great to have you with us. Can you talk about the significance of this election and exactly who Raisi is?

This is, as you said, the change of presidency in Iran. It’s essentially the country’s most important political event, because every eight years in the history of the Islamic republic we’ve seen a change of presidency, every two terms. And by past experience, this should have been the most exciting and enthusiastic event. Iranian presidential elections usually bring a high number of participation. It’s gone up to about 80% in some elections. But again, as you said, participation has been very low. There hasn’t been much enthusiasm.

The significance of this election, though, is that Ebrahim Raisi and the hard-line core of the deep state, the security forces, part of the IRGC who support him, seem to have higher ambitions than just presidency, as you said. He is preparing to be a potential successor to the supreme leader. The supreme leader was a president before he became a supreme leader himself, so this seems to be the stepping stone that the Raisi team has been planning.

AMY GOODMAN: And explain who ran and the significance of the low voter turnout, the lowest in decades.

NEGAR MORTAZAVI: Sure. So, Ebrahim Raisi ran along with four other hard-line candidates who weren’t a really serious challenge to the race, to him in the race. And any viable moderate or reformist who was seen as someone to be able to bring out the votes, it included even a centrist hard-liner, someone like Ali Larijani, who was disqualified because he was seen as someone — not a moderate himself, but as someone that the moderates may be planning to rally behind, create a coalition and create a serious challenge to Raisi. So, only one moderate, the former head of Iran’s Central Bank, a banker and an economist, who wasn’t really an exciting candidate, and one reformist, also not a very known reformist, Mehralizadeh — these were the two who were permitted to run against him, and one of them dropped out. And Hemmati was only able to bring a few million votes out.

And the same time, the phenomenon of this election was a lack of participation. As you said, this is the lowest turnout in the history of Islamic republic’s presidential elections. It’s unprecedented. There has been deep voter apathy, frustration, anger at the entire system, the country’s economic situation, which is also impacted by the triangle of sanctions — mismanagement, corruption and then also corona in the past year. So, there’s a sense of hopelessness among the population. Part of the population is disillusioned with any form of change from the ballot box. And there was also calls for boycott by Iranian exiles, part of the groups in — political groups inside the country. So, it seems like, overall, the hard-liners weren’t really going for high participation, but rather an easy win and a lack of challenge to Raisi’s election.

NEGAR MORTAZAVI: Sure. So, Raisi being a hard-liner and ultraconservative with a controversial past, the closest we can think of is the presidency of Mahmoud Ahmadinejad, the era that the nuclear negotiations did take place, but they didn’t really bring any result. This time around, even though the country’s foreign policy as well as domestic policy will be pushed more into a hard-line direction, the nuclear deal has a possibility of surviving, because this is an already-made deal. It exists on paper. So, the nuclear negotiations in Vienna are essentially for a return to existing deal, which was cut under the current president, Hassan Rouhani, together with President Obama. So, I have a sense that this deal has a chance of surviving. It was approved by the supreme leader. Raisi has recently said that he would support a nuclear deal.

And also, there are still a couple of months left until the actual change of presidency. So, if the current team in Tehran, with the negotiators, the U.S. negotiators, are able to bring it to the finish line before the actual change of administration, I think the deal will have a chance to survive. But any other diplomatic engagement between Tehran and the West, Europe and U.S., on other issues will be more complicated under a hard-line administration.

AMY GOODMAN: I want to turn to the outgoing foreign minister, Javad Zarif, who said the talks are progressing but that challenges remain.

MOHAMMAD JAVAD ZARIF: The problem is, the United States has to come to the recognition that it was the United States that left the deal with an objective, and that objective was not achieved. Now it is coming back to the deal, so it cannot dictate the objectives that it couldn’t achieve through economic war on the negotiating table.

AMY GOODMAN: And last month, dozens of Democratic officials wrote to President Biden asking him to revive the 2015 nuclear agreement with Iran and demanded the lifting of Trump-era sanctions, writing, quote, “The only result has been a vastly expanded Iranian nuclear program, increased regional instability, near U.S.-Iran war on multiple occasions, and severe economic sanctions that have contributed to a dire humanitarian crisis inside Iran.” Again, those are U.S. Democratic leaders. And if you can also talk about the effect of these sanctions — and, by the way, Raisi himself is under U.S. sanction — but the effect of these sanctions on the population, overall, in Iran, particularly around COVID?

NEGAR MORTAZAVI: Sure. So, sanctions have contributed to high inflation in Iran. They have really been crippling the Iranian economy. As said by the Democrats, they didn’t really bring any policy goals as were stated by the Trump administration, but they were successful in crushing Iran’s economy, bringing a higher rate of unemployment to Iranian youth, pushing a large number of the Iranian middle class into poverty, people who were essentially seen as change makers in the political scene becoming more concerned with bread, basically, making their ends meet. And sanctions have also contributed to a shortage of certain life-saving medicine.

And over the past year and a half with the COVID-19 pandemic hitting, sanctions have also been part of the reason to limit Iran’s fight against COVID. Iran’s fight against COVID hasn’t been the greatest. They haven’t been successful in containing the virus fully. But sanctions contributed to Iran’s lack of access to test kits, to personal protective equipment that was needed for health workers, and to other items, humanitarian items, that even though they’re supposed to be exempt from sanctions, but financial and banking restrictions basically hinder any form of trade with Iran, even if it is in the form of humanitarian trade.

So, the economic situation, overall, also helped create the sense of border apathy and disillusionment and any sense of hope for a better future, because part of the Iranian moderate and reformist camp were seeing that the experience was that they went ahead, they negotiated with the United States, and they resolved the nuclear issue — they made a deal — but the president, Trump, pulled out of that deal, and the economy went in shambles. So, that contributed to the lack of participation in the election and this result that we saw, which is the lowest voter turnout.

AMY GOODMAN: Well, Negar Mortazavi, I want to thank you so much for being with us, Iranian American journalist, political analyst, host of The Iran Podcast.

Next up, we go to Lima, Peru, where fears are growing that the daughter of Peru’s jailed former dictator will lead a coup, after her rival, the socialist teachers’ union president Pedro Castillo, declared victory in the presidential election. Stay with us. 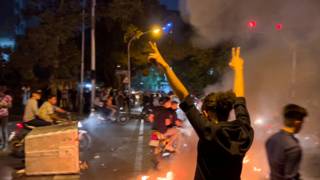 “Complete Dissatisfaction with the Current Order”: Why Mahsa Amini Protests in Iran Are Not Slowing Down