Criticism is growing of recent U.S. airstrikes in Iraq and Syria, which the Biden administration says targeted Iran-backed militias. Iraqi Prime Minister Mustafa al-Kadhimi condemned the attack as a “blatant and unacceptable violation of Iraqi sovereignty and Iraqi national security.” The U.S. airstrikes come as the Biden administration is holding indirect talks with Iran about reviving the Iranian nuclear deal. Jamal Abdi, president of the National Iranian American Council, says the U.S. needs to end its “constant tit for tat” with Iran across the Middle East. “By failing to pivot away from that and instead bombing targets inside of Iraq, we are giving more fuel to this conflict,” he says.

A U.S. military base near a major oil field in eastern Syria came under attack Monday, one day after the Biden administration launched airstrikes in Syria and Iraq targeting an Iranian-backed militia. Shortly before 8 p.m. local time, multiple rockets hit the U.S. base near the U.S.-controlled Al-Omar oil field. The U.S. responded directing artillery fire at nearby rocket launching positions.

This comes as criticism of the U.S. airstrikes grow. Iraq’s prime minister condemned the U.S. attack as a, quote, “blatant and unacceptable violation of Iraqi sovereignty and Iraqi national security,” unquote. A symbolic funeral was held today in Baghdad for four members of the Iraq Popular Mobilization Forces killed in the U.S. strikes. Syrian media is [reporting] Iran’s Foreign Ministry accused the United States of, quote, “disrupting security in the region.”

On Monday, U.S. Secretary of State Antony Blinken defended the U.S. military strikes, claiming they were done in self-defense.

SECRETARY OF STATE ANTONY BLINKEN: We took necessary, appropriate, deliberate action that is designed to limit the risk of escalation, but also to send a clear and unambiguous deterrent message. This action, in self-defense, to do what’s necessary to prevent further attacks, I think, sends a very important and strong message. And I hope very much that it is received by those who were intended to receive it.

AMY GOODMAN: The U.S. military airstrikes come at a time when the Biden administration is holding indirect talks with Iran about reviving the Iranian nuclear deal.

Welcome to Democracy Now! Can you respond to these attacks?

JAMAL ABDI: Well, you know, it’s hard to find something novel to say about the United States bombing Iraq at this point in time. We’ve been doing this for 30 years. But this comes at a time when the Biden administration has potentially the opportunity to pivot off of this track that was laid for them by the Trump administration, where they are engaged in this constant tit for tat and attempting to roll back Iranian influence and striking Iranian forces. And as we see, by failing to pivot away from that and instead bombing targets inside of Iraq, we are giving more fuel to this conflict. And instead of disincentivizing further attacks by Iran-linked groups, we see immediately retaliation. And this is how these things continue to bog the United States down in the region. And unless Biden is able to break out of this cycle, this is the norm that we’re going to be continuing.

JUAN GONZÁLEZ: And, Jamal, what is the Iraq Popular Mobilization Forces, and what is their connection, if any, to Iran? And also, what’s the status of U.S. troops in Iraq these days? How many are there?

And I don’t think it’s any coincidence that that was when the United States and Iran had a deal. We were at the diplomatic table, we had a nuclear agreement, and we actually started to see this trend reverse. Now we’re back in a state where we don’t have a nuclear agreement. We’re trying to get back to there. The U.S. is in Iraq but in a different role. And Biden supposedly wants to withdraw from the region or draw down from the region. And the failure of diplomacy, combined with the willingness to engage in these strikes to supposedly create a deterrent, but actually put a big target on our backs, is a very bad place to be. And it’s hard to see a way out of it, unless there is a diplomatic breakthrough.

PRESS SECRETARY JEN PSAKI: The targeted strikes were directed at facilities used by Iran-backed militias involved in these ongoing attacks for purposes including weapons storage, command logistics and unmanned aerial vehicle operations. So, Article II, the self-defense, the defense of the United States and our interests, is our domestic justification for the strikes announced yesterday. … The president’s view is that it was necessary, appropriate and deliberate action, these strikes, designed to limit the risk of escalation.

AMY GOODMAN: So, they’re saying — the U.S. is saying it was self-defense. But it’s also interesting that the airstrikes come two weeks after the House of Representatives voted to repeal the AUMF, the 2002 Authorization for Use of Military Force, which grants sweeping war powers to the president. What will this mean for the nuclear deal that supposedly is — President Biden is attempting to revive?

JAMAL ABDI: As you know, the talks to revive the nuclear deal are ongoing. We’re now in this awkward position where we have a lame-duck administration in Iran, who — the Rouhani government, who placed all of its political hopes and capital in the prospect of détente with the West and with the United States and getting this nuclear deal, to then have the rug pulled out from under it by Donald Trump, and now we are where we are today, where Iran is expanding its nuclear program and Iranians are suffering under sanctions, COVID, government mismanagement, and it’s a terrible situation.

The talks are ongoing, and I think that the talks may still yield a return to the deal. I don’t think that’s necessarily off the table. But I think these actions make it a lot more difficult and have a risk of poisoning the atmosphere there. That being said, you know, I do think that the Iranian supreme leader has signaled that he does want to get this deal, and the incoming president, the hard-line Ebrahim Raisi, has also, if not signaled his support for the deal, signaled that he will accept it.

And I think what really is going to determine whether that happens, it may be these negotiations with this outgoing sort of, quote-unquote, “friendly” administration in Iran, but it also may come under this new government. And the question then is: What does that then build towards? Is there further diplomacy that can happen? It does not look like that’s going to be the case.

I think, for Congress, you know, you hear a lot of voices from Congress criticizing these talks and saying, you know, either we need to not be talking to Iran or we need to seek this bigger and better deal that Donald Trump was trying to get. So, there’s no bigger, better deal on the table unless we return to these obligations. And I just think the fact that the Biden administration is using this legally dubious grounds for these strikes and keeping Congress out of that conversation — Congress is supposed to be authorizing the wars. They’re not involved, so they’re totally detached from the consequences of the failure of diplomacy. And so it’s very easy to cheerlead these strikes and to criticize diplomacy, for members of Congress who don’t actually have any skin in the game when it comes to having to authorize these strikes that are very unpopular among the American public.

JUAN GONZÁLEZ: I wanted to ask you also — this whole issue of self-defense. Given that the United — isn’t this the essence of how an imperial power operates? If you station enough troops around the world — and, of course, the United States has troops in scores of countries around the world — you could always claim self-defense of the United States, because you’re so extended in so many different parts that have really no direct relation to our own country.

JAMAL ABDI: Yeah, absolutely. And the U.S. presence in Iraq — I mean, going back to 1991, the U.S. presence in Iraq and the region have only put targets on the United States’s back and given rationalization to groups that want to see, you know, legitimately or illegitimately — you know, I let you decide — but want to see the United States out of the region. And that’s exactly what we’re doing. You know, counter to popular belief, Iran is not going to leave the region. They’re stuck there. They’re geographically stuck there. The United States isn’t. And the notion that we’re going to perpetually be, whether it’s having a large-scale troop presence there or even this more limited presence but continuing to engage in these deterrent strikes and this tit for tat, is going to lead to any new results just belies the past 30 years of history with the United States in the region.

AMY GOODMAN: Jamal Abdi, we want to thank you for being with us, and, of course, we’re going to continue to cover this, president of the National Iranian American Council.

This is Democracy Now! Next up, Vice President Harris did go to the border Friday, went to El Paso, Texas, but didn’t go to this massive emergency shelter for migrant children at Fort Bliss military base. The Border Network for Human Rights held a protest there with other groups yesterday demanding that the site for the children be shut down. Stay with us. 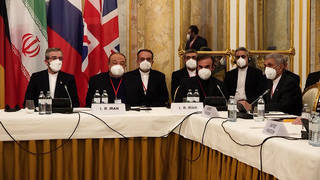