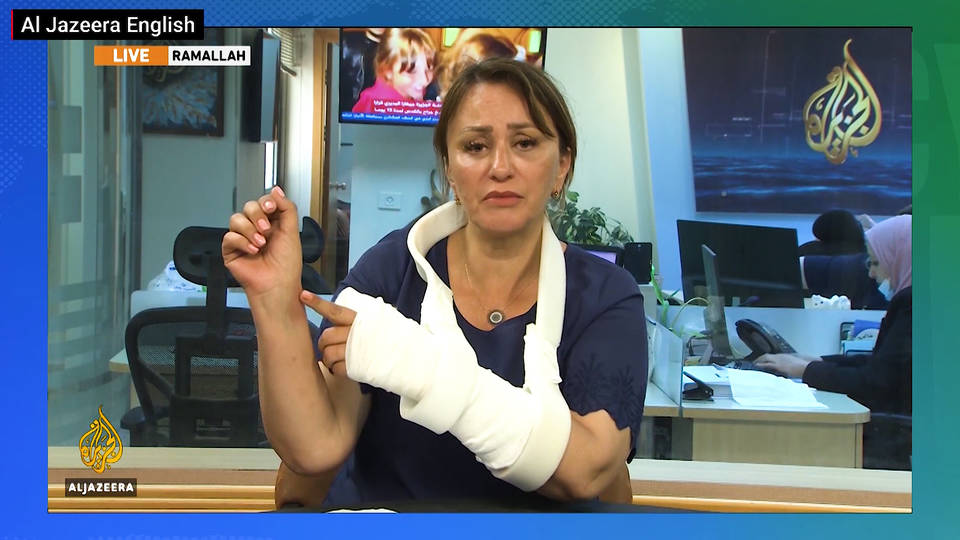 Israel is cracking down on Palestinians living in the occupied West Bank, occupied East Jerusalem and inside Israel. The newspaper Haaretz reports Israeli police have arrested nearly 2,000 Palestinians over the past month in an attempt to quell protests and uprisings against the occupation. On Saturday, Israeli police arrested Al Jazeera journalist Givara Budeiri as she covered a protest in Sheikh Jarrah. During the arrest, officers fractured her left hand and destroyed the equipment of her camera operator. She told Al Jazeera she was beaten while being taken to an Israeli police interrogation center.

Givara Budeiri: “They broke my hand. I spent all the night in the hospital. My back hurt me a lot. And here, my hand, from the cuffs, also they hurt so much, because the soldiers in the car were tightening it all the time. I have a headache. And my leg — I can’t walk very well.”

Al Jazeera denounced Budeiri’s violent arrest as a “crime against the journalistic profession.” The Foreign Press Association called it the “latest in a long line of heavy-handed tactics by Israeli police.”

Meanwhile, on Sunday, Israeli police in East Jerusalem detained Muna and Mohammed El-Kurd. The 23-year-old twins have been leading efforts to fight the forced expulsion of Palestinians living in the Sheikh Jarrah neighborhood of Jerusalem where their family lives. Jewish settlers already live in part of their home. We’ll have more from the Occupied Palestinian Territories later in the broadcast.