Finance ministers from seven of the world’s wealthiest nations have backed a plan to set a minimum global corporate tax rate of at least 15% on multinational companies. The agreement, which was reached during a meeting in Britain of the G7, or Group of 7, is “historic” but should have aimed higher, says economist Joseph Stiglitz. “If you have too low of a tax rate, that minimum tax becomes, de facto, the maximum tax,” he says.

AMY GOODMAN: Finance ministers from seven of the world’s wealthiest nations have backed a plan to set a global minimum corporate tax rate of at least 15% on multinational companies. The agreement was reached during a meeting in Britain of the G7. That’s the Group of 7. U.S. Treasury Secretary Janet Yellen praised the agreement.

TREASURY SECRETARY JANET YELLEN: G7 has taken significant steps this weekend to end the existing harmful dynamic, making commitments today that provide tremendous momentum towards achieving a robust global minimum tax at a rate of at least 15%. … That global minimum tax would end the race to the bottom in corporate taxation and ensure fairness for the middle-class and working people in the U.S. and around the world.

AMY GOODMAN: Oxfam criticized the G7 agreement, saying in a statement, quote, “It’s absurd for the G7 to claim it is 'overhauling a broken global tax system' by setting up a global minimum corporate tax rate that is similar to the soft rates charged by tax havens like Ireland, Switzerland and Singapore. They are setting the bar so low that companies can just step over it.”

For more, we go to Nobel Prize-winning economist Joseph Stiglitz. He’s a Columbia University professor, chief economist for the Roosevelt Institute, served as chair of the Council of Economic Advisers under President Bill Clinton and as chief economist of the World Bank. He recently wrote a piece in the Financial Times headlined “G7 leaders can strike a blow on global corporate tax.” He’s joining us from Cadaqués, Spain, the birthplace of Salvador Dalí.

Joe Stiglitz, thanks for joining us once again on Democracy Now!

JOSEPH STIGLITZ: Nice to be here.

AMY GOODMAN: So, why don’t you start off by talking about what the G7 agreed to and why you think it has failed in trying to hold corporations accountable?

JOSEPH STIGLITZ: Well, let’s be clear, it’s historic. We haven’t had agreement like this, a beginning of a change. But at the same time, it’s inadequate. They embraced some very useful language. They said “at least 15%.” France is arguing for higher than 15%, Oxfam. I believe very strongly — I’m part of an international civil society group that’s been looking at reform of the multinational tax system, and we argued for a minimum tax of 25%.

The danger is that if you have too low of a tax rate, that minimum tax becomes, de facto, the maximum tax, the actual tax. And that’s why Oxfam, for instance, has expressed a concern that the rate actually is not that different from some of the lowest rates in the world. On the other hand, what they forget is that the actual amount paid is not the official tax rate. You know, Google, Apple, all these companies, that produce the products that we love, also excel in tax avoidance. And the tax rate that Apple paid, for instance, in Ireland was not 12.5%, which is the official rate, but a fraction of 1%.

BRUNO LE MAIRE: [translated] There will be a taxation of tech giants. There will be a global minimum corporate tax in order to hinder the tax evasion and tax avoidance that rightly outrage our fellow citizens. It is in an ambitious agreement. The minimal rate that we’ve agreed upon in the corporate tax is at 15%. And I say it again: a minimum of 15%. It is a starting point. And in the coming months, we will fight for that global minimum corporate tax to be as high as possible.

JOSEPH STIGLITZ: I think he’s absolutely right. We should view this as the minimum of the minimum. We need a minimum tax rate; otherwise, there is this global race to the bottom that has been going on for a very long time. And what the G7 has done is begin to stop that race to the bottom. And it is going to be critical that Bruno Le Maire’s view, the view that I’ve taken, that it needs to be substantially higher than 15%.

There’s another provision in what the G7 did I want to call attention to, which is that it used to be very difficult — still is very difficult — for countries to tax the new digital giants, because there was a provision that said you couldn’t impose a tax if there’s not a physical presence in the country. These were rules that were made before the days of the internet, illustrating that the international tax framework for multinational is terribly broken. And what they’re beginning to do, again, totally inadequate, but at least it’s a start to ensure that the digital giants get taxed.

AMY GOODMAN: I wanted to ask you about this, pointed out in, among other places, The Guardian, experts raising concerns that Amazon may escape paying significantly more tax in some of its biggest markets, unless world leaders close a large loophole in a historic global deal. A communiqué from ministers suggests the deal only applies to profit exceeding a 10% margin, which could rule out Amazon.

JOSEPH STIGLITZ: Well, I think that whole framework of saying that the rules only apply to — actually, only 20% owe the profits in excess of 10% [inaudible]. The fact is that the corporate profits are all, you might call, excess profits, monopoly profits, because you allow the deduction of capital cost, of labor cost, of any other cost. So these are what economists call pure profits, monopoly rents. And all of them should be subject to the new kinds of rules. So, again, like the minimum tax, it can only — the positive side is to see this as a beginning in an arena in which getting any agreement has really been very, very difficult.

AMY GOODMAN: And finally, back in the United States, I don’t know how much attention you’re paying to what’s happening here at the moment, but Biden proposing scrapping his plan to raise the corporate tax rate if Republican lawmakers support at least a trillion new dollars in infrastructure spending. He had previously called for rolling back Trump’s corporate tax cuts by increasing the rate from 21 to 28%.

JOSEPH STIGLITZ: Well, I think Biden’s initial proposal was absolutely right. And as I and others have emphasized, raising the corporate income tax is a matter of equity, but it’s also a matter of efficiency. The fact is that when the tax was lowered from 35 to 21%, it didn’t lead to more investment; it just led to more share buybacks. Raising the tax from the current level of 21 to 28% is not going to adversely affect investment, particularly if we can get global cooperation so that there aren’t these incentives for moving investments abroad, because the tax rate — the tax structure allows the deductibility of investment, including [inaudible], as we’ve seen. So, I’m very disappointed that they are thinking — even thinking — about giving up on this important provision.

AMY GOODMAN: Joe Stiglitz, I want to thank you for being with us, Nobel Prize-winning economist, Columbia University professor, chief economist at the Roosevelt Institute, former chair of the Council of Economic Advisers under Bill Clinton and chief economist formerly of the World Bank. We’ll link to your Financial Times piece, “G7 leaders can strike a blow on global corporate tax.”

Coming up, we look at how the Biden administration placed a gag order on The New York Times as the Department of Justice waged an effort, started under Trump, to obtain the email records of four Times reporters, coming up.

AMY GOODMAN: “We Shall Overcome,” sung by the legendary singer and activist Joan Baez, who was celebrated along with a number of others at the 43rd Kennedy Center Honors during a ceremony broadcast Sunday night that also showed Democratic Senator Joe Manchin singing along to the civil rights anthem. Manchin said Sunday he plans to vote against the sweeping voting reform measure, the For the People Act. Baez attended the ceremony with Capitol Police officer Michael Fanone as her special guest. Baez said in January of the Honors, quote, “It has been my life’s joy to make art. It’s also been my life’s joy to make, as the late Congressman John Lewis called it, 'good trouble.' What luck to have been born with the ability to do both; each one giving strength and credibility to the other,” Joan Baez said. 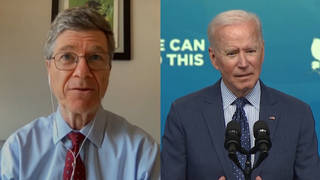 “We Are a Plutocracy”: Jeffrey Sachs Slams Biden for Offering to Preserve Trump’s Corporate Tax Cuts