“He Was Defeated”: Ethiopian PM Withdraws from Tigray After Months of Civil War, as Famine Looms

The Ethiopian military has withdrawn its forces from Mekelle, the capital of the war-torn Tigray region, after the government declared a ceasefire. Prime Minister Abiy Ahmed denied reports his military was defeated by Tigrayan forces, and said he had successfully pacified the city. Ahmed, who won the Nobel Peace Prize in 2019, launched the offensive against Tigray separatists in November. Since then, thousands have been killed, over a million civilians have been displaced, and some 350,000 people are now on the brink of famine. Alemayehu Fentaw Weldemariam, a constitutional law scholar, political theorist and conflict analyst, says Prime Minister Ahmed’s “unilateral” ceasefire hides the reality of what happened. “He was defeated,” he says. We also speak with Stanley Chitekwe, chief of nutrition at UNICEF Ethiopia, who says the organization is seeing “very high levels of malnutrition” in Tigray, including among children under 5. “This malnutrition situation may deteriorate into famine,” he warns.

Earlier this week, the Ethiopian military withdrew its forces from Mekelle, the capital of the war-torn Tigray region, after the government declared a ceasefire. Prime Minister Abiy Ahmed denied reports his military was defeated by Tigrayan forces, and offered another reason for the retreat.

PRIME MINISTER ABIY AHMED: [translated] When we entered Mekelle seven or eight months ago, it was because it was the center of gravity for the conflict. It was center of a government, a center for known and unknown resources. But by the time we exit, there’s nothing special about it.

AMY GOODMAN: The Ethiopian prime minister is a Nobel Peace Prize winner. He has come under fire for his response to the conflict, that erupted in November when the Ethiopian government launched an offensive against Tigray separatists. Since then, thousands have been killed, over a million civilians have been displaced, some 350,000 people are now on the brink of famine. Abiy has denied there’s hunger in Tigray, but the United Nations says it’s the worst malnutrition crisis in a decade and it’s projected to get worse without urgent aid and unhindered access to those in need. The U.N. says multiple parties in the conflict may be guilty of violating international law, possibly amounting to war crimes and crimes against humanity, including indiscriminate killings and sexual violence, using rape as a weapon of war.

Meanwhile, results are expected soon from last week’s parliamentary and regional elections that will determine whether Abiy Ahmed will remain in power.

For more, we’re joined by two guests. In Addis Ababa, Stanley Chitekwe is with us, the chief of nutrition at UNICEF Ethiopia. In Washington, D.C., we’re joined by Alemayehu Fentaw Weldemariam, constitutional law scholar, political theorist and conflict analyst, previously served as a national peace adviser to the Ministry of Federal Affairs, currently lectures at Mekelle University School of Law. He is also political commentator for Ethiopia Insight.

We’re going to turn to you first, Alemayehu Fentaw Weldemariam. Thanks so much for joining us. Can you talk about the significance of this ceasefire, why it happened, and all this in the context of the elections and the famine that could engulf this area of Tigray?

ALEMAYEHU FENTAW WELDEMARIAM: Thank you, Amy, for having me.

I think one thing that we need to be very clear about the unilateral truce is that there isn’t such a thing as unilateral truce, especially in this context in which the prime minister declared unilateral ceasefire. He was defeated. In the past two weeks, massive counteroffensive was happening, was mounted against the Ethiopian National Defense Forces by the Tigrayan Defense Forces. They were able to throw out several divisions of the NDF. So, it’s after this defeat that the federal government said it has called for a unilateral truce.

So, as to its significance, the significance is also something that the international community, as well as the people of Tigray, need to be vigilant about, because even if what the — I mean, if the truce was honest, the Ethiopian government would also tell its allies, the Eritrean forces and the Amhara regional forces, to withdraw from territories, Tigrayan territories, that they have occupied since the start of the war in November, on November 4, 2020. So, this is going to be a very — a prelude to the ultimate showdown between Amhara and Tigrayan forces on those western and southern territories of Tigray. And that will be very destructive.

NERMEEN SHAIKH: And, Alemayehu, you anticipated this conflict as early as 2018. Can you explain why you thought this violence would break out? And also, if you could give some context as to the origins of this war, the historical origins of it?

ALEMAYEHU FENTAW WELDEMARIAM: So, Ethiopia has been teetering on the brink of civil war for quite some time, since the coming to power of the new prime minister in April 2018. The prime minister had this extraordinary talent for trickery and fraud. So, one of the very first things he did, in the very first few months after coming to power, was, in contravention of the Constitution, to give the marching order to the National Defense Forces to intervene in the Somali region of Ethiopia to remove its leader. So, now that — it has come full circle. It started out in Somalia, in the Somalia region of Ethiopia, by removing the leader. I mean, the regional leaders might be responsible for some heinous human rights violations, but the constitutional procedure for armed intervention in the internal affair of a region, a region which is a member of the federation, has not been followed. So, what he did also was he played the same — he played the same political theatrics, legal and political theatrics. They put on a show of constitutional interpretation, which prohibited — which postponed — in effect, postponed the national and regional elections and banned Tigray region from — explicitly, from holding its regional elections for its regional State Council, knowing that the region would really defy and go ahead. And that’s exactly what happened.

AMY GOODMAN: I wanted to bring —

ALEMAYEHU FENTAW WELDEMARIAM: Because, you know, you cannot tell — yeah.

AMY GOODMAN: I wanted to bring Stanley Chitekwe in, from Addis Ababa, the capital of Ethiopia, the chief of nutrition, UNICEF Ethiopia. As we talk about the situation here, the ceasefire in the midst of the elections, you are dealing with, and the people of the Tigray region, Ethiopians in the war-ravaged Tigray region, are facing the world’s worst famine in a decade. Can you describe what’s happening there and what has to happen, Stanley?

STANLEY CHITEKWE: Yes. Thank you for having me.

We are seeing very high levels of malnutrition among children under the age of 5 years of above 15%. That is wasting. And this is considered to be very high. Malnutrition among pregnant and lactating women ranges from 40 to 50%. Again, this is very high, with potential long-term impact. And pre-crisis, pre-the conflict, we realize also that Tigray region had already a very high level of malnutrition. Stunting, stunted growth among under 5s was already 10 percentage points above the national average. Wasting also was about 2 percentage points above the national average.

And the latest study has shown that, on food security, we have about 5.5 million people that are in a range which we call from IPC 3, 4 and 5. So this is a very high proportion. And the report of looming famine comes from the fact that if certain risks are not removed — and there are mainly two risks that we are talking about: number one, continued conflict, as well as, number two, limited access to provide humanitarian access — this malnutrition situation may deteriorate into famine.

NERMEEN SHAIKH: Stanley, what do you think urgently needs to be done? What are you calling on the international community to do to alleviate famine conditions in the region and also humanitarian access reaching the people who need it most?

STANLEY CHITEKWE: Yes. There are three elements that we know are very critical. Number one is to do with access. We know the conditions and situation are changing very rapidly. But as until now, we know that there were about 29 districts, out of 93, that were hard to reach. And there were about 39 that were partially accessible. And out of the 93, we only had 21 districts that we had full access. So access is a very strong precondition.

Number two, we also realize that capacity is an issue. The extent of the challenge of malnutrition and food insecurity is so huge. There’s need to ramp up support, in terms of the capacity of the implementers, U.N. agencies, NGOs. We need more human resources, more materials to be able to respond, food, and specialized foods that we use to treat severely malnourished children. So, we are talking about need for additional capacity.

And then, resources. By resources, we are also talking about financial. A number of sectors, be it nutrition, food security, water, we are ramping up our response in order to reach people as quickly as possible, within the next 30 to 60 days, to avoid the looming famine. So, there’s need for additional financial resources from our generous donors.

AMY GOODMAN: Stanley Chitekwe, who’s getting in the way of people getting access to so much needed aid?

STANLEY CHITEKWE: I think, up until now, there were three entities. And it’s not always very clear which entity is making this. I think the main thing is that when there’s conflict, when there’s exchange of fire, it is not possible for humanitarian workers to find a safe corridor. So, access is also an issue of perception, in terms of where you see there’s an exchange of fire. It is impossible for our humanitarian workers to access those places. So, ceasefire is a precondition for access.

AMY GOODMAN: We want to thank you both for joining us. We’ll continue to follow the situation on the ground. Stanley Chitekwe, chief of nutrition, UNICEF Ethiopia, speaking to us from the capital, in Addis Ababa, and Alemayehu Fentaw Weldemariam, constitutional law scholar, political theorist and conflict analyst. 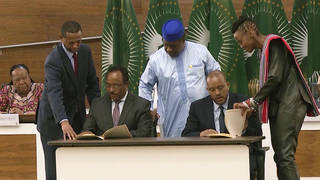