After a federal judge struck down DACA, or Deferred Action for Childhood Arrivals, we look at what may come next with Cesar Espinosa, a DACA recipient and executive director of the Houston, Texas-based, immigrant-led civil rights organization FIEL. He says the latest ruling is “heartbreaking,” and urges lawmakers to create a legislative solution for the millions of undocumented immigrants in the U.S. “We want to see Congress and the president take action.”

AMY GOODMAN: This is Democracy Now! I’m Amy Goodman, with Juan González, as we end today’s show looking at the latest attack against immigrant communities. On Friday, a federal judge in Texas struck down DACA. That’s Deferred Action for Childhood Arrivals. The order does not affect current recipients, for now, but blocks the Department of Homeland Security from approving any new applications. At least 80,000 first-time DACA applications pending with U.S. Citizenship and Immigration Services are now in limbo.

DACA has provided temporary protection from deportation and work authorization to over 800,000 undocumented people who were brought to the U.S. as children. In his ruling, Judge Andrew Hanen, who was appointed by former President George W. Bush, said the program exceeded President Obama’s authority when he created DACA through executive action in 2012. President Biden vowed his Justice Department will appeal the ruling.

For more, we go to Houston to speak with Cesar Espinosa, DACA recipient and executive director of the Houston, Texas-based, immigrant-led civil rights group FIEL, which is the Spanish acronym for Families of Immigrants and Students in Struggle. He himself is currently a DACA recipient, has lived in the U.S. for nearly three decades.

Cesar, it’s great to have you back. Can respond to the judge’s ruling and what this means?

CESAR ESPINOSA: Well, number one, thank you for having us.

I mean, it really is — was heartbreaking to hear the news, after some time that we hadn’t had any news on DACA, any negative news on DACA, that we were kind of just coasting along, helping new recipients apply. All of a sudden, on a Friday afternoon, we get this really bad ruling from a judge, which obviously dampened our spirits, but also relit the fire for us to fight for a more permanent solution for DREAMers and our families.

JUAN GONZÁLEZ: And, Cesar, what does this mean, especially in terms of the fact that the DACA recipients have to reapply? Even those that are already benefiting from it have to reapply every two years.

But for current DACA recipients, there’s two major things that are happening here. Number one is the fact that we have to live our lives two years at a time, at the expense of another court ruling or whatever politics is happening in the country at a time. And number two, for many people who are struggling after the pandemic, who may have lost a job, they are really struggling to come up with the money to have to repay every two years the $495.

JUAN GONZÁLEZ: And could you talk a little bit more about what it’s like as a DACA recipient day to day, dealing with planning for your future?

CESAR ESPINOSA: I mean, it really is — we’re really in limbo. For many of us, we have put our lives on hold. We have right now the other issue, which is USCIS is taking a very long time to process applications. And so, we have DACA recipients who may have great jobs, who may be teachers or doctors or nurses, but because there’s a backlog right now in USCIS, they’re not getting their work permits in time, and they’re getting laid off or they’re being let go from their jobs.

But just on a personal level, it really is heartbreaking. I recently got married, and my wife is constantly worried about what our future is going to be like, if I’m going to be able to be in this country. I am currently also waiting for my DACA to be renewed, and she is very fearful of me even doing mundane things like driving to work and being — and just being here in this country. So, we really need to find a permanent solution for DACA recipients, but not only DACA recipients, but TPS holders and all the people who are living our lives two years at a time.

AMY GOODMAN: During President Biden’s remarks on the economy at the White House yesterday, he was asked about the whole issue of DACA and immigration reform.

REPORTER: At what point would you consider inflation unchecked to a point at which you would either consider taking action or you would want to see the Fed takes action? And secondly, why do you believe that the budget bill is appropriate legislation for a pathway to citizenship?

PRESIDENT JOE BIDEN: Well, first of all, I think we need to find pathways to citizenship. The budget bill is an appropriate way to get around the filibuster to be able to make a judgment as to whether or not they should have a pathway. That’s for the parliamentarian to decide, though, not for Joe Biden to decide.

AMY GOODMAN: So, that’s President Biden yesterday. Cesar, what exactly does this mean? What would a path to citizenship look like that would apply perhaps not only to students and workers, but to all immigrants?

CESAR ESPINOSA: Well, number one, we want to see Congress and the president take action. President Biden said — one of the things he said during his campaign, or one of his campaign promises, was that he was going to act on immigration in the first 100 days of office. The hundred days have been up, and people are struggling right now to make ends meet. And not only that, but also always in the back of their mind is the fact that they can be deported.

For immigrants, in general, it would be a life-changing opportunity to be able to come out of the shadows, to be able to fully integrate into U.S. society and to live a life free of fear, free of the constant fear that you may just be working, and for some reason, one reason or another, you’re going to be stopped by police and subsequently be deported. So, for many people, it would be life-changing.

It would also be a huge stimulus to the economy, because you would have more people paying into the system. I guarantee you that people would want to go back home to their countries, fly back home, and that would provide a lot of needed stimulus for our economy.

So there’s many, many reasons to pass comprehensive immigration reform. But more importantly is the fact that our parents and our — are the folks who brought us here, have given this country their entire lives. I’ve been here for 30 years. My parents have worked very hard. And so, all we ask is that they be treated humanely and that they get a pathway to what we believe is what they deserve.

JUAN GONZÁLEZ: And, Cesar, how would, in terms of — practically, in terms of the road ahead, clearly the Supreme Court is not going to be charitable when it comes to the issue of the DREAMers, now given the 6-3 conservative majority. And there is such a close edge or slim edge of the Democrats in the Senate and the House. What do you see as the best road forward for getting some kind of relief for DACA recipients and for others who are undocumented?

The other thing is that it’s important for us to call. For folks who are not DACA recipients, who are not immigrants, you know, get on the phone and talk to your legislators and tell them that you believe that we need a pathway to citizenship for all people. And at the end of the day, we just want to make sure that we get a bill passed, and we get a bill passed, at least a temporary bill, that would allow people to get work permits and to be able to be here free of the fear from deportation. And then we can work on a pathway to citizenship in a different side, in a different approach.

AMY GOODMAN: Cesar, we just have 30 seconds, but you’re also participating in a study of and outreach to Latinx population of Houston around COVID. What are you finding?

CESAR ESPINOSA: We did a groundbreaking study on people’s reserve when it comes to the vaccine. Folks can look at it at FIELHouston.org/COVID19. They can download that study. And what we are hoping is that this can help government officials make better decisions when it comes to outreach our community, because what we realize is that people — or, what we found out is that our community is not just — nobody is talking to us. And we need that to happen in order for us to have a stronger and more reliable community.

AMY GOODMAN: Cesar Espinosa, we want to thank you so much for being with us, a DACA recipient himself, executive director of the Houston, Texas-based, immigrant-led civil rights group FIEL.

And that does it for our broadcast. Democracy Now! is currently accepting applications for our video production fellowship and our digital fellowship here in our New York City studio. Learn more at democracynow.org. I’m Amy Goodman, with Juan González. Stay safe. 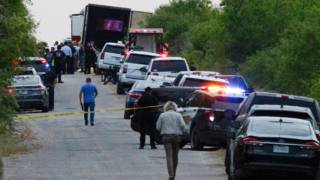