We get an update from Les Cayes, Haiti, not far from the epicenter of Saturday’s earthquake, as Tropical Storm Grace drenched parts of the country and the death toll has now climbed to more than 1,400, with nearly 7,000 suffering from injuries amid overwhelmed hospitals. The impact from the latest earthquake is “just as great” as the devastation from the 2010 earthquake, says Jacqueline Charles, Haiti and Caribbean correspondent for the Miami Herald. “Haitians are not sitting around and waiting for international aid. They’re not waiting for their national community to come and rescue them,” Charles says, noting the presence of many makeshift hospitals despite medical supply shortages. She also describes how Haiti is is grappling with the aftermath of the assassination of Haitian President Jovenel Moïse.

AMY GOODMAN: This is Democracy Now!, democracynow.org. I’m Amy Goodman, as we turn to Haiti, where heavy rainfall from Tropical Storm Grace drenched the same parts of the country Monday hit by Saturday’s earthquake, where the death toll has now climbed to more than 1,400, and 7,000 suffering from injuries amidst overwhelmed hospitals. Thousands more have been left homeless. Doctors treated hundreds of injured people in makeshift tents, including young children and the elderly.

Meanwhile, the investigative judge charged with overseeing the multinational probe into last month’s assassination of Haitian President Jovenel Moïse stepped down on Friday, saying he’s concerned for his safety after one of his court clerks was found dead.

These are some of the survivors.

BEAUCHAMP JOSEPH DANIEL: [translated] My wife called me to have a coffee with her, when the quake hit. We were talking, and I heard a sound. We tried to get out quickly, but the stairs were destroyed. But thanks to God, we were able to get out, against the force of nature. Nobody could save us but God.

PASCAL MARIE VERNISE: [translated] My house is completely destroyed. I have lost everything. I don’t even have bed sheets. I have no food. I have nothing.

SURVIVOR: [translated] We were in our home when the quake happened. A number of people who were inside could not escape. The elderly were under the rubble. My father’s two legs broke, and my mother-in-law has broken a leg. On the day of the quake, we went to the hospital with them, but there weren’t enough medics to treat them. They are suffering. I don’t know what to do.

AMY GOODMAN: We’re joined right now by Jacqueline Charles. She is the Haiti and Caribbean correspondent at the Miami Herald. She has reported on Haiti and the English-speaking Caribbean for the Miami Herald for over a decade. She’s a Pulitzer Prize finalist for her coverage of the 2010 Haiti earthquake, awarded the 2018 Maria Moors Cabot Prize, the most prestigious award for coverage of the Americas. She’s right now in Les Cayes, Haiti, not far from the earthquake’s epicenter.

Can you describe, Jacqueline, what you have seen as you’ve traveled through the earthquake-hit area?

JACQUELINE CHARLES: Well, when you travel through this area, I mean, you see homes that may look like they’re OK, and then, when you take a second look, you will see that the bottom of the house is completely collapsed, or you see where the whole house has collapsed. This is an area that is agricultural. There are a lot of plains. So the houses are not right up under each other like we had in Port-au-Prince. It’s not teeming. So, visually, the devastation, of course, is different from what we saw in that 2010 earthquake, but the impact is just as great, because these are individuals who were still in the process of rebuilding from Hurricane Matthew just five years ago, and now they’ve basically lost their homes.

People are afraid to sleep in buildings, you know, so they’ve been sleeping in their yards. And, of course, last night we had Grace that came in here, and now people are sort of losing patience, because they don’t have tents. They were just using sheets and whatever they could, some not even that. They were just exposed to the elements. And they had to choose between the aftershocks or the rain.

AMY GOODMAN: What was your response when you first heard 7.2 category on the Richter scale, this earthquake?

JACQUELINE CHARLES: Oh my god. So, you know, I had just been in Haiti for an entire month, following the assassination of President Jovenel Moïse, and I literally had just gotten off of a plane that morning. And when I heard that, I was just — it was like, “Oh my god, here we go.”

And, of course, you know, having covered the earthquake — I just did a project last year, 10 years after — we knew that there was going to be a big one, another big one. But we always assumed that it would be in the north of the country. And the fact that this happened in the south, it took a lot of people by surprise. So, the first thing you’re thinking about is where and in terms of the death toll and the damage. You know, what are we going to find, given that we know that 7.0, just 11 years ago, almost wiped out Port-au-Prince?

AMY GOODMAN: So, among the dead are the mayor — the former mayor of Les Cayes, Gabriel Fortuné?

JACQUELINE CHARLES: Yes, Gabriel Fortuné, the former mayor of Les Cayes, who was also an adviser to the assassinated president, Jovenel Moïse. He’s also a former senator, a very huge figure. He was in his hotel. We understand that there was a meeting going on, and, yes, he died in the rubble. He was among seven individuals that — well, four individuals who were taken to a local hospital just to confirm that they had died. And that was probably the biggest news in terms of the deaths. But we have three suicides. We’ve got, you know, community leaders — I mean, the same thing that we saw in 2010: Everybody has a story about someone.

Yesterday I visited the business owner of a supermarket in a hotel, and two of his employees died. I spoke to a security guard, and she’s still crushed. You can still smell the stench of death there, even though they had retrieved the bodies. But I understand that one of them, it was just — it was body parts. And it was, you know, one of — the other person who died was her fellow security guard, whom she had just relieved at 6:00, and this quake happened at 8:30 a.m.

AMY GOODMAN: So, if you can talk about the hospitals and the needs right now?

JACQUELINE CHARLES: You know, one of the things that we saw before, and we’re seeing it today, is Haitians are not sitting around and waiting for international aid. They’re not waiting for the international community to come and rescue them. They are doing it on their own, but they’re doing it in a situation where they lack even bandages, medical tape, anesthesia, IVs.

Every day, people are coming with injuries. Some have tried to just wait it out, because they don’t have the means for transportation or they think they have to pay. And so, the hospitals have been overwhelmed, but they seriously lack medical supplies. Because of the situation at the entrance, the southern entrance of Port-au-Prince, with the gangs, people in Port-au-Prince who would like to come and provide assistance, they can’t do it for fear of that road. It’s not easy getting into this region because of the humanitarian plight, and there are also a limited number of flights. But there is a huge need in the hospitals here.

And again, some of these hospitals have been damaged, so they are basically turning their courtyards into makeshift hospital wards. One hospital, the doctor’s residence is now an operating room. They’ve done — they themselves have done over a hundred operations. But because there’s so many fractures, bone fractures, they lack even the iron that they’re needed to repair a lot of these injuries.

AMY GOODMAN: And before we go, I mean, this happening in the midst of a political earthquake. I mean, you have the assassination of the Haitian president, Moïse, and you have the judge presiding over the investigation quitting because one of the court clerks was just found murdered.

JACQUELINE CHARLES: This court clerk was found murdered just days earlier. And, yes, he withdrew from this investigation a day before this earthquake. He’s concerned about his safety. We still have the unresolved issue in terms of the president’s brazen assassination in the middle of the night. His wife is seriously wounded. Forty-four people have been arrested. The police still have not identified the mastermind of this crime or the motive. And so, that is still very much a huge issue.

And we have to remember that the president was one of 11 elected officials in a country of 11.5 million. So there’s been this pressure from the United States and others for Haiti to hold elections. At the Miami Herald, we spoke with Prime Minister Ariel Henry. And he basically said, as of right now, there is no electoral calendar. On top of the fact that he needs to get some sort of a political accord, get everybody on board and say, “This is the way we need to go” — and he is determined to have elections; “You cannot be a democracy without elections,” is what he said — but you now have this disaster, which he has declared a month state of emergency to try to address.

And we still don’t know yet in terms of what damage was done as a result of Grace, you know, because of the rains. This is an area that’s very prone to mudslides. I have to tell you, yesterday, there were huge boulders in the roads. There’s the road to Jérémie, which is the other area which was also affected. That road has been cut off, because the boulders in the road have been split and cut.

So, we’re going to basically go out now. We understand that they’ve sort of halted some of those assessments because of the — the weather continues to deteriorate. And so, we may be looking, you know, at more needs in just a few hours.

AMY GOODMAN: Well, Jackie Charles, please stay safe. Jacqueline Charles is the Haiti and Caribbean correspondent at the Miami Herald. And we’re going to link to all of your reporting at democracynow.org. She’s talking to us from Les Cayes, near the epicenter of the earthquake. 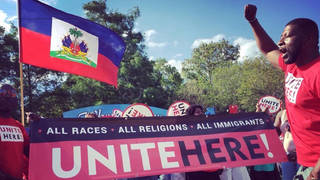