Longtime diplomat Daniel Foote, the U.S. special envoy to Haiti, has resigned in protest over the Biden administration’s mass deportation of Haitian asylum seekers and meddling in Haiti’s political affairs. The resignation comes days after U.S. Border Patrol agents on horseback were filmed chasing, grabbing and whipping Haitian asylum seekers who had gathered in a makeshift camp in Del Rio, Texas. “I am outraged,” says Maxine Waters, a Democratic congressmember from California who is a longtime advocate for the rights of people in Haiti. She says refugees must be able to seek asylum in the U.S. without such “inhumane” treatment, and urges the Biden administration to do more to protect vulnerable people. “The United States can do better than this,” Waters says.

The U.S. special envoy to Haiti has resigned in protest over the Biden administration’s mass deportation of Haitian asylum seekers. In a letter, the longtime diplomat, Daniel Foote, wrote, quote, “I will not be associated with the United States’ inhumane, counterproductive decision to deport thousands of Haitian refugees.”

Foote’s resignation came just days after U.S. Border Patrol agents on horseback were filmed chasing, grabbing and whipping Haitian asylum seekers who had gathered in a makeshift camp in Del Rio, Texas. The New York Times reports the Biden administration has now deported nearly 2,000 Haitians in recent days. About 3,000 Haitian asylum seekers remain in the makeshift camps under the International Bridge in Del Rio, while thousands of others have been allowed to stay in the United States.

This is Democratic California Congresswoman Maxine Waters, chair of the House Financial Services Committee, longtime advocate for the rights of the people in Haiti, speaking outside the Capitol.

REP. MAXINE WATERS: What the hell are we doing here? What we witnessed takes us back hundreds of years. What we witnessed was worse than what we witnessed in slavery: cowboys, with their reins, again, whipping Black people — Haitians — into the water, where they’re scrambling and falling down, when all they’re trying to do is escape from violence in their country.

Can you respond to what we have watched this week, the whipping of Haitian asylum seekers on the U.S. side of the border by U.S. Border Patrol? What are you demanding?

I am outraged. And I’m demanding that, first of all, they take the cowboys out, take the horses out and stop using them against the people. Secondly, we’ve got to come up with real immigration reform.

Meanwhile, we’ve got to treat the Haitians the way the Constitution allows us to have people, you know, petition for amnesty, to be able to get — for asylum, I’m sorry, asylum in our country. We’re not allowing them to go through the constitutional process. We are not protecting them in any way. We are not doing what we can to help those who are under that bridge.

AMY GOODMAN: You know, in the last months, the Biden administration granted a new temporary protected status, or TPS, designation to Haitians already living in the U.S., to protect them from deportation for at least 18 months. At the time, Secretary of Homeland Security Alejandro Mayorkas cited Haiti’s political and economic crises, human rights abuses and other security concerns, the pandemic, shortages of food, clean water and healthcare, as reasons for extending the TPS protections for Haitians. In a statement, he said, quote, “After careful consideration, we determined that we must do what we can to support Haitian nationals in the United States until conditions in Haiti improve so they may safely return home.”

Now, that was before all of this. But now the Biden administration is blocking the Haitian asylum seekers from entering the United States to apply for refuge, and instead mass deporting them, thousands of them, not to mention the whipping of them. Yesterday there was breaking news. I thought they were going to say they’re going to stop the deportations, in line with their previous policy, but instead they said they won’t use the men on horseback whipping the Haitian asylum seekers anymore.

You mentioned in your opening that the special envoy quit, after having only been appointed just a few months ago. And he said he was in disagreement with this administration’s policy. And I don’t think he would have done that unless he understood, having talked with those in the State Department and others, that they have no intentions of doing the right thing by Haiti.

And so, we’re in an awful situation, a situation that we find ourselves in which adds to the undermining, the disrespect, the, basically, hatred of Haitians, not only by the United States in the way that we have treated them historically, it’s also by Canada and France. They have just been the victims of all of these countries for years and taken advantage of and exploited. And they do not intend to have the kind of — well, they — we have not been able to get the United States to support credible governance. They will go along, we will go along, with whomever and whatever happens in Haiti.

And so, we’ve got to do better than this. I don’t know where this administration is going with this, but I’m going to do everything that I can to prod them. I intend to talk with Mayorkas today. He was absolutely correct in the way that he articulated the policy. I think that is a humane policy that he had articulated, but it doesn’t seem to be what they’re following.

AMY GOODMAN: So, I want to ask you about NBC News reporting that the Biden administration is advertising for a new contract to operate a migrant detention facility at the U.S. naval base at Guantánamo Bay, Cuba, with a requirement that some of the guards speak Spanish and Haitian Creole. A little-known immigrant holding facility on the base has a capacity of 120 people. The contract would allow it to hold, quote, “up to 400 migrants in a surge event.” As many as 12,000 Haitians were sent to Guantánamo during the George H.W. Bush administration from ’91 to ’93, when they sought to flee Haiti to seek asylum in Florida. Are we really going to see a reprise of this, Congressmember Waters?

REP. MAXINE WATERS: Well, you have more information than I have about that. And if, in fact, that is what is happening, we know what Guantánamo has been used for in the past. I don’t know where this administration is going, whether it’s talking about continuing to deport and send some to Guantánamo, allow some to come in United States. I don’t know what the policy is. And so, that’s what —

AMY GOODMAN: Well, let me ask you about what the White House is saying. This is the Press Secretary Jen Psaki, questioned on the Biden administration’s ongoing mass deportations of Haitian asylum seekers.

PRESS SECRETARY JEN PSAKI: First of all, they’re not deportations. People are not coming into the country through legal methods. And again, our policy process has continued to be the same with Haiti as it is for anybody coming through in a — for the regular migration across our border.

AMY GOODMAN: So, if you can respond to this? I saw some Haitians deported back to Haiti — the reason why Ambassador Foote has quit — talking about their hands been shackled to their waist, and their feet shackled, as well. You couple this with the whippings of Haitians — we’ve got kids, we’ve got teenagers — into the Rio Grande by these men on horseback. When we saw you in that clip of you outside the Capitol, you were with the Congressional Black Caucus. Had you been to the White House? What is Biden saying? Do you have access to the president at this point?

AMY GOODMAN: Well, Congressmember Waters, I want to thank you for being with us. Of course, we’re going to continue to cover this extensively. Congressmember Waters is talking about the 2004 trip. I covered her flying in a small plane with Randall Robinson of TransAfrica and a Jamaican parliamentarian. We flew to the Central African Republic, where President Aristide was flown in a military plane in a coup against Aristide in Haiti by the U.S. military. They brought him back to the Western Hemisphere. You can go to democracynow.org to see the story of that journey and my interview with President Aristide at the time. California Democratic Congresswoman Maxine Waters, thank you so much for being with us.

That does it for our show. I’m Amy Goodman. Stay safe. Wear a mask. Protect the whole community. 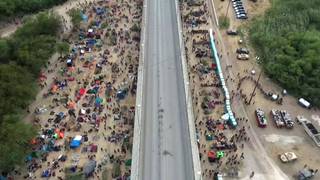