The documentary “Takeover,” which chronicles the radical actions of the Young Lords, was recently shortlisted for an Academy Award. In 1970, the Puerto Rican collective took over a condemned hospital in the South Bronx to demand the construction of a new hospital, free healthcare for all, and more. “I’m still amazed there’s been so much interest in what we did as youngsters more than 50 years ago,” says Democracy Now! co-host and Young Lords founding member Juan González. “I hope that some of the lessons of what we did right and what we did wrong will resonate with younger people these days.”

AMY GOODMAN: Before we go, Juan, I just wanted to say congratulations. The documentary that you are featured in, which is called Takeover, directed by Emma Francis-Snyder, has just been shortlisted for Academy Award.

The documentary follows the 12 historic hours on July 14, 1970, when members of the Young Lords — which included Juan at the time — took over the rundown Lincoln Hospital in the South Bronx. The Young Lords were the radical group founded by Puerto Ricans, modeled on the Black Panther Party, in New York, co-founded by Juan González, Democracy Now! co-host. They drove out the administrative staff, barricaded the entrances of the hospital, made their cries for decent healthcare known to the world.

This is the trailer. Listen carefully and see if you can pick out Juan’s voice.

NARRATOR: This is a story from New York, not the New York of Manhattan’s Broadway, but for perhaps the toughest square mile in the city, in the South Bronx.

CARLITO ROVIRA: I was 14 years old when I joined the Young Lords. The Young Lords were a street gang that became politicized by the Black Panther Party.

We became visible as servants of the people.

One of our targets was Lincoln Hospital.

IRIS MORALES: That building was condemned 25 years ago. Condemned. Condemned for rich people and opened up for poor people.

UNIDENTIFIED: It was a place that you went to to die.

UNIDENTIFIED: And there was a rat in the emergency room.

DR. LEWIS FRAAD: We have seen children get lead poisoning while hospitalized at Lincoln Hospital.

JUAN GONZÁLEZ: We felt now was the time for us to say exactly how we’re going to respond to the killings of our people.

CARLITO ROVIRA: Our plan was to take over Lincoln Hospital.

JUAN GONZÁLEZ: We have to begin to stand up for the people, the Puerto Rican people, and say, “That’s enough. That’s enough.”

CLEO SILVERS: We have been asking for changes to take place. And you’ve paid no attention to us. You’ve thrown us out of your offices, and you’ve called the cops on us. And now we’re putting you out. We’ve taken over the hospital. We’re going to run it. You’re out. And I will walk you to your car.

JUAN GONZÁLEZ: We immediately announced that we were not leaving until the city made a firm commitment to build a new hospital.

About a thousand police were on roofs with high-powered rifles. They had vans all over the place.

If the police came in, it was going to be a bloodbath, because the police hated the Young Lords.

CLEO SILVERS: We were terrified.

JUAN GONZÁLEZ: “Power to the people” means including people to gain control of their destiny.

The Young Lords were ahead of our time in terms of recognizing that healthcare is a right.

DENISE OLIVER-VELEZ: We wanted a revolutionary change to the health system in this country. And we still do.

CARLITO ROVIRA: Because no oppressor is invincible.

AMY GOODMAN: So, that’s the trailer for Takeover_, again, just shortlisted for an Academy Award. It’s up for nomination. The judges are deciding now. Juan, we did a segmenthospital on this that I encourage people to go to. But in these last minutes — the last minute we have, your response to this recognition? It’s nominated in the documentary shorts category.

JUAN GONZÁLEZ: Well, Amy, it’s clearly great news. I’m still amazed that there’s been so much interest in what we did as youngsters more than 50 years ago. And I hope that some of the lessons of what we did right and what we did wrong will resonate with younger people these days.

AMY GOODMAN: Well, again, congratulations. And that film is called — the documentary short is called Takeover.

That does it for today’s show. Democracy Now! has job openings. You can go to democracynow.org to about the applications for human resources manager. You can learn more and apply at democracynow.org. 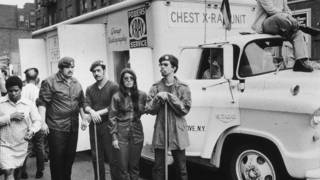