The French humanitarian group Utopia 56 has filed a manslaughter lawsuit against British and French officials for failing to help 27 migrants who drowned to death in the English Channel in November. The only two survivors say they were ignored when they made distress calls and told their location to French and English rescue services after their boat capsized and started sinking in the freezing waters off the French port city of Calais. We speak with Nikolaï Posner of Utopia 56, who says the lawsuit is meant to “bring the truth and the transparency on what happened.”

AMY GOODMAN: This is Democracy Now! I’m Amy Goodman, with Juan González, as we turn to Europe, where a remarkable new legal complaint accuses Britain and France of failure to help people in need, to the 27 refugees who drowned when the boat they were in capsized while trying to cross the English Channel in November. At least three of the victims were children. It was the biggest single loss of life in the channel, according to the International Organization for Migration.

The complaint also accuses authorities of involuntary manslaughter. According to the only two survivors, refugees made distress calls to French and English rescue services after their boat capsized and started sinking in the freezing waters off the French port city of Calais. They were ignored. At least two of the group were able to call British authorities and tell them their location. One of the refugees who drowned, Shakar Ali Pirot, sent this voice message to his family in Iraq. His message is believed to be the last known communication from the boat.

SHAKAR ALI PIROT: [translated] We are still in the sea between the U.K. and France. We are not sure who’s coming to rescue us. If you haven’t heard from me, we are in the U.K. I will throw this phone away. If we stay in French waters, I will answer you.

AMY GOODMAN: Pirot said if he made it to British shores, he would throw his phone into the water, keeping with a demand that is reportedly often made [to] migrants by smugglers concerned with protecting their identities. At least 16 bodies of Kurdish migrants who drowned in the disaster were returned to Iraq just over a week ago, where they were greeted by grieving family members and friends. This is Zana Muhammed, brother of one of the drowned migrants.

ZANA MUHAMMED: [translated] They all had phones, internet and SIM cards, and they could have located them before they drowned. And they actually called the French police and the British police, so we feel that the police betrayed us, because they went to them 12 hours after they drowned. So, after these 12 hours, they were dead.

AMY GOODMAN: Now a new lawsuit filed by the French humanitarian group Utopia 56 aims to hold authorities accountable for the deaths. This is attorney Emmanuel Daoud.

EMMANUEL DAOUD: [translated] We’re saying that from the moment the rescue services, English and French, were informed between 2 and 3 a.m. that this boat was in distress, it would have been necessary, and it is a legal obligation, that they coordinate and intervene. That was not the case.

AMY GOODMAN: For more, we go to Paris to speak with Nikolaï Posner, communications coordinator for Utopia 56, the French humanitarian group focusing on refugee rights that’s filed the complaint.

Nikolaï, welcome to Democracy Now! If you can explain what happened and what your demands are now, this horror that took place?

NIKOLAÏ POSNER: Well, as you just said, I mean, on that night — first you have to know that there is people trying to cross every day. Since the beginning of this year, we had 30,000 people reaching U.K. through the sea. So this is actually very common. As soon as the weather is considered good, people are trying to cross on the boats that you can see in the Mediterranean Sea, over 50 to 60 people over a boat sometimes.

What happened that night is that, so, those people have been trying to cross. And once they were in the water and in trouble with their boat, they tried to contact both authorities, so French and English. And both [inaudible] share the responsibility of coming to save them. And actually no one came. So, we have those testimonies first. And then, what we have, as well, is that four days before, on the 20th of November, we were facing the same situation. People on a boat have been contacting our volunteers, calling for help, saying, “We are contacting both authorities, and no one is responding.”

So, we wanted to just make sure to carry the voice of the families first to relatives back in Iraq, in Iran, Afghanistan, Vietnam, Egypt, to carry their voice and to bring the truth and the transparency on what happened, also that our society has to keep our eyes open on the real situation of what is happening there. There is a system of mistreatment and violence that is installed by our politics, that we deeply have to change and that push to those tragedies. So, at the moment, what the state does, just after the tragedy, is that they point at the smugglers. But the smugglers are consequences of the politics that are harming. So, as soon as we saw — or, as soon as we saw that something was actually missing into the secure — well, the response to save the people, we wanted to make sure that this will mark a point, to say to our governments that people are looking at the situation, and we will not let this happen again and again.

JUAN GONZÁLEZ: And, Nikolaï, could you talk about what countries the refugees are coming from, those who are trying to cross the channel? And why are they bent on getting to the U.K. when they are already within the European Union? Is there sense that they would have a more welcoming situation in the U.K. than they would in France or Germany?

NIKOLAÏ POSNER: Yeah. So, well, you have people from all different region in conflicts, so it’s mostly people from Sudan, from Eritrea, Afghanistan, a lot of people from Iraq, Iran, from mostly Kurdistan. And all those people, of course, have been crossing different countries in Europe but couldn’t find a safe place.

And so, why the people are trying to cross to England? For most of them, it’s to run away from the system that is not welcoming in Europe at the moment. You have to know that in Europe there are some procedures that make it almost impossible for you to apply in another country than the first one you arrived, which is, for most of the time, Italy, Greece or Spain. And then, as soon as you move to another country, this country must send you back to the first country you arrived. So, at the moment, actually, England becomes the last exit for the people to actually being able to apply for asylum. And so those people are running away from those administrative systems we have in Europe to actually being able to apply.

And the second reason is, for example, in France, if you apply for asylum, you know that you will spend days and weeks and months in the street before you get actually a shelter, when, actually, if you cross to England, but also different other countries of Europe, you will get a shelter. You will get protection. So, at this moment in France, we have a system that actually push the people away. That’s our strategy, is to push the people away, a maximum, for the next one to not come again. But this doesn’t work, because, for now, because of the situation of those regions in the world, we are still in a better situation, and we will probably stay that way. So, if we really want the people to not come, should we become in a worse situation than Afghanistan or Sudan? I think the only answer that now is offered to the people doesn’t fit, and so push those people to go to England.

JUAN GONZÁLEZ: And quickly — we just have about 20 seconds — but can you characterize the anti-immigrant climate in France right now?

NIKOLAÏ POSNER: Well, you know, we have election in three months. And the anti-speech is based on hatred. It’s based on splitting the people to make the people fight against each other. The migrants are supposed to be responsible of all the difficulties our society can face, which is a complete lie and which will just destroy, first, the life of those people and then, of course, the society as a whole. So, I mean, the only solution to come over this situation is to actually welcome the people and to behave with care. But this, at the moment, sadly, our governments are not ready.

AMY GOODMAN: Nikolaï Posner, we want to thank you for being with us, with the French humanitarian group Utopia 56.

And we end today’s show with condolences for our dear co-host at Democracy Now!, Nermeen Shaikh, on the death of her khala, her aunt, Parveen Sharwani, in Pakistan. All the best to you and your family, Nermeen. 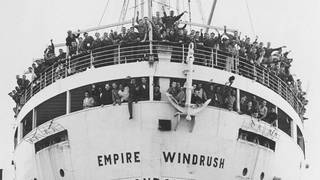