We speak with prominent Ukrainian climate scientist Svitlana Krakovska at the U.N. climate conference in Sharm el-Sheikh, Egypt, about how the Russian war in Ukraine has intensified calls to transition from fossil fuels to renewable energy. Krakovska is the head of the delegation of Ukraine to the Intergovernmental Panel on Climate Change, or IPCC. “Fossil fuels: it’s a root, it’s an enabler of the Russian war on Ukraine,” says Krakovska, adding that she feels hopeful that the conference will bring politicians and scientists together to instill positive change.

AMY GOODMAN: We are joined, as well, by another Svitlana, Svitlana Krakovska, the head of the delegation of Ukraine to the Intergovernmental Panel on Climate Change, or IPCC. She is one of Ukraine’s leading climate scientists, a senior scientist at the National Antarctic Scientific Center and head of the Applied Climatology Laboratory in Ukraine.

You are still inside the summit. You spent eight years on this last report. You were getting ready to deliver it. Russia invaded Ukraine. Can you talk about what it was like as you and other Ukrainian scientists tried to release this report as the bombs were falling on your city, the capital, Kyiv?

SVITLANA KRAKOVSKA: Well, first of all, thank you for inviting me. And actually, you really asked the question which is — you know, it was a terrible situation for me, because I was head of delegation on this U.N. summit, and we were just about, you know, approving this report about vulnerability, impact and adaptation, and these bombs started to fall on Kyiv. So, I was so angry, to be honest. At that moment, I was so angry that on top of all problems we have now on our planet, in our society, we now have war, which is much more, you know, important for us as Ukrainian scientists at that moment, and, of course, for all on this planet, because this war is — I was thinking, you know, ahead, and I was project that we will have after, in a few days, in a few weeks, in a few months, what we have now. And it’s exactly what we have now, actually.

AMY GOODMAN: You have called Ukraine’s war a climate — a fossil fuel war. Explain what you mean.

SVITLANA KRAKOVSKA: First of all, I would say that it’s not Ukraine’s war. So, this is a Russian war on Ukraine. So, this is big difference, in fact. And the [inaudible]. It was very clear for me from very beginning, because I am climate scientist, that Russia can do and she’s able to do this war just because she has enough money, enough — and big army, actually. And this army was built just because Russia has so good — OK, good, now not good, but fossil fuels, which she actually sold to other countries.

So, it means, for me, that fossil fuels, it’s a root, it’s enabler of the war, of Russia war on Ukraine. At the same time, fossil fuels is the cause of climate change. So, for me, it was clear, this connection. And now I am really very happy that it is clear for many people in the world, and now we are, I hope, about to finish our dependency on fossil fuels.

AMY GOODMAN: I mean, your science is so important to you, Svitlana. You decided not to leave Kyiv. You have four children?

SVITLANA KRAKOVSKA: Yeah, I have four children, actually. And yeah, we decided to stay in Kyiv. Again, I said I was angry. I was angry because I didn’t want to leave my native city, where I was born, where my children were born, actually, just because somebody wants me to leave, you know. And, of course, it was not — you know, it was a conscious, actually, decision, because we were — we were thinking, with my husband, and just estimating risks, you know? As climate risk, we were estimating risk for our family, for my children. And after all, we decided that, OK, we will manage this risk inside the city. So we put straps on our windows. We were in the corridors. My daughter spent a few months in a bathroom, just living there with her cats, actually, while I was giving, I don’t know, hundred of interviews from my flat just to show people how it is to be inside, actually.

And at the same time, I asked people, “Don’t stop to fight climate change,” because when we were — and we’re still — in this war in Ukraine, of course, it’s our threat right now, but climate change will not stop. So it means that other nations should make more, on our behalf, as well.

But now, actually, I’m really happy. I didn’t speak about climate change in Ukraine half-year from the full-scale invasion. But now here at COP, Ukraine first time had its own pavilion, where we made a lot of — every day, we had few events, and I organized these events. And these events were about recovery, about green transition, about our future. And this is really essential for us in Ukraine to think about future and this better future, actually, on this green way.

SVITLANA KRAKOVSKA: I should say that this COP — well, I don’t have too much, you know, experience in COP. I am a scientist. I am not political. I do even science in IPCC, as well. So, for me, it is the second COP. I remember my first, just a year ago, and I was really very — you know, I was surprised how we were listened as scientists. And now I see it’s even more that politicians start to listen to science. And I hope, actually, they — because they are not only politicians; they’re humans, as well. And they’re impacted by and they see all this impact of climate change. So, I see these good signs of changing, to be honest.

I understand that we all — science and the all civil society, we need to continue to push them to make more, to be more active, but at the same time I understand that many actions should be very well, you know, think in advance, because maladaptation could be actually happen in this world, as well. So we need — climate system is a very complex system, and we need to think carefully and really rely on science.

AMY GOODMAN: Are you returning to Kyiv after this U.N. climate summit?

SVITLANA KRAKOVSKA: Yes, I will return to Kyiv, to Kyiv where, yeah, my family now almost more than half-day without electricity in cold flats, with first snow, which is not too much, you know, happy, as they are for — and, well, but, anyway, I mean, I’m a positive person, and I am really optimistic in my soul, I would say. I saw here and I met here so many prominent scientists and activists. I pretty believe that we can do it together. And again, I can say it from our Ukrainian perspective. From the very beginning of this war, we were so much united, all, because, before, we argued a lot inside society. We were not pleased with our government, our president. But then we were united. And with this, we are winning now. So I really believe that if we all in the world will unite, we will win this fight, as well.

AMY GOODMAN: Well, Svitlana Krakovska, I want to thank you so much for being with us, head of the delegation of Ukraine to the Intergovernmental Panel on Climate Change, or IPCC. She is one of Ukraine’s leading climate scientists.

Next up, we speak with a prominent Russian environmentalist. He’s here at the COP but living in exile. Stay with us. 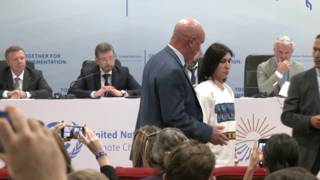