World Cup in Qatar Is “Deadliest Major Sporting Event” in History, Built on a Decade of Forced Labor

As the World Cup begins, we look at the host country of Qatar’s labor and human rights record. “This is the deadliest major sporting event, possibly ever, in history,” says Minky Worden of Human Rights Watch, who describes how millions of migrant workers from the world’s poorest countries have faced deadly and forced labor conditions working on the $2 billion infrastructure. By one count, 6,500 migrant workers have died in Qatar since 2010, when it was awarded the right to host the games. “These are unprecedented labor rights abuses,” says Worden, who claims “there’s no ability if you’re a migrant worker in Qatar to strike for your basic human rights.”

StoryDec 15, 2022Why Has Qatar Jailed a World Cup Whistleblower? The Brother of Abdullah Ibhais Speaks Out

But we’re going to look now at the 2022 World Cup, which started Sunday in Qatar, with fans from around the globe attending the month-long soccer, or football, tournament. This is the first time the games will be played in the winter, due to Qatar’s extreme summer temperatures. Qatar is the first country in the Middle East to host the World Cup. It won its bid to host the games a decade ago, in December 2010, shortly before the Arab Spring protests erupted. The small nation draws its wealth from sales of liquified natural gas, hosts the forward headquarters of the U.S. military Central Command.

Today, the teams of England, Wales, Belgium, Denmark, Germany, the Netherlands, Switzerland announced their captains will not wear armbands during the World Cup games in support of LGBTQ rights, after tournament organizer FIFA said players who wear the bands will be sanctioned. Homosexuality is illegal in Qatar. Human Rights Watch found that as recently as September, Qatari security forces had arrested and abused LGBT people in detention.

This comes as Qatar and FIFA have faced years of protest over conditions faced by migrant workers subjected to forced labor to build its stadiums. On Saturday, the FIFA president, Gianni Infantino, opened a news conference in Doha, Qatar, with a stunning hour-long monologue.

AMY GOODMAN: So, that’s FIFA President Gianni Infantino, speaking Saturday. He also said FIFA would establish a legacy fund after the World Cup to compensate workers and their families who faced abuse and even death while building the World Cup stadiums in Qatar. This is a former migrant worker named Hari featured in a “report”: by Human Rights Watch.

HARI: [translated] When I went to Lusail in Qatar, there was nothing. There wasn’t even a single building. Now there are towers everywhere. We built those towers. In the heat, we worked out of compulsion with face covers. We were drenched in sweat. We poured water, sweat, from our shoes. Even in that heat, we worked hard.

My son did not recognize me when I first came from Qatar to Nepal. My son’s aim is to play football, so I went to watch him play for little bit. I met my son only five times in the 14 years I was away. I used to cry and feel bad that I had to stay away from children for work.

AMY GOODMAN: A multi-country investigation by The Guardian found between 2010 and 2020, almost 6,500 migrant workers from India, Pakistan, Nepal, Bangladesh and Sri Lanka have died in Qatar. This is Nanda Kali Nepali, whose husband was one of those deaths.

NANDA KALI NEPALI: [translated] My husband used to work as a driver. He used to come for two months every two years. This time, only his dead body came, four years after he had last visited Nepal. What would he say? He used to say, “I will work here ’til I can. We have loans we need to repay.” My husband was my source of support. Without him, who do I rely on? I sit and I cry on my own. Whom can I show my tears to?

AMY GOODMAN: For more, we’re joined by Minky Worden. She’s director of global initiatives at Human Rights Watch. She’s been researching human rights violations around the World Cup. Her article for Newsweek is headlined “The World Cup is Exciting, Lucrative, and Deadly.”

Minky, welcome back to Democracy Now! Just lay out what you have found.

MINKY WORDEN: So, for starters, this is the deadliest major sporting event possibly ever in history. It’s scheduled to be watched by 5 billion people worldwide. But fans of football, or soccer, absolutely cannot forget the high human cost to deliver this World Cup and that it takes place against a backdrop of completely unacceptable discrimination against LGBT people, a lack of protections for women’s rights — Qatar has a male guardianship system — and, of course, a lack of press freedom to investigate migrant labor abuses.

You mentioned at the outset that FIFA has committed to a legacy fund. There’s no indication right now that that legacy fund will actually go to the thousands — to the families of thousands of migrant workers who lost their lives to deliver this World Cup.

AMY GOODMAN: So, talk about what you understand how the system works. From 2010 to '20, something like 6,500 workers died in Qatar, not necessarily all of them building the stadiums, but many. Explain what the illegal loans and debt bondage system for workers in Qatar is, and why Qatar is saying they've changed their system.

MINKY WORDEN: Well, Qatar has passed some modest labor law improvements, but they have not gotten rid of the kafala system. The kafala system was in place in 2010 when FIFA awarded the World Cup to Qatar, and it has continued through to today. What this is is it’s a system of modern-day slavery. It has features like, in the case of many workers, they had to take out loans to work in Qatar. So, these could be loans anywhere from $700 to $4,000 U.S. dollars, but that would be a crushing loan that you would have to work, in some cases, for years to repay. Some of the saddest cases that Human Rights Watch has seen are families where the main breadwinner, a young man, went to Qatar, took out a loan to work there, worked in debt bondage, was cheated of wages, did not receive the waes he was promised, and then his body returned home to his family in a coffin. So, these cases, these are utterly preventable labor rights abuses.

And one other major point, the reason this has happened is, in 2010, and still today, there are no trade unions. Trade unions for migrant workers are illegal. And also there’s no striking. So it’s illegal to strike. So, even if you are working in deadly conditions, if you think you’re going to have a heart attack, or you’re experiencing heat stress from working in more than 120 degrees Fahrenheit, or 50 degrees Celsius, even if you’re working in dangerous and even deadly conditions, there’s no ability, if you’re a migrant worker in Qatar, to strike for your basic human rights.

AMY GOODMAN: The government of Qatar has refused to do autopsies on the workers who die as they’re working?

MINKY WORDEN: Yeah, this is — I mean, it’s difficult to understand how there could be thousands of deaths and how they couldn’t be well documented. But when you understand the system of labor exploitation that was present in Qatar, it’s actually very easy to understand.

So, there’s a workforce at any given time of 2 million migrant laborers, and then the population is about 250,000 or 300,000. So that means 90 to 95% of the workforce are migrant laborers. And they’re coming from some of the world’s poorest countries: India, Nepal, Bangladesh, the Philippines, Ghana, Kenya. And these are migrant workers who are leaving home for years at a time to make a better future for their children.

But once they arrive there, they find that they’re in control of the sponsoring company, which is exploiting them. And there’s really — many of the workers have described to us, or as you saw on the video, they’re working in deadly conditions, but there’s no way to protest, and there’s no way out.

AMY GOODMAN: The FIFA president, we just played, Gianni Infantino, opened the Saturday news conference with a stunning hour-long monologue. He said Qatar is offering migrants the opportunity to provide for their families, whereas Europe has closed its borders. If you can talk about this, and also why this oil-rich nation cannot afford to pay a living wages to its workers?

MINKY WORDEN: So, the last question first. The system that was in place, so, there was an absolute concentration, unprecedented concentration, of construction to build this World Cup that started in 2010. Those Qatari companies were — and remember, migrant workers had no basic human rights. Those Qatari companies were competing against each other for the lowest cost. I think every country can do a better job of respecting the rights of migrant workers, but we’ve never before seen such a concentration of construction. And to be clear, this is at least $220 billion of construction. So, it’s eight new stadiums, where they previously didn’t exist in the desert. It’s hundreds of miles of railways, highways, hundreds of new hotels, office towers springing up. So, the construction was unprecedented for this World Cup. You can broadly call it infrastructure.

And the situation for migrant workers was that they really were desperate to earn money and, once they were there, had no — in some cases, we documented families — the workers begged the sponsors to send them home.

AMY GOODMAN: Minky Worden, we want to thank you for being with us. Of course, we’re going to continue to cover this story. Minky Worden is director of global initiatives at Human Rights Watch.

That does it for our show. Special thanks to Sharif Abdel Kouddous, Hany Massoud, Denis Moynihan, Nermeen Shaikh, here in Cairo, our whole team in New York. I’m Amy Goodman. Thanks so much for joining us.

Why Has Qatar Jailed a World Cup Whistleblower? The Brother of Abdullah Ibhais Speaks Out 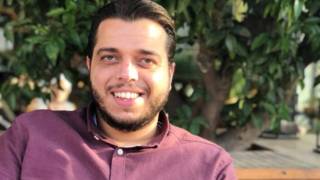 Why Has Qatar Jailed a World Cup Whistleblower? The Brother of Abdullah Ibhais Speaks Out