The House select committee on the January 6 attack released its final 845-page report Thursday, and the word “racism” appears only once throughout the entire document — despite the central role white supremacist groups played in the insurrection. “Those who stormed the Capitol … didn’t merely come in defense of Donald Trump,” says Stanford professor Hakeem Jefferson, an expert on issues of race and identity in American politics. “They came in defense of white supremacy and white Americans’ hold on power.”

AMY GOODMAN: This is Democracy Now!, democracynow.org. We’re continuing to look at the new January 6th report, which details how white supremacist groups played a key role in the insurrection. But the report says little about the role of racism in what happened. In fact, the word “racism” appears only once in the report.

The committee chair, Bennie Thompson, writes in his introduction, quote, “I believe most Americans will turn their backs on those enemies of democracy.

“But some will rally to the side of the election deniers, and when I think about who some of those people are, it troubles me deep inside. White supremacists. Violent extremists. Groups that subscribe to racism, anti-Semitism, and violent conspiracy theories; those who would march through the halls of the Capitol waving the Confederate battle flag,” Thompson wrote.

Well, to talk more about the January 6th report, we’re joined now by Hakeem Jefferson, an assistant professor at Stanford University, faculty affiliate with the Center for Comparative Study in Race and Ethnicity and the Center for Democracy, Development and the Rule of Law.

We welcome you to Democracy Now! It’s great to have you with this, Professor Jefferson.

HAKEEM JEFFERSON: Thank you so much for having me.

HAKEEM JEFFERSON: Thank you so much for having me, Amy. It’s a real honor to be here.

When I wrote my initial piece about January the 6th the day of the insurrection, I wrote that piece because I worried so much that what would get lost in the shuffle as we talked about this spectacular event was the role of race and racism.

It’s striking, the image of Bennie Thompson as the chair of the January 6th committee, a Southern Black man leading the charge to investigate the insurrection. And it’s not surprising that it is in his opening remarks of the report that we see the word “racism” emerge. We see him telling the story about an insurrection that has far deeper roots than simply the fact that Donald Trump wanted to hold on to power.

And so, what I worried would get lost in the shuffle, and what I think enough people haven’t attended to, is how much the insurrection reflects these deep resentments and the sort of long-standing grievance that so many white Americans have when they worry and are anxious about what they perceive to be a precarious hold on power. Put simply, those who stormed the Capitol, as I wrote in a piece for FiveThirtyEight the day of the insurrection, they didn’t merely come in defense of Donald Trump; they came in defense of white supremacy and white Americans’ hold on power, and a hold on power that is not in competition with other racial groups.

AMY GOODMAN: Professor Jefferson, we’re speaking to you actually in Sumter, South Carolina. Bennie Thompson, of course, represents Mississippi, the committee chair. If you can talk more about who these groups are? You know, I just asked John Nichols about the chair of the Joint Chiefs of Staff, Milley, saying he was saying, “Why are these guys, the Proud Boys, why are the Oath Keepers, why are they even allowed to be there?” Also, you know, there was word that many people were armed. If you could comment on this?

HAKEEM JEFFERSON: Yeah, I mean, these are far-right extremist groups. The Proud Boys sort of outwardly say that they’re not a white supremacist group. They have engaged, however, in activities that align with white supremacist and white nationalist ideologies. These are groups that hold a kind of mantle of traditional masculinity. They wield a kind of conservatism and traditionalism that hold up the mantle of Western values. These are groups who you don’t need a Ph.D. to understand their ideology. These are groups that are really OK with a kind of racial hierarchy in this country, want to sustain a kind of hierarchy where white men are empowered. And Donald Trump embodied the values of these groups. We will recall that he said to “Stand by” — “Stand down, and stand by” to these groups. He made no secret of his at least tacit allegiance with the ideologies that these groups pressed.

And so, when January 6th comes, it’s no surprise that leading the charge — and I mean that literally, leading the charge — to obstruct democracy were members of these groups, who had planned for some time, in Reddit groups and in other dark places of the internet had planned the insurrection, had talked about violence, had talked about killing Nancy Pelosi and Mike Pence, if he didn’t do his duties that day as they saw fit. And so, these are groups who have long held these ideologies, who on the day of the insurrection led the charge, and who, if only — if not for luck that we had that day, would have carried out, I think, even more violence in service of protecting and defending Donald Trump’s legacy, but also in holding up the mantle of white supremacy and white nationalism.

AMY GOODMAN: Can you talk about Bennie Thompson being chair of the select committee that is trying to hold President Trump to account, Bennie Thompson of Mississippi, who often requotes the late great John Lewis talking about —

HAKEEM JEFFERSON: Amy, it is such a visual — a striking visual to see, in what is one of the most powerful committees that the Congress has ever had, this Southern Black man, who speaks with a Southern drawl, who can talk about racism not merely because he studied it but because he lived it in the American South, and to have him lead this committee where race and racism were at the fore, if only because we were forced to engage with the real power and politics of Bennie Thompson, an imposing, if soft-spoken, Black man, who I think will go down in the history books as having led a committee that did really important work.

And so, I am, as you noted, currently in Sumter, South Carolina, a place that has its own racial history. And I think Bennie Thompson brought that history with him, that history of race and racism in the American South, to his duties as chair of this committee. And as I noted earlier, it’s not striking that the one time — it’s not surprising, I should say, that the one time that racism is mentioned in the report is by Bennie Thompson, a person who saw, I think, Donald Trump for exactly who he is — a political elite sort of showered in privilege, showered in a sense of entitlement, and showered in a sense of whiteness and of white supremacy, a sense that people like him should wield power in this country. And I don’t think that was lost on Bennie Thompson, and I think that comes through rather clearly in those remarks that you shared with us from his opening comments in the report.

AMY GOODMAN: In this last moment we have — you are a professor — how do you want this historical moment to be remembered and to be taught, and what you want to come out of this, with now the House committee referring criminal charges against Donald Trump to the Justice Department?

HAKEEM JEFFERSON: I think that as I reflect on this moment, and what I’ve told my students, and as I’ve written elsewhere, is that we would be missing something really important if what we left this moment with was just the sense that this really spectacular event happened on January the 6th, that it was something unique that happened that day. Instead, I think what we should take from this moment is something that I wrote with Victor Ray, again at FiveThirtyEight, which is that moments of progress in this country are often met with moments of backlash, that backlash — white backlash, in particular — is a racial reckoning, too, as Victor and I wrote.

And so, I think what I want people to leave this moment thinking about is: What are those other instances of racial backlash that we have experienced in this country or are experiencing in this country? Republican attacks on the right to vote, a racial backlash. The kind of racial violence that we’ve seen in corners across the country, that’s a racial backlash, too. The sort of daily workings against democracy, particularly those advanced by the Republican Party, we should see those in the same vein that we see the spectacular attack on January the 6th. This is a racial backlash. This is about a racial ordering and a racial hierarchy. It is about power. It is about the maintenance of group status. It is about the defense of whiteness. And that has a long through-line in American history, that comes in spectacular form on January the 6th, but manifests in more mundane and quotidian ways every day in American life. And I think that’s the lesson of this moment that shouldn’t be lost on any of us.

AMY GOODMAN: Hakeem Jefferson, we want to thank you for being with us, assistant professor at Stanford University, faculty affiliate at Stanford’s Center for Comparative Study in Race and Ethnicity and the Center for Democracy, Development and the Rule of Law, speaking to us from Sumter, South Carolina.

Coming up, “The Quest to Defuse Guyana’s Carbon Bomb.” We’ll look at efforts to prevent ExxonMobil from drilling off the shore of Guyana, where more than 11 billion barrels of oil have been discovered. Back in 30 seconds. 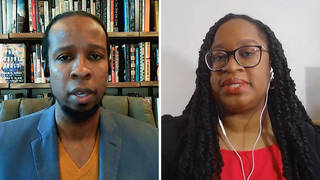